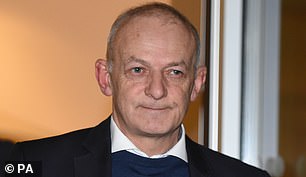 Ousted Stobart Andrew Tinkler, has bought a 12.23 per cent stake in Flybe

Stobart Group’s former boss bought a stake in Flybe hours after his previous employer and Virgin announced they would buy the struggling airline for £2.2million.

Andrew Tinkler, who was kicked off the Stobart board last year, bought a 12.23 per cent stake, or 26.5m shares, in the airline on Friday.

The price he paid has not been disclosed although the stake is worth £1.1million.

The dispute between Tinkler and Stobart resulted in the firm suing him last year for breaching his duties and allegedly conspiring to harm the business.

Tinkler denied the claims and counter-sued.

The judge’s decision is thought to be due in February.

Tinkler said: ‘My investment in Flybe has nothing to do with the ongoing dispute with Stobart Group. It is purely an investment decision.’