The number of shoppers trudging around Britain’s High Streets, shopping centres and retail parks fell to the lowest level for five years in February.

Footfall fell by 2 per cent last month, marking the fifteenth month of consecutive decline and a noticeably worse drop than the 0.2 per cent dip seen at the same time a year ago, BRC-Springboard’s latest figures show.

Separate research by accountancy firm BDO revealed that in-store sales across the country’s High Streets fell by 3.7 per cent year-on-year in February, marking the worst performance in a decade. 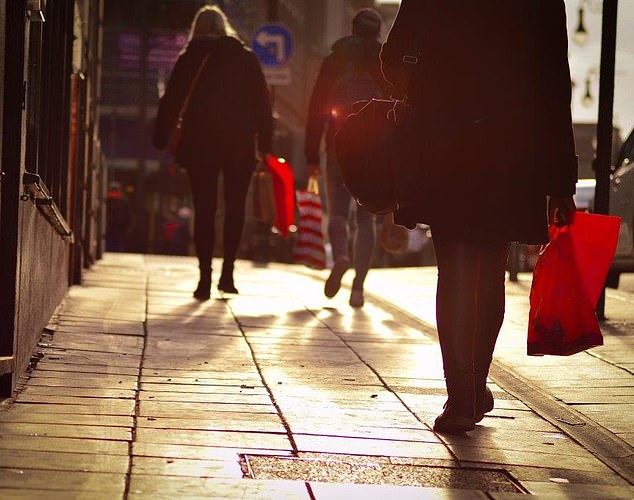 In the doldrums: The number of shoppers trudging around Britain’s High Streets, shopping centres and retail parks fell to the lowest level for five years in February

Helen Dickinson OBE, chief executive of the British Retail Consortium, said: ‘While real incomes have been rising over the last year, the uncertainty surrounding Brexit appears to be driving a needs-not-wants approach to shopping.

‘Things could get a lot worse unless the Government is able to avoid a calamitous no deal Brexit.

‘Such a scenario would likely result in higher costs, higher prices and less choice for consumers – all of which would further harm struggling retailers.

‘The Government must act to protect both consumers and retailers by ensuring there is no chance of a no deal Brexit.’

The last year or so has been calamitous for retailers.

High-profile brands including Toys R Us, Maplin, Patisserie Valerie and Poundworld have all gone bust, while Sports Direct owner Mike Ashley swooped in to snap up stricken House of Fraser for £90million in August.

Last week, one of the Duchess of Cambridge’s favourites, LK Bennett, confirmed it had collapsed into the hands of administrators at Ernest & Young.

Meanwhile, bosses at the John Lewis Partnership slashed bonuses to the lowest level since 1953 amid a 45 per cent drop in annual profits to £160million.

On Friday, Sports Direct boss Mike Ashley used a stock exchange announcement to call a Debenhams shareholder meeting to oust nearly all its directors and install himself as chief executive. 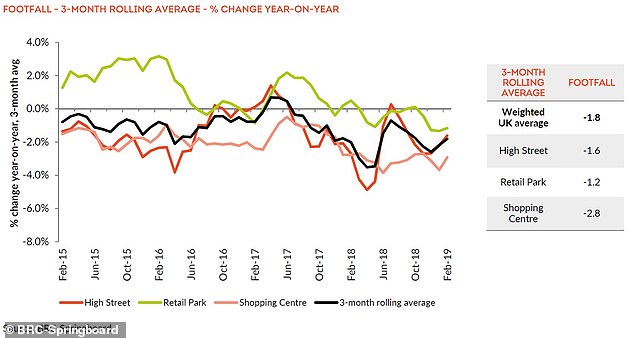 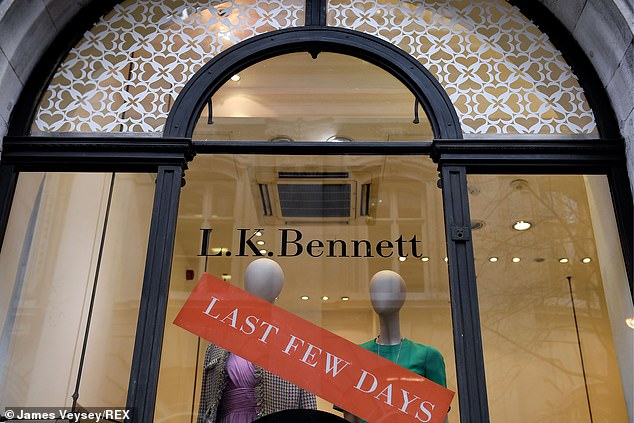 Down and out? LK Bennett collapsed into the hands of administrators last week 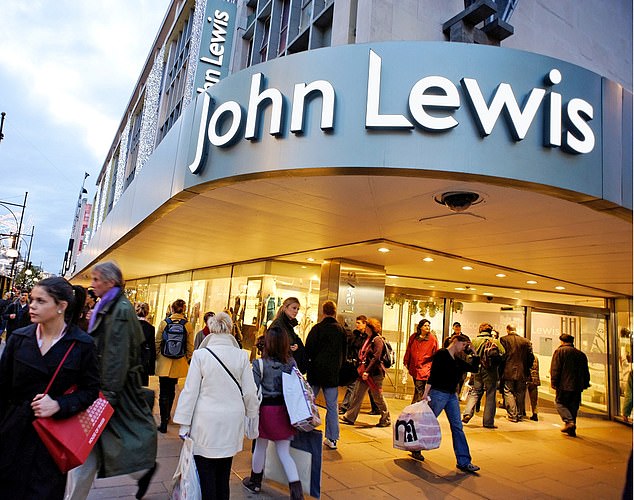 Cuts: Bosses at the John Lewis Partnership cut bonuses to the lowest since 1953

With retailers collapsing, scaling down their High Street property portfolios or issuing profit warnings left, right and centre, the latest figures from Springboard and BDO should come as no great surprise.

According to Springboard, High Street footfall fell by 1.9 per cent in February, marking seven consecutive months of decline. At the same point a year ago, footfall in this sector was down 1.2 per cent.

Shopping centre footfall dropped by 3.4 per cent, against last year’s comparative figure of 0.9 per cent. No region in the country experienced growth in this sector.

Retail parks footfall slipped by 0.8 per cent in February, marking a ‘sharp decline’ on last year when it grew by 1.4 per cent, Springboard said. The East Midlands and Wales experienced notable growth in this area, with retail park footfall up 3 per cent and 1.4 per cent respectively.

With Springboard recording a total footfall drop of 2 per cent, Diane Wehrle, the group’s marketing and insights director, said: ‘The -2% drop in footfall in February – a significant worsening from -0.5% in February 2018 – occurred despite the fact that February this year was the hottest on record.’ 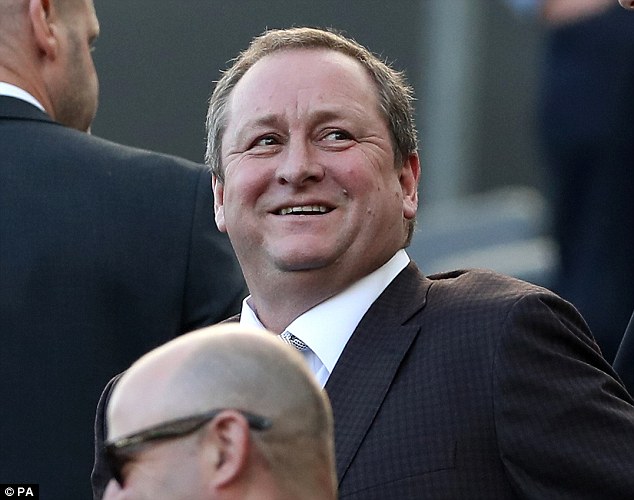 Meeting: Sports Direct boss Mike Ashley used a stock exchange announcement to call a Debenhams shareholder meeting to oust nearly all its directors and install himself as chief executive 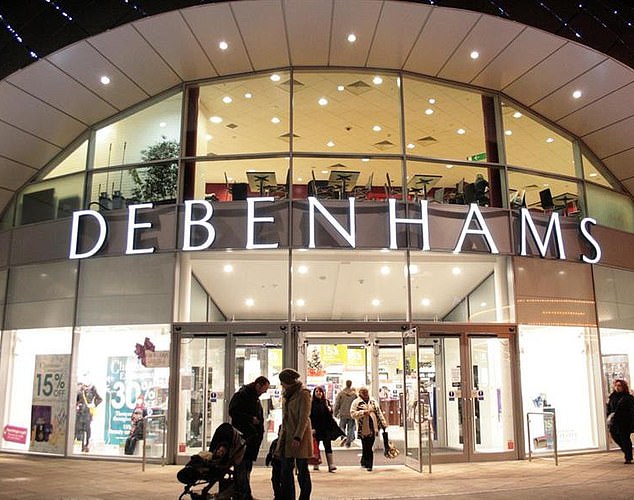 Dropping fast: In-store retailer sales were down 3.7 per cent on February last year, according to BDO

The BDO’s figures suggest that High Street retailers suffered their worst February in a decade, despite the warm weather and Valentine’s Day.

In-store sales were down 3.7 per cent on February last year, according to BDO.

Lifestyle retailers suffered their worst February on record – a drop of 4.9 per cent on last year – with Valentine’s Day failing to provide any of the expected uplift to the category.

Even homeware sales, which saw marginal growth of 0.4 per cent, were derived from a negative base of minus 4.2 per cent last February.

Sophie Michael, head of retail and wholesale at BDO, said: ‘Consumer confidence is teetering on the precipice and shoppers are resisting unnecessary spending.

‘Lifestyle, a category that would normally see a lift thanks to Valentine’s Day, suffered the worst monthly result since 2008. It’s clear that shoppers are exercising extreme caution.

‘It has been a tough start to the year for the sector and retailers are continuing to fill headlines with poor performances.

‘Brexit uncertainty is proving to have a disproportionate impact on discretionary spending and there’s an increasing sense of nervousness among retailers.’

Premier League stars ‘are hooked on sleeping pills’ as they chase...

HAMISH MCRAE: Even if the Tory win, you’ll have to be...