Some 450 savings accounts now match or beat June’s inflation reading, but that is nearly 100 fewer than last month.

The consumer prices index surprisingly rose last month to 0.6 per cent, up 0.1 per cent on May – the first rise in inflation of 2020 – driven by rising clothing and computer game prices.

But while inflation rose, savings rates have fallen.

Last month, 645 accounts beat the slightly lower reading of 0.5 per cent, but this month it has fallen to 450, according to analyst Savings Champion.

Disappearing act: There are fewer inflation-beating accounts around after cuts to savings rates

In May, 496 accounts matched April’s CPI reading of 0.8 per cent, meaning fewer accounts now beat a lower figure of inflation after one of the worst six months for savers on record.

Tom Adams, from Savings Champion, said: ‘The lower number is a combination of the small increase in CPI and the ongoing rate cuts that seem to be a permanent feature of the savings market.’

Savings experts told This is Money last week that rates had not yet hit the bottom and savers could expect more misery.

There are just 24 ‘bread and butter’ easy-access savings deals which match or beat 0.5 per cent, down from the 59 which paid at least 0.6 per cent last month.

The average easy-access account pays just 0.23 per cent now, although savers can earn more with a top rate of 1.15 per cent.

In January, the average easy-access rate was 0.59 per cent, which would have nearly matched June’s inflation reading and beaten May’s.

The number of inflation-beating fixed-rate bonds which require savers to lock money away for less than two years has fallen from 132 last month to 89 this month. 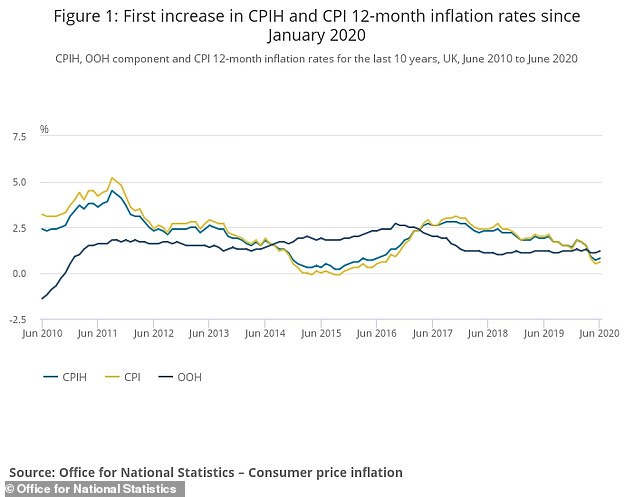 The Consumer Prices Index measure of inflation surprisingly rose to 0.6% in June, up from 0.5% in May. It is the first rise since January, but remains far below the Bank of England target

This is how many accounts of each type beat inflation, according to Savings Champion:

All average rates pay lower than 1 per cent, with even fixed-rate bonds which tie money up for longer than 18 months paying an average of just 0.8 per cent now, according to Moneyfacts.

And with no end to low savings rates in sight this year, savers are almost certain to lose money in real terms if inflation rebounds to the Bank of England’s target of 2 per cent.

Just two accounts pay that interest rate and both of them are current accounts, one of which pays that sum for just 12 months and only on balances of up to £1,500.

The ONS also revealed the number of items which could not have prices collected last month due to the ongoing coronavirus lockdown fell again to 67, down from 90 in April. This was 13.5 per cent of the CPIH basket.

Items which continued to be unavailable to consumers included, cinema popcorn, haircuts, manicures, pints and replacement watch batteries, the ONS said, while removal vans, Will fees and green fees for golf courses were added to June’s basket as the lockdown continued to ease.

It is likely the inflation basket will better reflect normal life when July’s reading is taken, after pubs, hairdressers and beauty salons were reopened this month, giving savers more of an indication of what ‘normal’ inflation looks like.

MIDAS SHARE TIPS: Even under a Labour Government you can still...

UK shares and funds to invest like Warren Buffett