The number of three and four-bedroom homes coming up for sale has dropped to a five-year low, as buyers rush to snap up properties with more space, new data shows.

‘Extreme market momentum’ has prompted the value of homes sold across the country to double to £150billion in the first 15 weeks of this year, property website Zoopla said.

Low stock: The number of three and four-bedroom homes coming up for sale has dropped to a five-year low

Across the country, property prices have jumped by 4 per cent in the year to March, against 2.1 per cent growth the previous year, the findings suggest.

But, the annual growth rate has slowed down since January, when it stood at 4.5 per cent. Wales and Yorkshire and the Humber saw prices jump the most over the period, with house price inflation at 5.9 per cent and 5.3 per cent respectively.

Cities like Manchester, Liverpool, Leeds, Nottingham and Leicester all saw prices rise over 5 per cent year-on-year, with Manchester leading the pack in the city growth stakes.

Glasgow, Bristol, Nottingham, Stoke and Middlesbrough were the top five busiest sales markets in the country in the past few months, the findings also revealed.

Low stock levels remain a key issue in many parts of the country. The total number of homes available to buy was 30 per cent lower at the start of this month than at the same point from 2017 to 2019.

While buyers flock to the market, the total number of homes listed for sale in the year to date is 19 per cent lower than last year’s average, which is striking considering the market was closed for a number of months at the height of the pandemic.

‘One in every 50 homes was sold between 1 January and 15 April, up from one in every 100 homes during the same period last year’, Zoopla said. 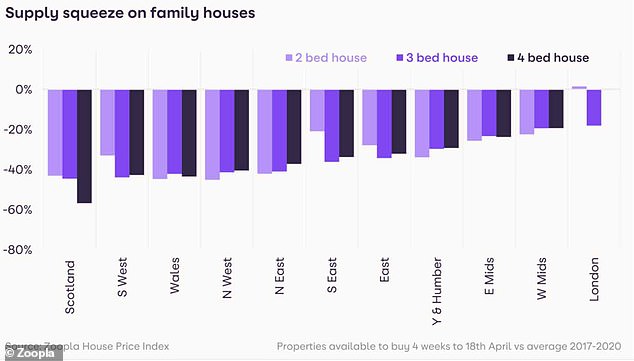 Squeeze: Supply levels of different homes up and down the country 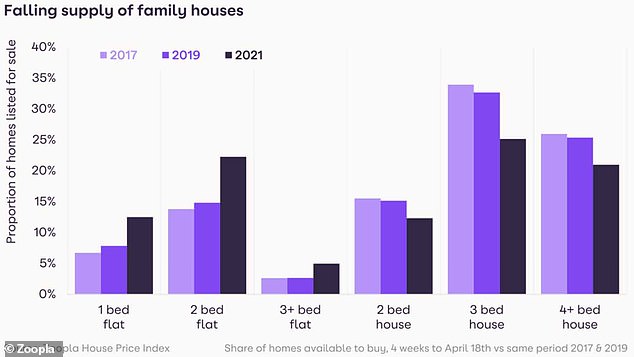 Variations: The number of four-bedroom homes coming up for sale has dropped

First-time buyers are also coming back to the market, buoyed by the Government’s 95 per cent mortgage guarantee scheme and the reintroduction of high loan-to-value mortgages – but this is exacerbating the supply and demand problem.

However, amid ‘acute market activity’ Zoopla thinks the housing sector will ‘moderate’ as the year rolls on and government financial support packages fall away.

Grainne Gilmore, head of research at Zoopla, said: ‘The imbalance between supply and demand, which is creating a very tight market for family homes, will start to ease in the near term as homeowners become increasingly comfortable opening their homes to viewings, in turn building supply of new stock.

‘The scale of buyer demand will also moderate from the peaks seen after Easter as lockdowns end across the country and there is some return to pre-pandemic “normality”.’

But, Ms Gilmore added: ‘The fundamental imbalance will remain.’

The findings suggest the lack of three and four-bedroom homes on the market will hamper sales volumes for the second half of the year.

However, the number of flats for sale is on the up, with ‘second-steppers’ looking for more space in a new home. Houses comprised 59 per cent of listings in the past year, down from 76 per cent back in 2017. 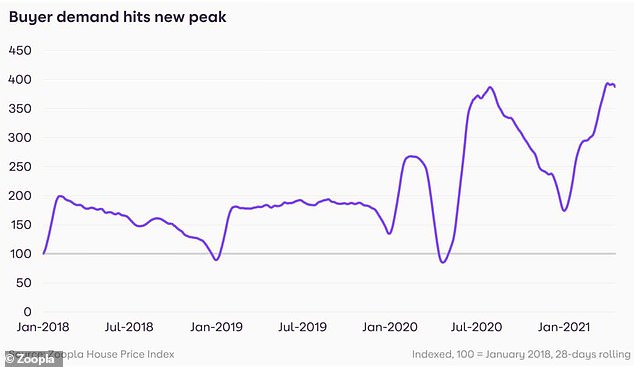 In demand: Buyer demand has been high in recent months

Zoopla said buyer demand leapt 27.5 per cent in the year to date and peak in the week after Easter. But demand among buyers has since slipped as lockdown restrictions ease.

‘This comes as households start to focus on catching up with friends and family, and taking advantage of leisure activities and amenities that haven’t been available since January’, it said.

Last week, data from Rightmove suggested average asking prices jumped 2.1 per cent in April to a new all-time high of £327,797, marking an increase of £6,733 from March.

Fresh data from the Office for National Statistics showed property prices surged £20,000 to over £250,000 on average over the past year.

House price inflation hit 8.6 per cent in the year to February, marking the highest annual growth rate since 2014, the ONS said based on its Land Registry price paid-based index. 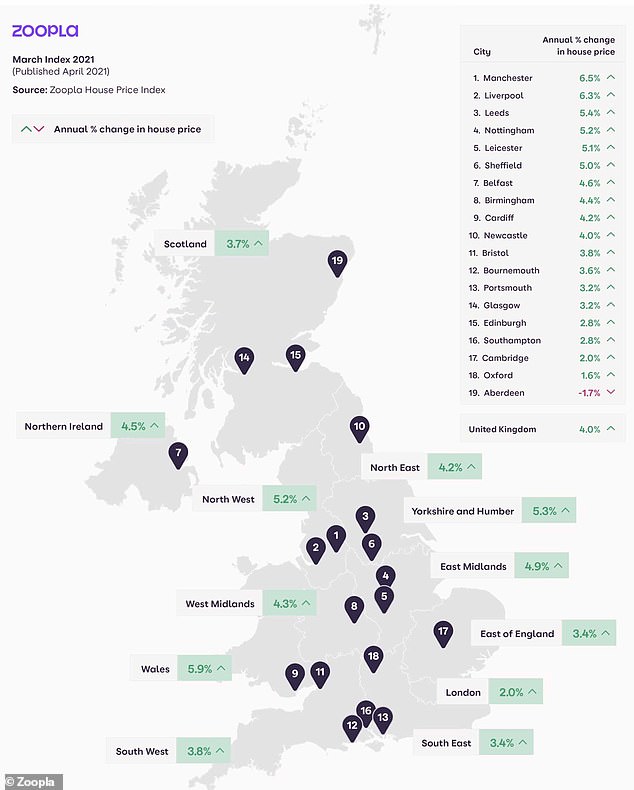 Shifts: Property price shifts in some of the UK’s best-known urban hotspots