Earth is being assaulted by space rocks more now than it ever has.

Scientists have found asteroids are striking our planet three times more often than during the time of the dinosaurs 290 million years ago.

Experts also believe the cosmic collisions are to blame for the demise of dinosaurs 66 million years ago when a particularly large meteor landed in Mexico and formed the Chicxulub crater – wiping out most life on Earth.

Astronomers created a time-lapse simulation to understand and model the rate of impact on the moon and then applied this to our own planet.

‘Our research provides evidence for a dramatic change in the rate of asteroid impacts on both Earth and the Moon that occurred around the end of the Paleozoic era,’ said lead author Dr Sara Mazrouei of the University of Toronto.

‘The implication is that since that time we have been in a period of relatively high rate of asteroid impacts that is 2.6 times higher than it was prior to 290 million years ago.’

Previous research has claimed the majority of Earth’s scars from meteor landings had been erased and smoothed over via the complex planet’s geological processes.

This, astronomers now believe, is not necessarily the full story.

This, Dr Rebecca Ghent, also of the University of Toronto, says is useful for both scientists and members of the public interested in how the impact history of the moon and Earth affected evolution and the history of life on Earth.

Using NASA’s Lunar Reconnaissance Orbiter (LRO) the international team of researchers were able to create a comprehensive map of asteroid impacts and date when they occurred.

Going back up to a billion years, almost a quarter of the lifetime of both celestial objects, experts were able to draw a timeline for the moon’s impacts.

Astronomers created a time-lapse simulation to understand and model the rate of impact on the moon and then applied this to our own planet.  They  dated meteor impacts on the surface of the moon for 1 billion years 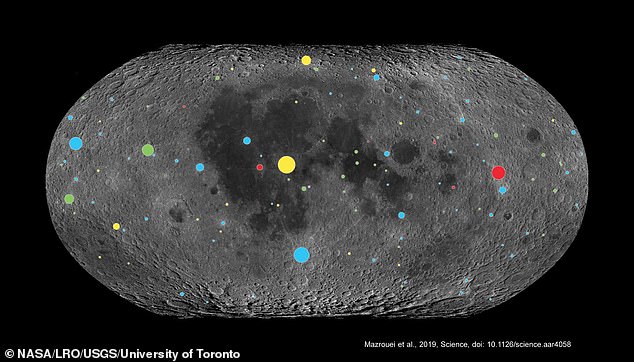 Larger rocks giving off more heat than finer, lunar soil so scientists were able to calculated the rate at which Moon rocks break down into soil, and revealed a relationship between the amount of large rocks near a crater and the crater’s age.

Younger craters tend to be covered by more boulders and rocks than older craters.

This happens because the boulders ejected by an asteroid strike get ground down over hundreds of millions of years by a constant rain of tiny meteorites.

Both Earth and the moon were found to show the same history of asteroid bombardment.

In the 1980s, archaeologists discovered a layer of iridium. 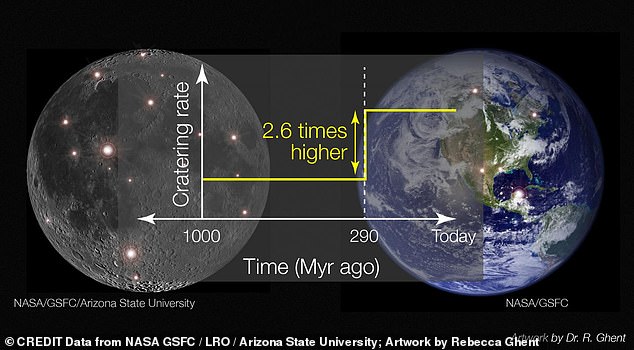 Image depicts the change in impact rate over hundreds of millions of years. modelled in this paper. Some of the craters used in the study on both the moon and Earth are highlighted 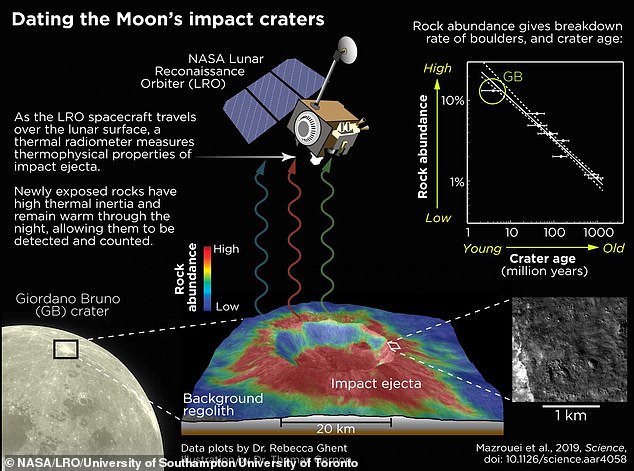 Dating the moon’s impact craters was done by looking for the larger rocks giving off more heat than finer, lunar soil. Scientists were able to calculate the rate at which Moon rocks break down into soil, and revealed a relationship between the amount of large rocks near a crater and the crater’s age. Younger craters tend to be covered by more boulders and rocks than older craters

While the reason for a jump in the impact rate was unknown, researchers speculate it might be related to large collisions taking place more than 300 million years ago in the main asteroid belt between the orbits of Mars and Jupiter.

This would have create debris that could reach the inner solar system.

And the findings challenge our previous understanding of Earth’s history which is punctuated by major extinction events and rapid evolution of new species.

Asteroid impacts would have played a major role in mass extinctions, the study published in the journal Science suggested.

Study co-author Dr Thomas Gernon, an Associate Professor in Earth Science at the University of Southampton, said: ‘It’s perhaps fair to say it was a date with destiny for the dinosaurs – their downfall was somewhat inevitable given the surge of large space rocks colliding with Earth.’

WHAT ARE THE THEORIES ON THE ORIGIN OF THE MOON?

Many researchers believe the moon formed after Earth was hit by a planet the size of Mars billions of years ago.

This is called the giant impact hypothesis.

The theory suggests the moon is made up of debris left over following a collision between our planet and a body around 4.5 billion years ago.

The colliding body is sometimes called Theia, after the mythical Greek Titan who was the mother of Selene, the goddess of the moon.

Many researchers believe the moon formed after Earth was hit by a planet the size of Mars billions of years ago. This is called the giant impact hypothesis

But one mystery has persisted, revealed by rocks the Apollo astronauts brought back from the moon: Why are the moon and Earth so similar in their composition?

Several different theories have emerged over the years to explain the similar fingerprints of Earth and the moon.

Perhaps the impact created a huge cloud of debris that mixed thoroughly with the Earth and then later condensed to form the moon.

Or Theia could have, coincidentally, been chemically similar to young Earth.

A third possibility is that the moon formed from Earthen materials, rather than from Theia, although this would have been a very unusual type of impact.

Anglo-Saxon pendant dating back 1,500 years is discovered by an amateur...

Footballers of the future will look more like Ronaldo than Rooney...