A nine-month-old boy died because of brain damage suffered when he was born in the breech position.

Henry Payne-Smith died in May 2018 after living for months with cerebral palsy triggered by his traumatic birth.

His mother Sophie, 22, has since heard in an inquest that the hospital where Henry was born wasn’t equipped to deal with breech births.

She is now warning other parents-to-be about the dangers of their babies being wrongly position and telling them to ‘push doctors’ for the right care.

Henry Payne-Smith, born in Clacton-on-Sea in Essex, died when he was just nine months old because of brain damage which had been caused when he was born in the breech position

‘The nine months I had with him were the happiest of my life despite all the hurdles and challenges Henry faced,’ said Miss Payne, from Hythe, Kent.

Around three per cent of babies are in the breech position – when they are in position to be born bottom-first – but it is not necessarily dangerous.

However, Henry’s labour took so long he was left with severe brain damage.

His head didn’t leave his mother’s womb until more than 20 minutes after his rear end did.

Midwives at Clacton Maternity Unit – Miss Payne was living in Clacton-on-Sea, Essex, at the time – hadn’t realised Henry was in the breech position until five minutes after Miss Payne’s waters broke, an inquest heard.

A coroner at Chelmsford Coroner’s Court heard the unit was not equipped to cope with breech births and ultrasound scans had been kept separate from Miss Payne’s medical records.

Henry’s bottom came out first at 5.12am and the rest of his body was not delivered until 5.35am, the court was told.

An ambulance was called to transfer him to Colchester General Hospital, which was nearly 40 minutes away from the midwifery led unit.

He needed to be resuscitated after he was born and, in the 23 minutes between his bottom and head being birthed, his brain was starved of oxygen.

Henry would spend three weeks in hospital before his mother was allowed to take him home in August 2017.

As a result of the traumatic birth, Henry was left with cerebral palsy – a condition which causes muscle weakness, learning disabilities, and problems with vision and swallowing.

After living longer than doctors had expected, he died as a result of brain damage last year.

Miss Payne said: ‘I would not wish the pain I continue to live with over Henry’s death on anyone.

‘The first time I got to see Henry properly was in hospital when all I could see at the end of the bed were wires.

‘I just broke down in tears. I didn’t want to see him like that. 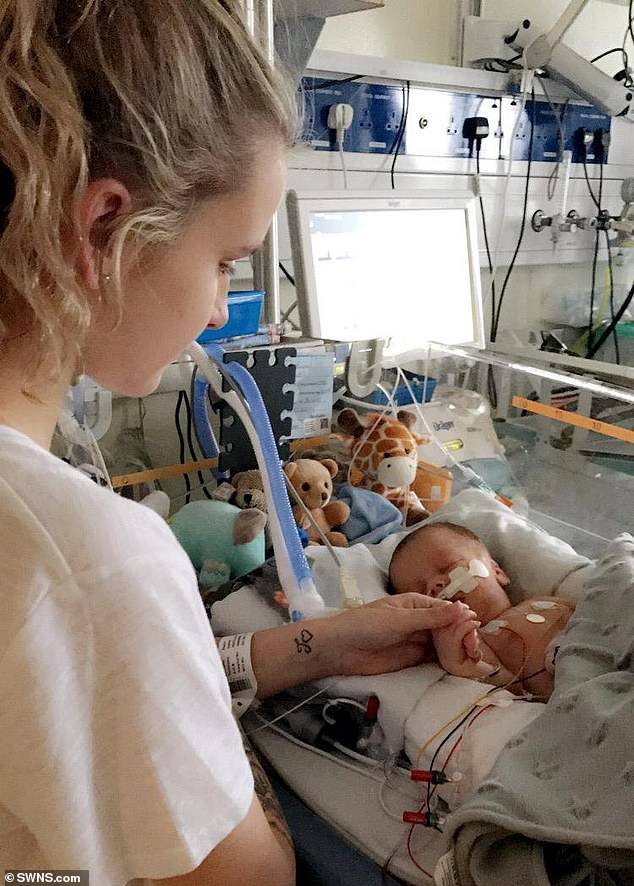 Sophie Payne, 22, said the nine months she had with her son were the ‘happiest of my life’ despite his devastating health problems. A coroner heard the maternity unit where he was born was not equipped to deal with breech births and midwives were not all aware

‘The doctors thought he would not survive and that we should say our goodbyes but Henry managed to defy the doctors.

‘He was such an adorable and brave little boy who was a real fighter to the end.’

Miss Payne is now speaking out to warn parents about the dangers of breech births.

She added: ‘While I know nothing will bring him back I was determined to get answers for my little boy so hopefully other families do not have to experience the pain that I have.

‘By speaking out I just hope that parents are fully aware of the potential dangers of their baby being in the breech position and, if they feel it is needed, ask questions and push doctors for answers so they can decide what is best for them.’

‘The coroner heard evidence from the midwives involved and also from an independent medical expert, consultant obstetrician and gynaecologist Dr Malcolm Griffiths, who said that the circumstances were tragic but unavoidable.

‘As with any tragic event where a life is lost we will review the coroner’s findings in detail and always strive to improve the quality of the care we provide to our patients and their families.’

Microsoft’s Brand Chief on Working With the NFL During Covid

AirPods Pro Are Even Better One Year Later

Why traders are not worried that the KuCoin hack will drop...

The rotten state of our children’s teeth