Preparations for Sunday’s Super Bowl meeting between the New England Patriots and the Los Angeles Rams were ramped up on Tuesday at the stunning venue in Atlanta.

The state-of-the-art Mercedes Benz Stadium will host the eagerly-anticipated meeting and the finishing touches both on the pitch and behind the scenes were finalised.

Caterers worked tirelessly preparing french fries and burgers while other members of staff were tasked with ensuring all of the appropriate signage is in place as the NFL gear up for the end of season spectacle. 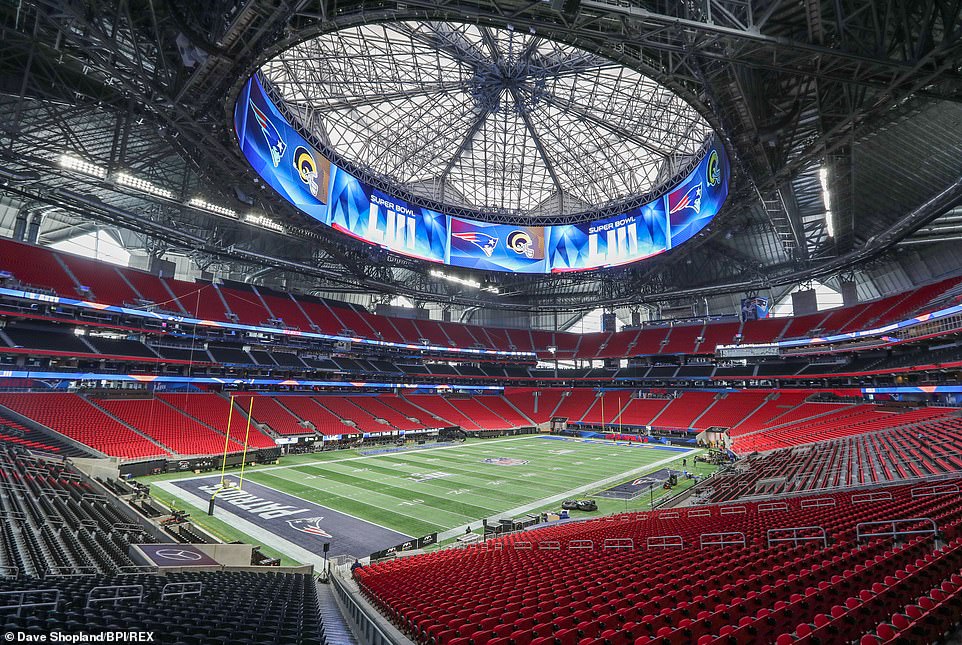 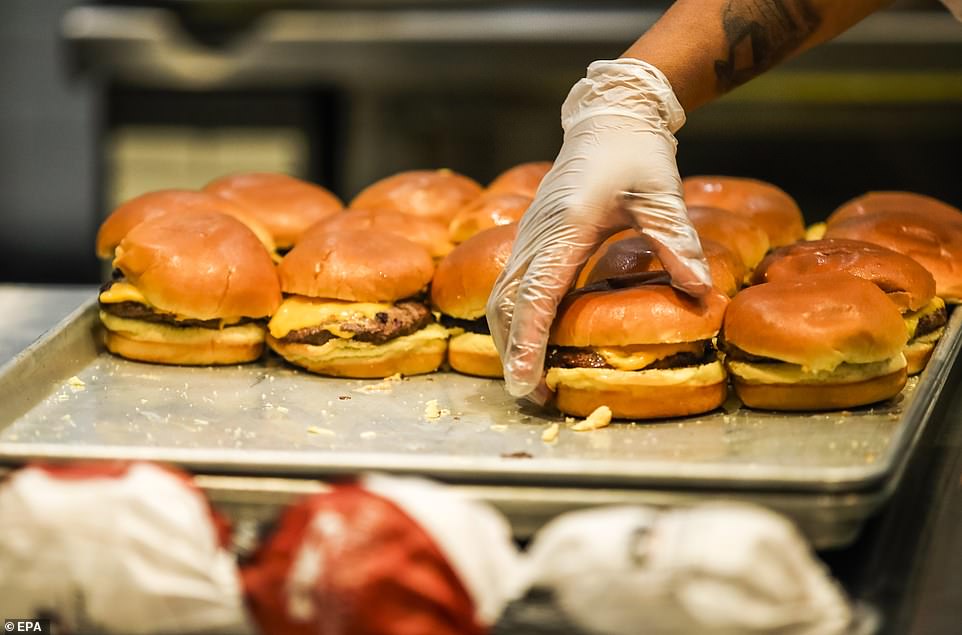 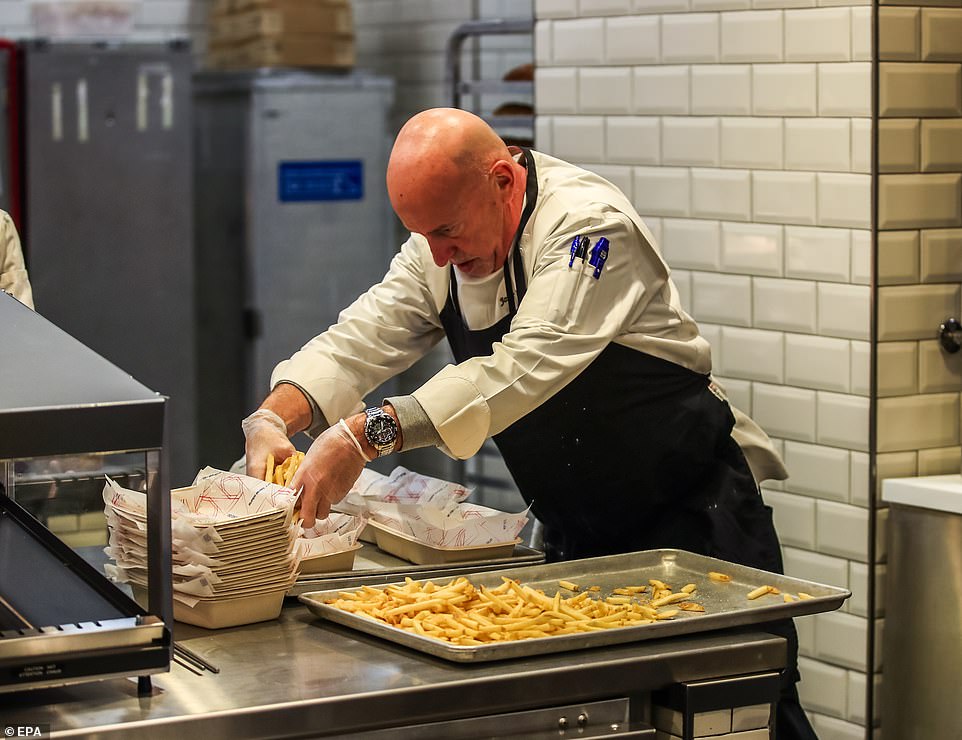 LA Rams running-back Todd Gurley is trying to keep a lid on his excitement for the contest as he revealed he often communicated with two other former Georgia running backs, Sony Michel and Nick Chubb, during the 2018 season.

Now that Gurley and Michel are having a Super Bowl reunion as the leading rushers for the Rams and New England Patriots, respectively, that conversation is on hold. Gurley says he’s trying to avoid talking with Michel, his 2014 Georgia teammate, this week. At least not directly.

‘I remember when he first came in, he couldn’t run and catch,’ Gurley said of Michel’s freshman season at Georgia. ‘I had to teach him how to do all that stuff.’ Gurley taught Michel? ‘Yeah, I did,’ he said. ‘Hopefully everything I taught him, he doesn’t do it and he just plays like he used to play before I taught him everything.’ 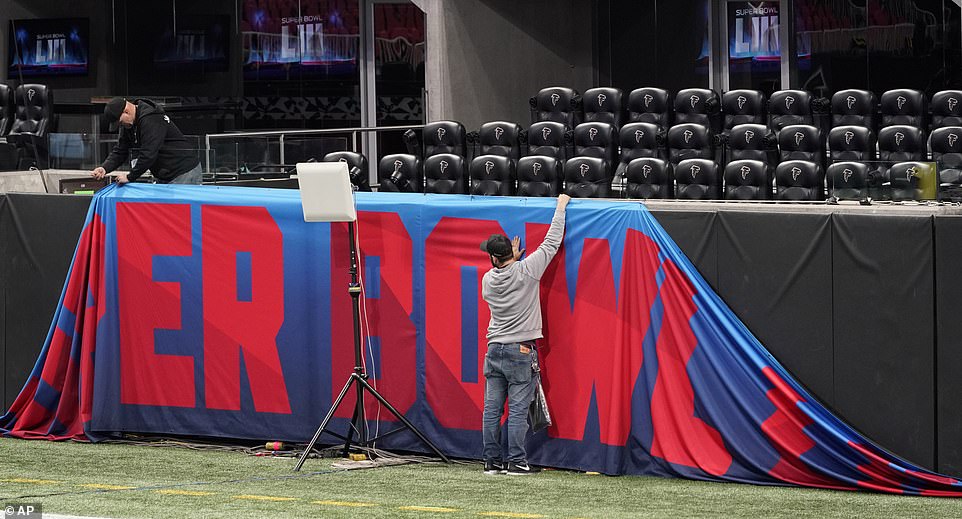 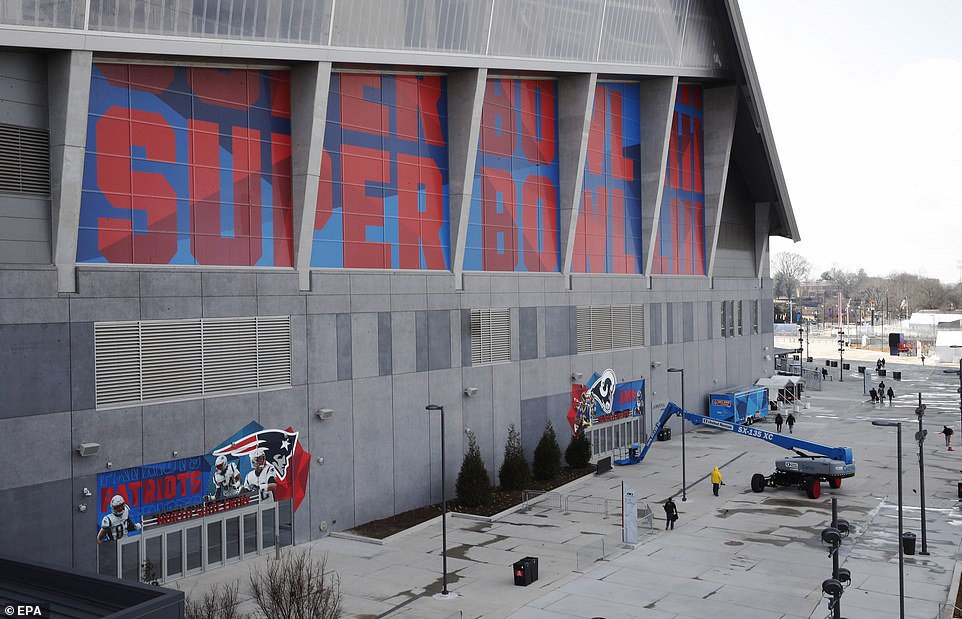 Outside the state-of-the-art facility, the NFL ensured everyone in town knew what is round the corner with big letters put up 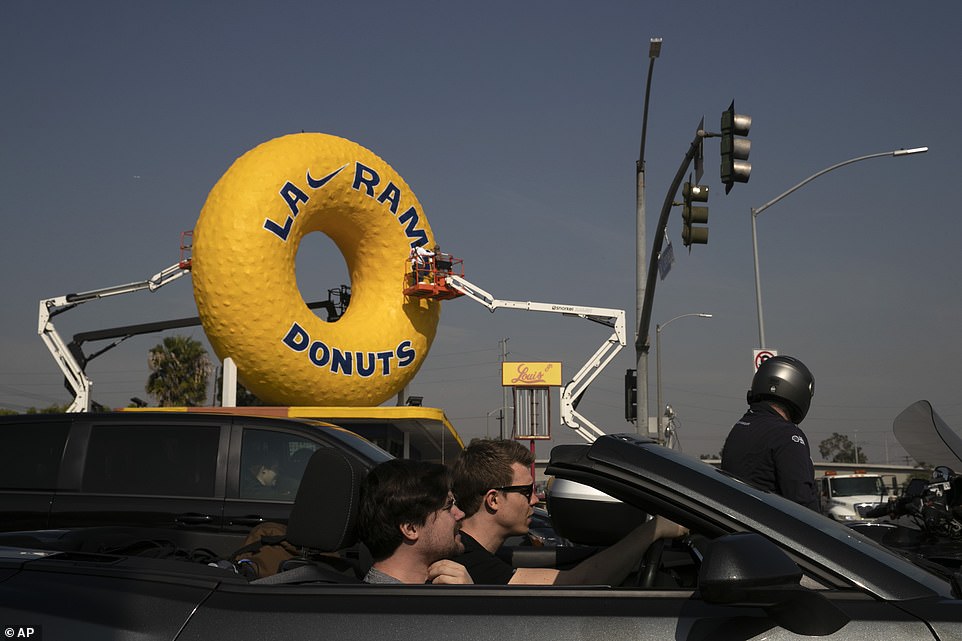 Michel on Monday described Gurley as a ‘big brother’ at Georgia and said ‘it’s pretty cool’ the two will share the spotlight on Sunday.

‘It’s just more amazing that it’s the Super Bowl,’ Michel said. ‘We played on the same team, and I’ve seen him grow throughout the years. He worked for everything he got, and I’m excited for him.’

Michel and Cleveland’s Nick Chubb had productive rookie seasons to join Gurley in the league and strengthen Georgia’s bragging rights to be the nation’s ‘RBU’ – the top school for running backs.

It’s been a much-repeated claim since Herschel Walker won the Heisman Trophy for the Bulldogs in 1982 and was followed by such backs as Garrison Hearst, Rodney Hampton, Robert Edwards and Knowshon Moreno.

Gurley said Georgia has been RBU ‘since I left.’ Chubb, Michel, Elijah Holyfield and D’Andre Swift have had 1,000-yard seasons. Holyfield, the son of former boxing champion Evander Holyfield, is entering this year’s NFL draft as a junior. 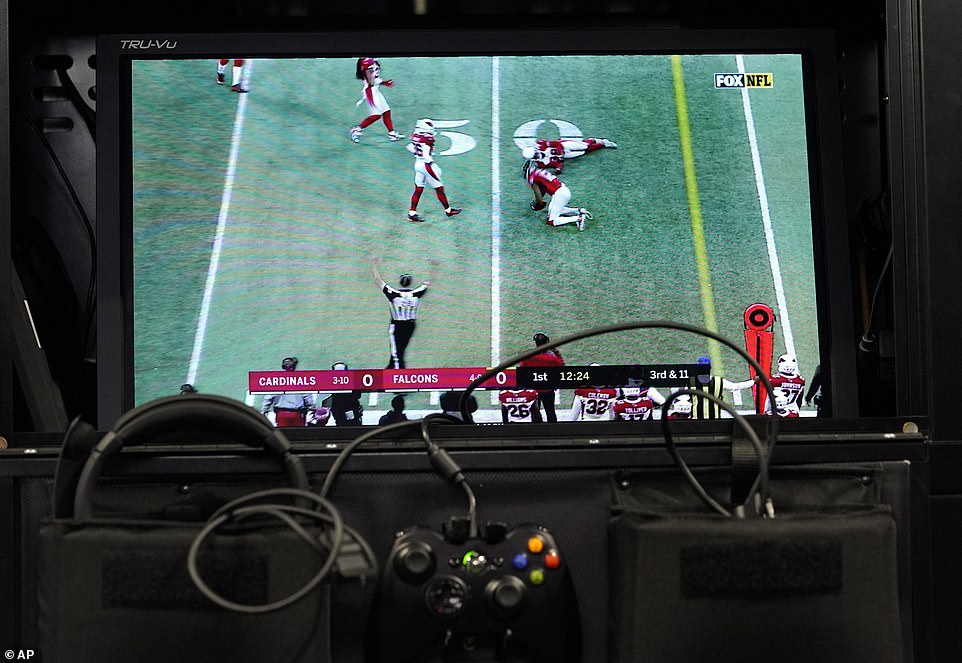 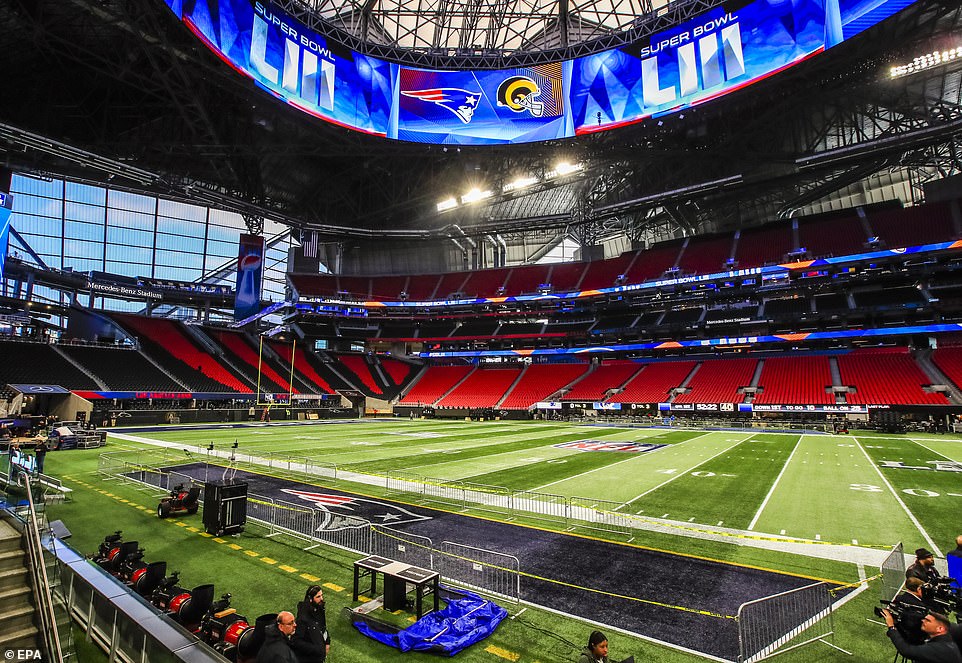 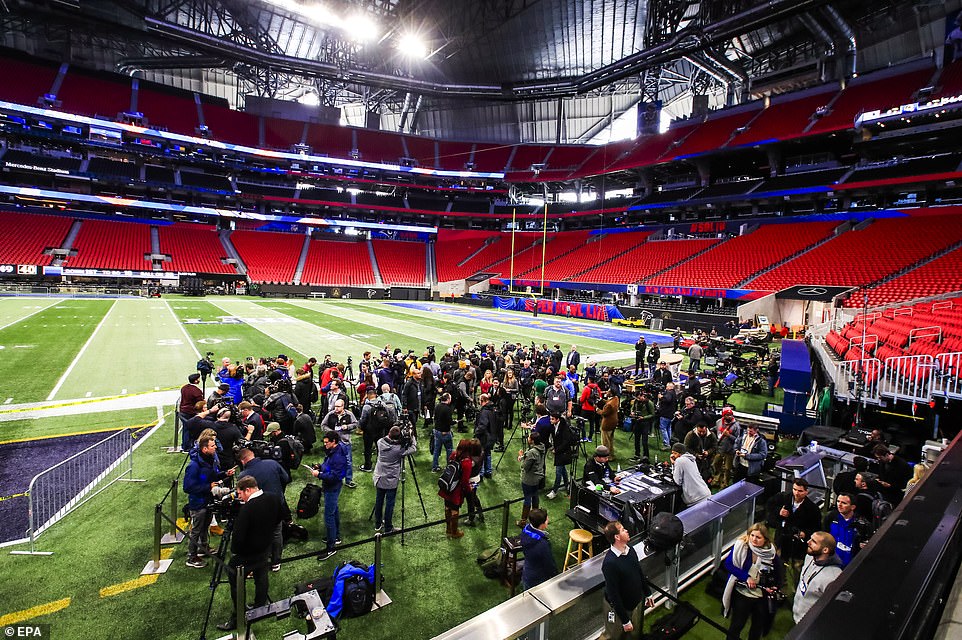 Asked what makes Georgia different than other schools with more than one NFL running back, Gurley said ‘because we’re playing in the Super Bowl and nobody else is.’

Each running back has help. The Rams boast a one-two punch with Gurley and C.J. Anderson. Patriots quarterback Tom Brady also can give the ball to James White and Rex Burkhead.

‘Any publicity Georgia gets, I appreciate and I like,’ Andrews said.

Gurley was one of the NFL’s most productive players this season. He led the league with 21 total touchdowns and ranked third with 1,251 yards rushing. He also had 59 catches as he flourished as a runner and receiver for the second straight year in coach Sean McVay’s offense .

Chubb ranked 10th with 996 yards and Michel was 15th with 931 yards in the regular season. Another former Georgia player, Isaiah Crowell, led the Jets in rushing following four seasons with Cleveland. 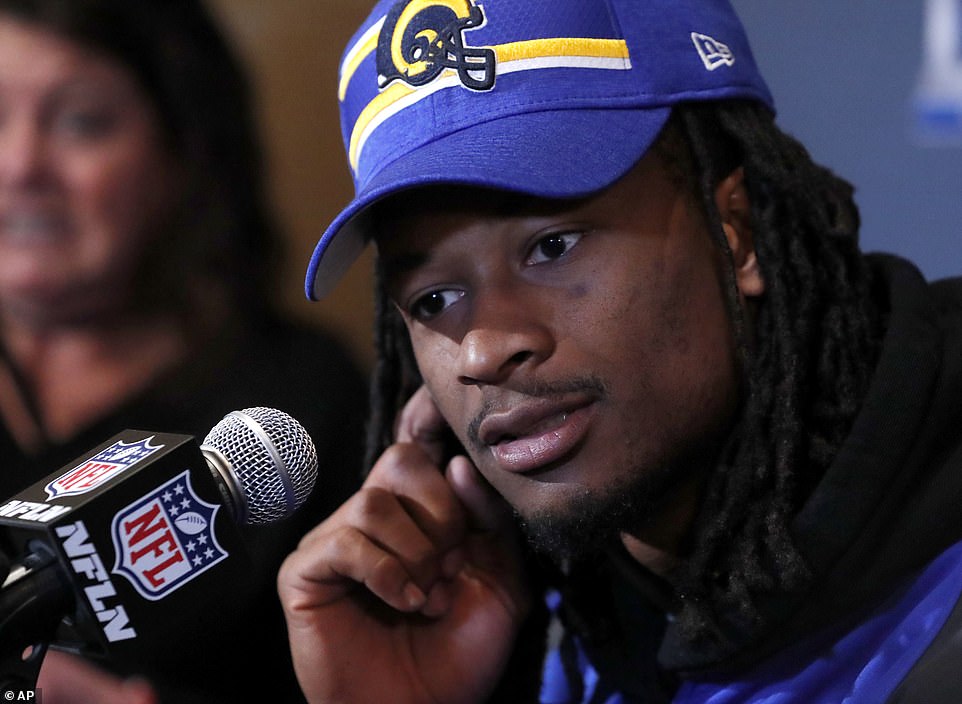 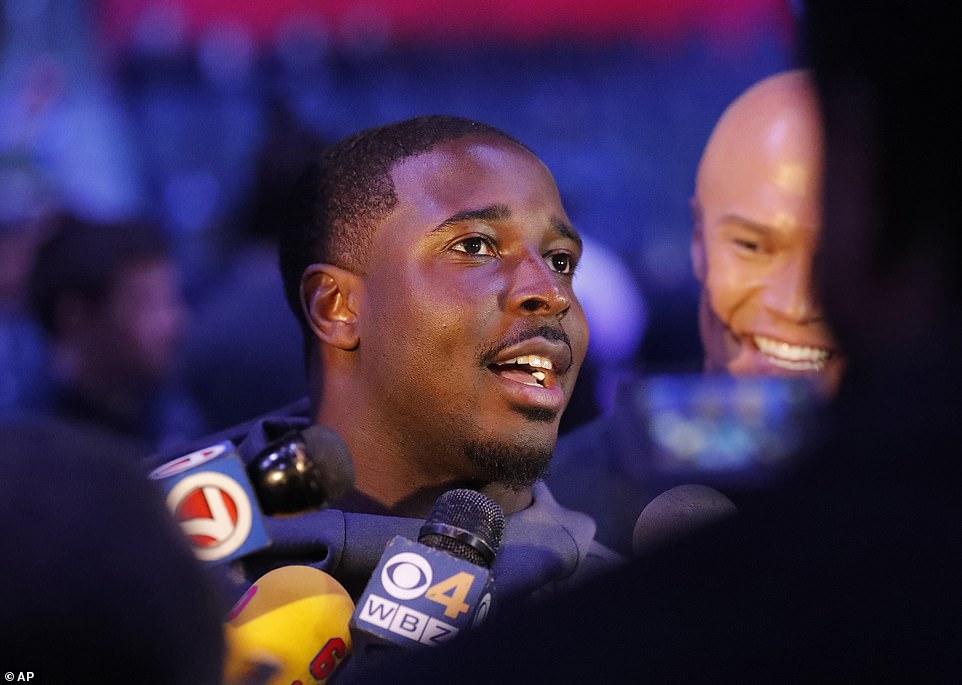 Michel is the league’s top post-season rusher with 242 yards rushing and five touchdowns. That includes 129 yards and three touchdowns in a win over the Chargers.

Gurley had only four carries for 10 yards in the Rams’ NFC championship game win over New Orleans. Even though he ran for 115 yards in the Rams’ playoff win over Dallas, the quiet showing against the Saints made many observers wonder if Gurley was still bothered by a knee injury that caused him to miss the final two games of the regular season.

He insisted his health is not an issue. ‘I feel good,’ Gurley said Tuesday. McVay predicted Gurley ‘is going to be a big part’ of the Super Bowl game plan.

‘I think a large part of specifically when you talk about last week’s game was the play selection,’ McVay said Tuesday.

‘I’ve got to do a much better job for Todd to get him opportunities to get going.’