This week, the Springfield School District in New Jersey announced a new program that uses virtual reality to show students what it’s like to be bullied or excluded by their classmates.

Designed as a series of 360-degree videos for VR headsets, the scenes recreate the experiences of several Springfield students who had problems with their classmates.

One video puts users in the point of view of Morghan Blair, a high school freshman who has been repeatedly attacked with racist slurs by her classmates, including the N-word.

‘I had to show people how it feels to be in my shoes if they had to for one day,’ Morghan told CBS News.

She said the N-word in particular is ‘the one word that I don’t like that always comes up in every conversation.’

She described the slur as ‘a birthmark,’ a word that’s much easier to say than it is to hear.

Another video shows the point of view of a student receiving a slew of texts from her classmates accusing her of being a ‘slut’ for having posted a picture with some male classmates.

It was based on the experiences of Erica Carrie, who graduated from Jonathan Dayton High School in June.

Carrie said she was bullied throughout her time at Dayton because she had more male friends than female friends.

The program was put in place by Springfield school superintendent Michael Davino in partnership with Kinful, a company that develops ‘social-emotional learning’ programs aimed at young people using virtual reality.

‘We needed a way to convey to those people, if you knew what this felt like, you might not do it,’ Davino said. 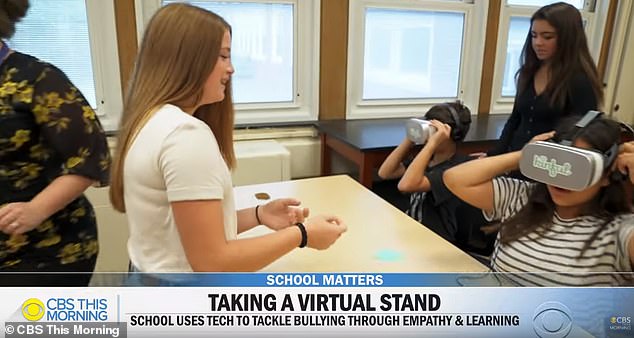 Davino has been a longtime advocate of using technology in the classroom.

He started a one-to-one laptop program in Springfield schools, through which students get their own MacBook starting in the sixth grade. 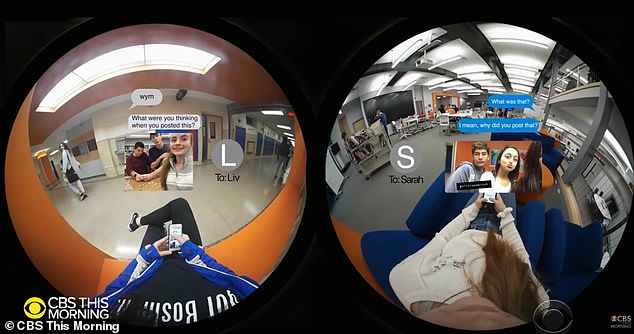 Davino hopes the program will open up students ‘to the serious and long range impact of being mean-spirited just to satisfy yourself, and that in the end your satisfaction is fleeting and those people are suffering.’

While Carrie admitted her experiences had been painful, she pointed out that many students who participate in bullying behavior might also be suffering or have been bullied themselves. 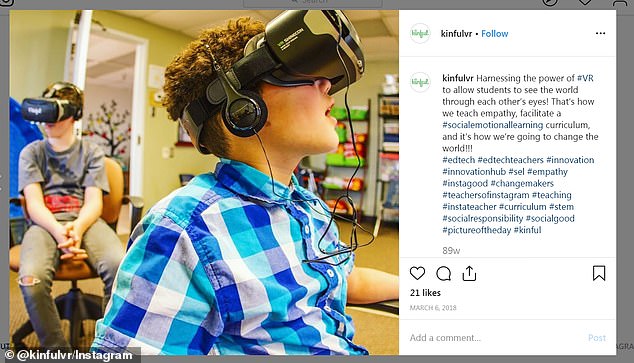 According to the CBS report, nearly 50 percent of American students between fourth and twelfth grade have been bullied at least once in the last year, but 31 percent have also bullied someone else.

‘I want them to take away that we have to think about how the bully is feeling and that they do have an insecurity and that we should be nicer to them as well,’ Carrie said.

‘We kind of glaze over that when we talk about bullying.’