By Reuters and Cheyenne Macdonald For Dailymail.com

The world’s largest streaming service reported revenue of $4.19 billion for the quarter that ended in December, slightly below the $4.21 billion that Wall Street analysts had forecast, according to IBES data from Refinitiv.

It comes just days after Netflix announced it would be raising fees for US subscribers.

The company reported earnings of 30 cents per share for the quarter, lower than a year earlier due to higher spending, but above Wall Street analysts’ average estimate of 24 cents, according to Refinitiv.

Investors have come to expect fast-growing Netflix to handily beat forecasts. Without a blowout quarter, shares fell 3 percent in after-hours trading to $342.59.

‘But results won’t push its stock higher from here, with most of the good news already priced in after a massive rally earlier this month.’

It was not clear if analysts’ targets in the Wall Street consensus of 9.2 million also excluded free trial memberships. 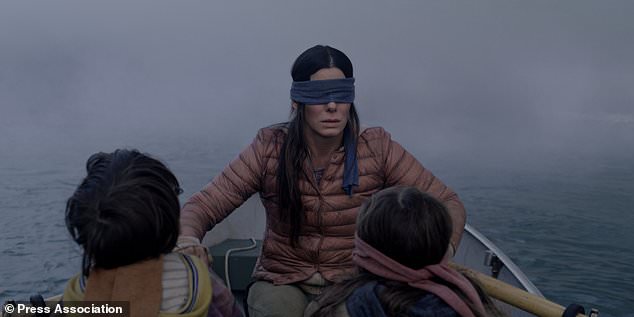 Earlier this week, Netflix announced it was raising prices for U.S. customers by $1 to $2 per month to help fund its aggressive expansion and offset mounting debt.

‘Bird Box’ became a cultural sensation after its Dec. 21 release on Netflix.

The company estimated that 80 million households will have watched the movie starring Sandra Bullock in its first four weeks, sparking a viral reaction online.

WHY DID NETFLIX PREVIOUSLY HIKES IT PRICES?

In October 2017, Netflix shocked users when it sent an email informing them of a price increase that raised users’ monthly cost as much as 10 per cent.

Netflix began charging £7.99 ($11 in the US) per month instead of £7.49 ($10 in the US) for a plan that includes HD and allows people to simultaneously watch programs on two different devices.

A plan that limits subscribers to one screen at a time without high-definition remained at £5.99 ($8 in the US) a month.

The buzz came during the Christmas holiday season, when sales of phones and internet-connected TVs typically lift Netflix subscriptions.

Netflix added an unprecedented 781 hours of U.S. original programming in the United States during the quarter, according to Cowen &Co analysts, including drama series ‘Narcos: Mexico’ and holiday films such as ‘The Christmas Chronicles.’

The blitz of original content comes as Walt Disney Co has stopped supplying new movies to Netflix in order to stock its own streaming service planned for later this year.

AT&T Inc and Comcast Corp also have digital offerings in the works.

Show and Go Training by Eric Cressey | Show and Go...

Microplastics are raining from the sky onto the Rocky Mountains, new...