The US space agency snapped the image of 500metre-wide Bennu using its spacecraft OSIRIS-Rex during its orbit of the space rock.

The 1,600ft rock – situated between Earth and Mars – weighs 87 million tonnes and is currently orbiting the sun.

In the snap, Bennu can be seen looming on the right, while Earth and the moon are glowing in the bottom-left corner.

OSIRIS-Rex started orbiting Bennu late last year and is set to land on it in a sample-collecting mission in 2020.

IMAGE: OSIRIS-Rex captured this of Bennu (right) and Earth and the moon (left) (Pic: NASA) 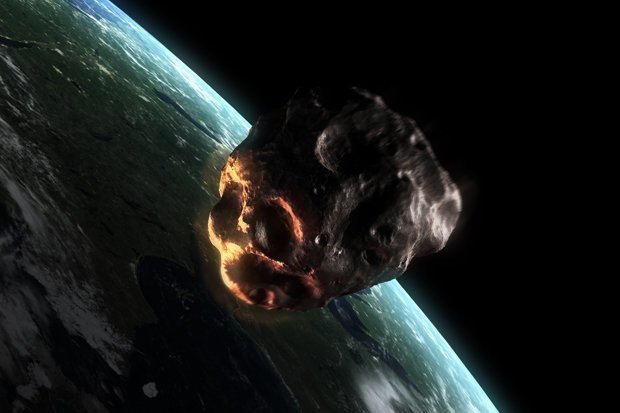 SAMPLES: OSIRIS-Rex is set to land on Bennu next year to collect samples (Pic: NASA)

NASA has said there is a slim chance the asteroid could make impact with Earth on September 25, 2135.

If it did, it is estimated that the energy unleashed during impact would be equivalent to 1,200 megatons – 80,000 times that released by the Hiroshima bomb.

Scientists hope Bennu will help them learn more about where humans come from and where we are going.

This is because scientists believe asteroids carried the chemicals to Earth that led to the beginning of living organisms.

NASA recently announced plans to smash a spaceship into an asteroid to change its course in a bid to prevent a space rock smashing into Earth in the future.

But planetary defence experts have raised concerns this may not work.

PLAN: NASA hopes it can smash a spacecraft into an asteroid to change its course (Pic: GETTY)

Kirsten Howley, a physicist at Lawrence Livermore National Laboratory, who has worked alongside NASA said: “This study aims to help us shorten the response timeline when we do see a clear and present danger so we can have more options to deflect it. The ultimate goal is to be ready to protect life on Earth.

“The push you need to give it is very small if you deflect the asteroid 50 years out.

“The probability of a Bennu impact may be 1 in 2,700 today, but that will almost certainly change – for better or worse – as we gather more data about its orbit.

“Delay is the greatest enemy of any asteroid deflection mission.”