American astronauts Neil Armstrong, Buzz Aldrin and Michael Collins were part of the Apollo 11 crew that set foot on the Moon’s surface in 1969.

The remarkable mission generated a raft of conspiracy theories, with many claiming the landings were a hoax.

One so-called “researcher” believes that NASA fooled its own workers by hijacking a TV satellite and broadcasting fake footage – despite having no proof.

The theorist, who goes by username Discern The Evidence, argues in a YouTube video: “All that was needed was a small group of NASA top managers who decided to fake the moon landings, while everyone else at the agency would have believed that the mission was real. 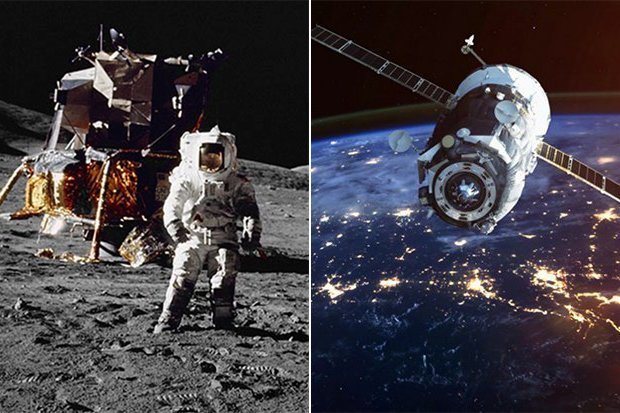 “For the hoax to succeed, for example, it would have been sufficient to take control of the TV signal the was received by the stations on Earth.

“Officially, the images from the first moonwalk were transmitted directly from the moon and were broadcasted in real time by the TV stations all over the world.

“But if the same moonwalk had been pre-recorded in a studio instead – and was then rebroadcast to the receiving stations by a satellite – the first people to be duped would have been the technicians at NASA.”

“And with them, the entire world would have been deceived.”

He also believes that NASA could have hidden the secret from its employees – despite 400,000 people working on the moon landing project.

‘DECEIVED’: One theorist believes that NASA duped its own workers (Pic: GETTY)

The truther adds: “Nowhere does it say that all 400,000 employees had to be informed of the scam being perpetrated.

“In fact, the lunar landing project had been split among thousands of different countries that worked all over the US – totally independent from one another.”

This Saturday will mark the 50th anniversary of the Apollo 11 1969 moon landing mission.

Other conspiracy theorists claim the the astronauts involved were “bumped off” to hide top-secret information on the NASA programmes – despite having no proof.

MOMENTOUS: One of Neil Armstrong’s footprints on the lunar surface (Pic: GETTY)

One incident often drawn on is the deaths of astronauts Virgil Grissom, Ed White, and Roger Chaffee in 1967.

They were killed in a devastating fire on the Apollo launchpad during a simulation.

The Command Module Interior caught fire and each of them was asphyxiated – with the fire’s source never determined.

However, there was no indication of foul play.

Financial services feel the squeeze due to pandemic and Brexit

Black Friday Was a Bust for Many Stores, Better for Online

Can the British video games industry maintain its good run?