A baffling video showing the moment a suspected state-of-the-art spy plane “exploded” over Area 51 has been labelled the best ever evidence that the US government is testing alien technology.

Today marks the date of the “Storm Area 51” viral phenomenon, which has seen millions of people sign up to the FB event to raid the secretive base in Nevada.

But while it is highly unlikely anyone will get close to the base today – the military has even warned they will shoot whoever tries – there has been increased speculation over what is inside the facility.

Conspiracy theorists have long claimed it could house alien technology and even extraterrestrial lifeforms.

And one of the leading figures in the conspiracy game has now claimed his images of a mysterious craft over Area 51 could be some of the best ever in proving the US government is testing never-before-seen technology at the base.

Back in 2016, he posted a video which contained photos of a strange triangle-shaped craft in the skies. 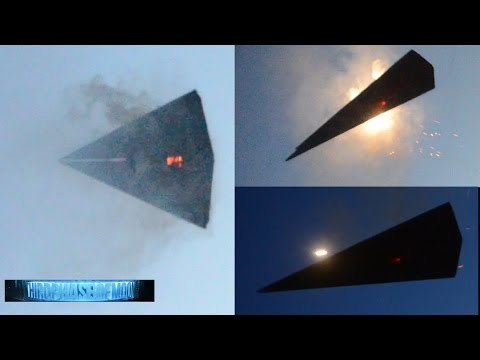 The object appeared to be on fire and even had smoke emanating from it, leading Blake to claim it had exploded.

It was quickly likened to the TR-3B spy plane, the name given to a craft believed by the conspiracy world to have been created in secret with state-of-the-art technology by the United States Air Force.

In an exclusive chat with Daily Star Online, Blake said the photos could be the most “compelling evidence ever” of the TR-3B.

“If this is indeed in the region of Area 51, and a malfunction like this happens, maybe we still have a lot to learn about the alien tech involved?

“If you ask me, this is the most compelling evidence that Area 51 is the place for TR-3B Testing of reversed-engineered technology.”

Blake added that “there have been reports for years of malfunctions of experiments” at the base, but his photos could be the first that prove “alien technology” has gone wrong”.

Speaking on the “Storm Area 51” event, the conspiracy theorist said: “What I can say with the evidence that has been submitted to thirdphaseofmoon over the years is that something is being kept secret from the public and there is extraterrestrial technology within the base.

“Will it be shared to the public after September 20? I highly doubt it.

“But if it does thirdphaseofmoon will be the first to share the incredible event as it unfolds the day in real time.

“Let’s just hope nobody gets hurt or dare I say arrested or never seen again.”

Blake added his site “does not condone” any kind of raid on Area 51 due to it being a military base.

Mystery alien creature with ‘human-looking arms’ freaks out the internet

Mystery as cigar-shaped object spotted flying over mountains in Tennessee