The US has been plagued with mysterious sleep-shattering booms for months.

One theory was space junk falling from the skies.

While others suggested it was down to a secret underground project.

But footage has now emerged on YouTube channel secureteam10 which shows another phenomenon that occurred very close to the latest incident.

The US has been plagued with mysterious sleep-shattering booms for months.

One theory was space junk falling from the skies.

It is filmed near Brookfield, Ohio, where mystery booms had been heard.

Tyler Glockner – host of the channel – says: “Apparently they had been seeing some strange cloud formations in the sky.

“They appeared just before and after these booms.”

A large line of cloud can be seen in the clip, which stretches along the sky.

But it is bending around a circular object. 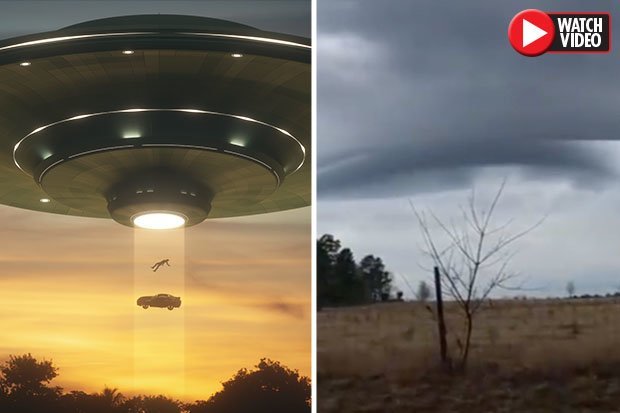 Tyler then makes a terrifying observation about the formation.

“This looks downright creepy,” he says.

“It’s as if something in the sky or from the ground is manipulating the cloud cover above.

“It kind of looks like the eye of [Horus], the Egyptian god.”

This ancient Egyptian icon has been said to represent solar and lunar symbols.

And some viewers agreed that something appeared to be watching in the sky.

“It looks like a huge eye straight into the cameraman’s heart,” one said.

And another commented: “Looks like a giant eye, Illuminati confirmed.”

But others thought it was a sign of alien life.

“Sonic booms for a cloaked craft taking off,” a third said.

EYE OF HORUS: Some believed a giant eye had formed in the sky (Pic: YouTube – secureteam10)

And a fourth added: “UFOs breaking the sound barrier.”

While a fifth suggested a direct link.

“The booms are an energy wave weapon in the sky for motherships,” they added.

The host showed that several incidents have occurred across the country.

Though local news channels suggested the booms were caused by injection wells, residents denied it.

This comes as an incident was recorded in Denmark.

Debenhams rescue is hanging by a thread