A mother-of-two found was diagnosed with cancer after spotting a lump on her breast whilst breastfeeding her son.

Amy Palmer, 30, from Paignton, Devon, went straight to her GP after finding the lump five months after the birth of her son, Lenny, now 11 months.

Doctors said it was likely to be a blocked milk duct, but sadly this was not the case, and Mrs Palmer was told she had cancer in March this year.

It was a shock to the whole family, including husband, Colin, 35, as Mrs Palmer had been feeling healthier than ever and had recently completed a half marathon.

Mrs Palmer said she has ‘mum guilt’ for missing out on her sons’ childhoods, and was devastated she had to stop breastfeeding.

She is urging for the minimum age of mammogram screening, free on the NHS, to be lowered from 50 to 18 years of age.

Most breast cancers occur in women over 50 and it is extremely rare in women under 40, according to Cancer Research UK.

Amy Palmer, 30, a mother-of-two, Frankie (left) and Lenny (right), found a lump on her breast while breastfeeding Lenny. She was diagnosed with breast cancer. Pictured recently 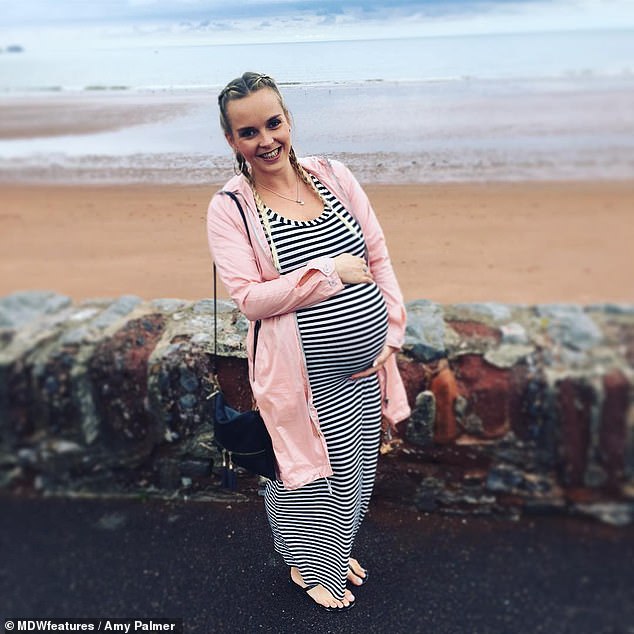 Mrs Palmer was diagnosed with breast cancer five months after giving birth in March this year. Pictured during pregnancy in September 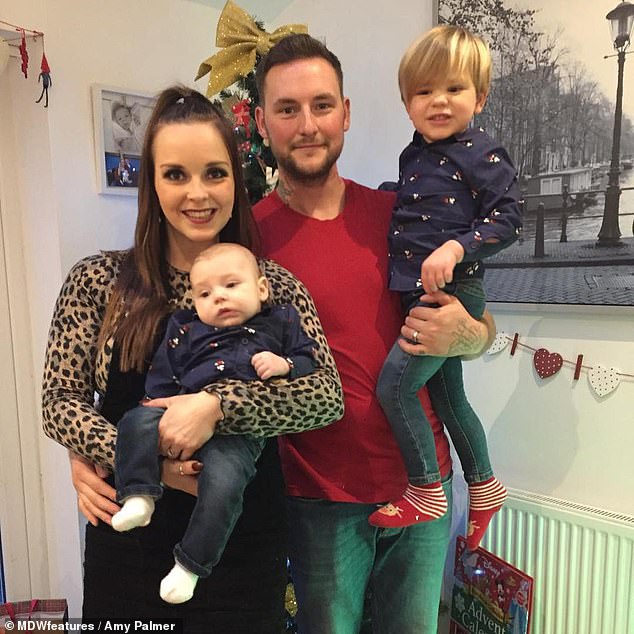 Mrs Palmer had been feeling healthier than ever after completing a half marathon less than five months after giving birth to Lenny (who she is holding). The family, including husband Colin, 35, and Frankie, three, are pictured at Christmas 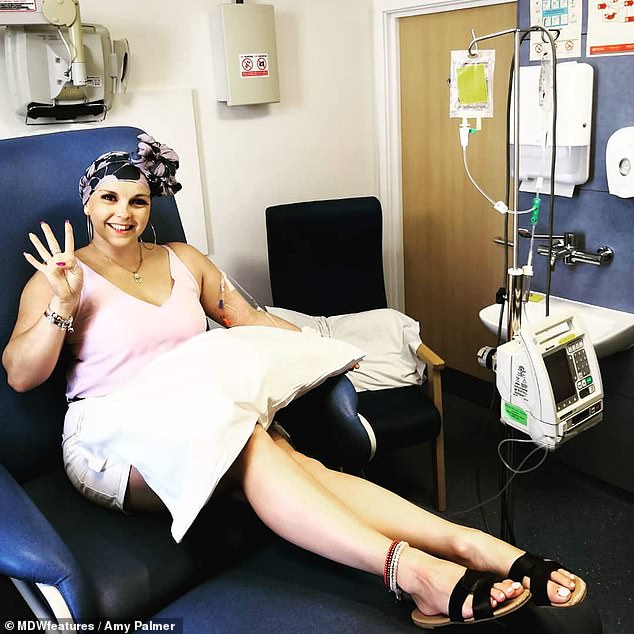 Mrs Palmer, at her fourth round of chemotherapy in July, believes the Government should lower the screening age of mammograms

Mrs Palmer, who works in home support for the elderly with Age UK, said: ‘It’s been hard explaining to Frankie that mummy is poorly, but she will be alright.

‘The mum guilt has been horrendous and I feel like I’ve missed out on a lot.

‘I just want young girls to check regularly and not be afraid to go to the doctors. I believe we should be able to have mammograms early for this exact reason.

‘Unfortunately, anyone can get cancer. I never checked regularly and I believe if I wasn’t breastfeeding my boy, I wouldn’t have found it. Breastfeeding saved my life.’

Less than a month after completing the Exeter half marathon in February and celebrating her 30th birthday, Mrs Palmer found the lump in her right breast while breastfeeding.

She saw her GP about the lump but was assured it was only mastitis – when a lump or red swollen area that can be painful occurs where milk has built up in the breast.

In non-breastfeeding women, mastitis most often occurs when the breast becomes infected as a result of damage to the nipple, according to the NHS.

Mrs Palmer was told she need only come back if the lump was still present two weeks later. 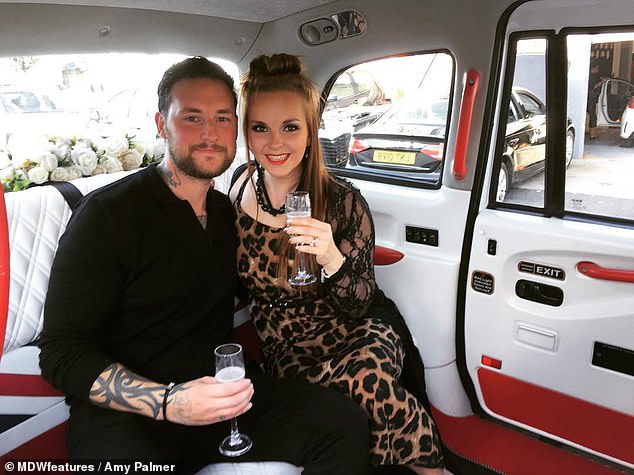 Mrs Palmer said breastfeeding saved her life because she never checked her breasts before. She is pictured with Mr Palmer before starting chemotherapy 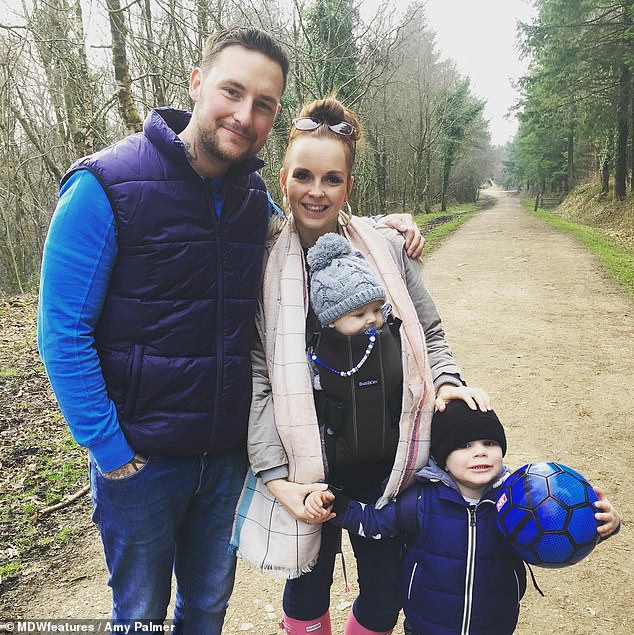 Mrs Palmer had to stop breastfeeding after the diagnosis in March and feels ‘mum guilt’ due to the effect on her sons. The family are pictured in February 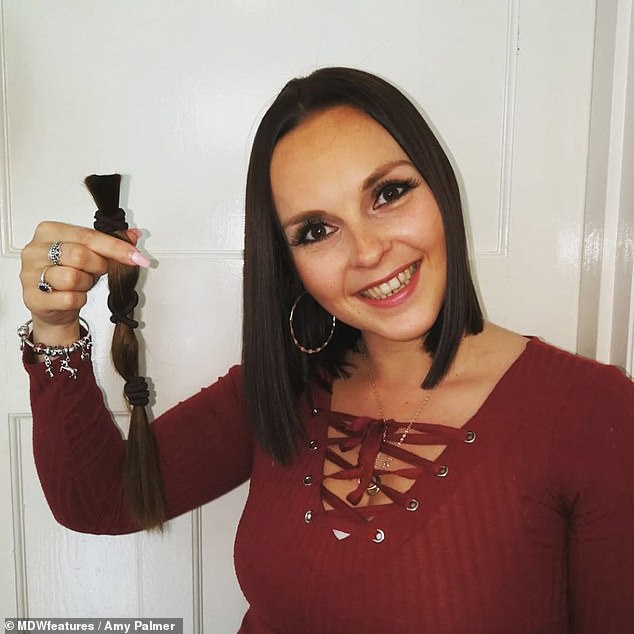 Mrs Palmer is currently undergoing six rounds of chemotherapy and cut her hair off, which was down to her waist, before it started (pictured) 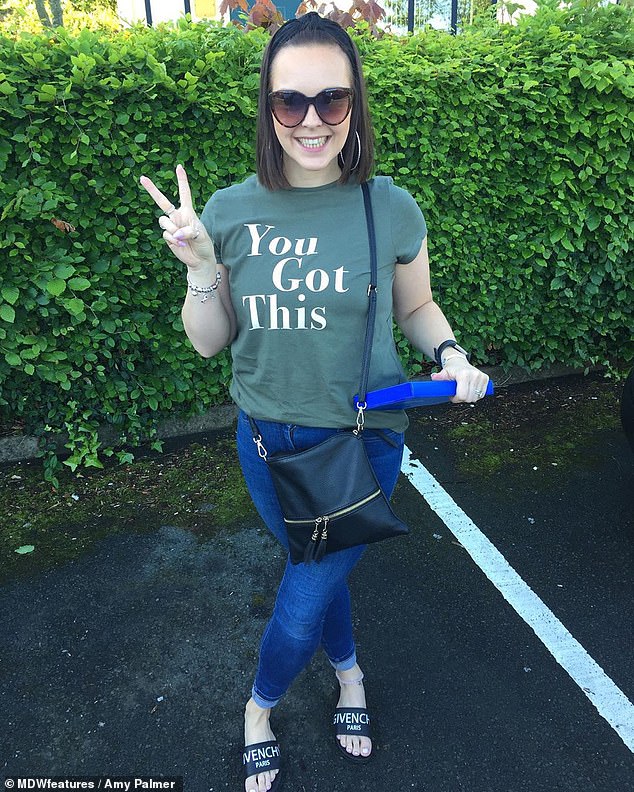 Mrs Palmer said she already knew she had cancer when she got the call from the doctors following a biopsy. She is pictured at hospital

After two weeks, the lump was still noticeable, so she returned to have an ultrasound and a biopsy of the lump, but the doctors still insisted it was unlikely to be cancer.

WHO IS ELIGIBLE FOR BREAST CANCER SCREENING AND HOW DOES IT WORK?

What is breast cancer screening?

Screening is a procedure which allows doctors to catch breast cancer while it is still in its infancy and therefore easier to treat.

It involves an X-ray test – known as a mammogram – to check for signs of cancer which are too small to see or feel.

The results of the mammogram will be sent to the women and her GP within two weeks. Around 5 per cent will be called back for further tests.

Any woman concerned that they might have breast cancer can see their GP and be referred for a screening.

But in recognition that the risk of getting breast cancer increases with age, all women aged between 50 and 70 who are registered with a GP should automatically be invited for screening every three years.

Women are first invited for screening between their 50th and 53rd birthday, although in some areas they are invited from age 47 as part of a trial.

How are they invited?

The screening process is overseen by Public Health England, which uses an IT system to send out invitations.

Mrs Palmer said: ‘I got a phone call the following week to say they had my results back and they asked if I was able go in that afternoon.

‘I knew then that I had cancer. I remember I couldn’t get hold of my husband so then I rang my mum and told her it was bad news straight away.

‘So, when I got there later that day and they told me it was cancer I sort of already knew, but me and my husband cried, nonetheless.’

Mrs Palmer was diagnosed with HER2 positive breast cancer, an aggressive form of the disease whereby a protein called human epidermal growth factor receptor 2 (HER2) promotes the growth of cancer cells.

In about one of every five invasive breast cancers – breast cancers that could spread to other parts of the body – the cancer cells have a gene mutation that makes an excess of the HER2 protein, according to the Mayo Clinic.

Around 268,600 new cases of invasive breast cancer will be diagnosed in American women this year, according to The American Cancer Society.

Around 55,200 people are diagnosed with breast cancer every year in the UK, according to Cancer Research UK.

One in seven women in the UK develop breast cancer during their lifetime. It is more common in older women.

Mrs Palmer had a lumpectomy on April 11 which removed a lump an inch in size.

After receiving her diagnosis, Mrs Palmer had to stop breastfeeding her youngest son within 48 hours so that the chemotherapy drugs would not be passed through the milk.

She said: ‘The first difficulty I had to face was having to stop breastfeeding which I really struggled with.

‘I breastfed Frankie for 12 months and had planned to do the same with Lenny. I loved breastfeeding.

‘Thankfully, he [Lenny] took to the bottle like a little gem, which made my life so much easier.’ 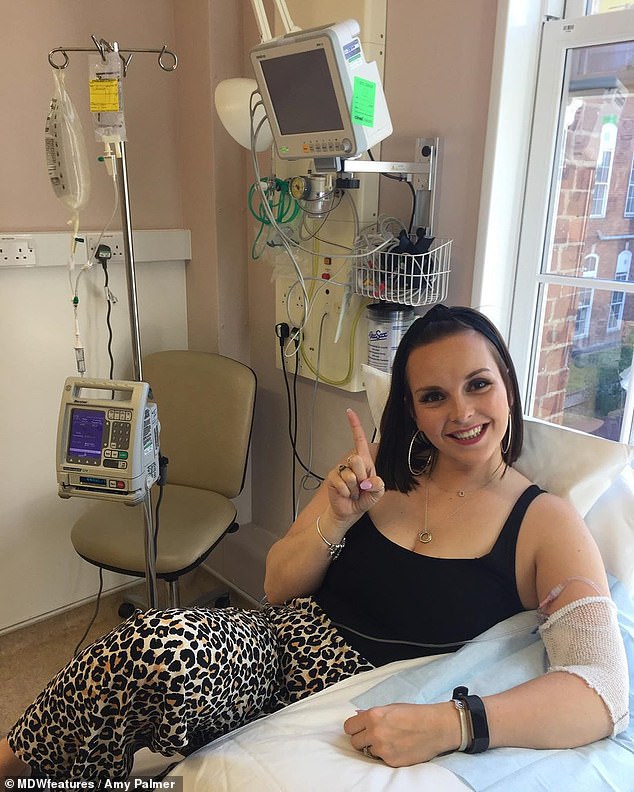 After receiving her diagnosis, Mrs Palmer had to stop breastfeeding her youngest son within 48 hours. Pictured during her first chemotherapy 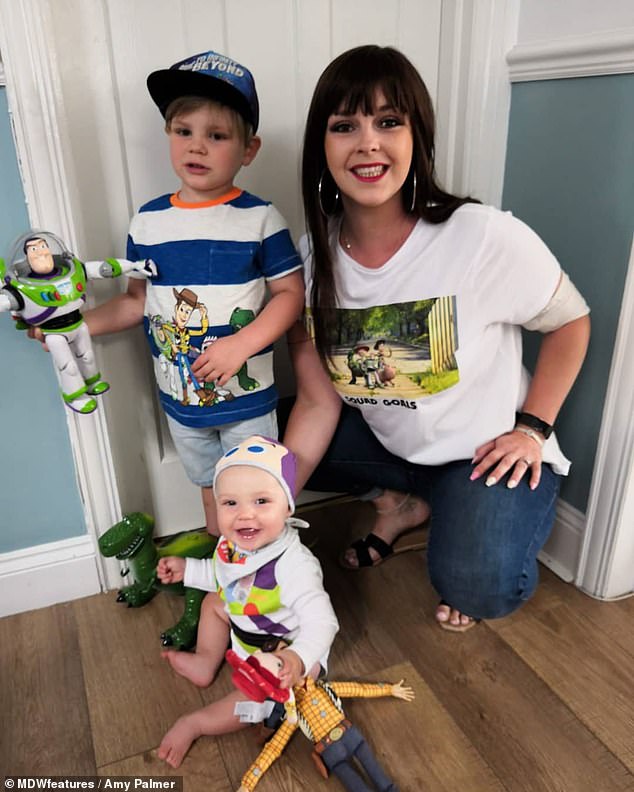 Mrs Palmer, picture with her sons in June, said: ‘Chemotherapy hasn’t been easy, especially with two young children. It’s exhausted me and had many different side effects including awful nausea, mouth sores and my body aches’ 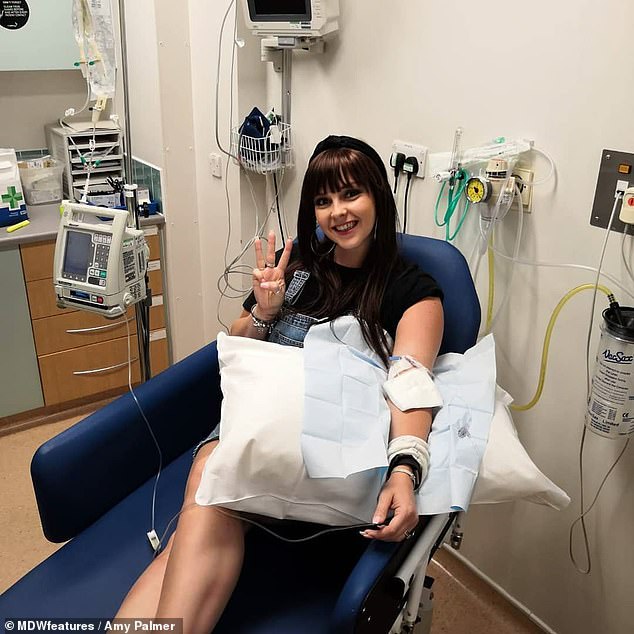 Mrs Palmer, pictured during her third round of chemotherapy, said: ‘I just want young girls to check regularly and not be afraid to go to the doctors’

It was also difficult for Mrs Palmer to explain to Frankie what was wrong.

She said: ‘We have been very honest with Frankie, but in a child friendly way, which has worked well for us and we are so proud of him for every hurdle he has taken on. Luckily Lenny is too young to understand.’

She said: ‘The hair loss was the next biggest thing which made me cry for days.

‘My hair was down by my waist, so before I started chemotherapy, I decided to chop it off and donate it.

‘Then, when it did start falling out, it felt like my comfort blanket was being ripped away, so I decided to shave it off and get one step ahead of cancer.’

‘Chemotherapy hasn’t been easy, especially with two young children. It’s exhausted me and had many different side effects including awful nausea, mouth sores and my body aches. 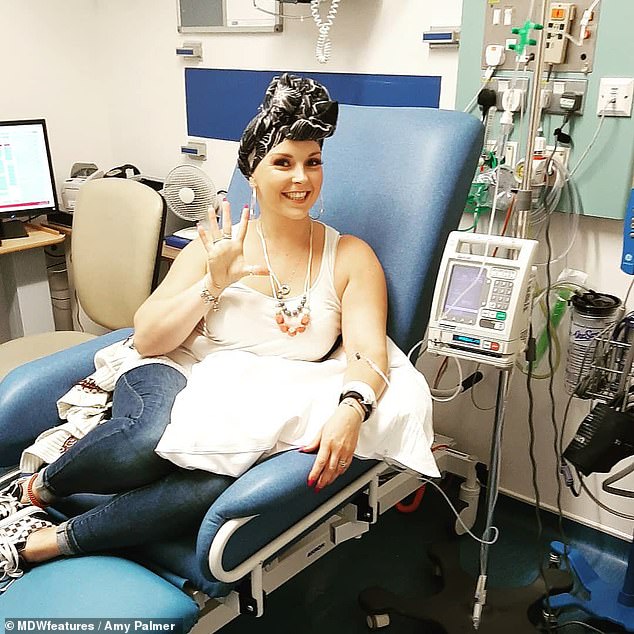 Mrs Palmer, pictured during her fifth round of chemotherapy in August, will be getting radiotherapy from October 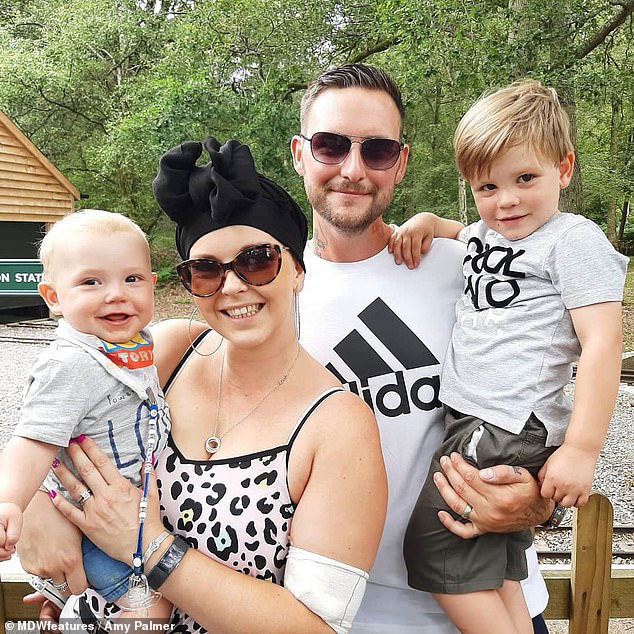 ‘After my first chemotherapy, I was hospitalised with sepsis, which wasn’t nice for my family and it was the first time I’d ever been away from my children.’

Mrs Palmer’s cancer diagnosis took her entire family by shock because she was a young and healthy new mother.

She has learned that breast cancer can affect women at any age, but mammogram screening is only applicable for women aged 50 and over.

However, Mrs Palmer is urging for the minimum age to be lowered to at least 18 years old so breast cancer can be discovered in younger women at an earlier stage.

She said: ‘You just never think it’s going to happen to you

‘It affected my family a lot, but they have all been incredible, especially my mum and dad who have had to help me on the days when I struggle to get out of bed.

‘I make sure I get out with the boys as much as I can, even if I have to force myself out for an ice cream on my worst days! I will spend the rest of my life making it up to them.

‘Since day one, I have always said that my diagnosis has been harder for the people around me. All I can do is get through it and stay positive, yet everyone around me feels helpless.

‘The amount of support I have had has been overwhelming and I can’t thank everyone enough.’

HOW TO CHECK YOUR BREASTS

What to look out for

This is why it is so important to feel AND look at you r boobs. Dimpling and puckering of the skin can look similar to orange peel

It is important to check not just your boob but your upper chest and armpit too, as these areas also contain breast tissue

This is liquid that comes from the nipple without squeezing it

Most women may naturally have one boob bigger than the other or experience their boobs gradually changing as they get older.

Many changes are perfectly normal, however if you notice a sudden, unusual change in size or shape then get it checked out

All this means is your nipple has become pulled into the boob or looks different to usual. This could be a change in its position or shape. That’s why it is important to pay special attention to your nipple during your regular checks

There are many reasons why your skin could become irritated, especially if you are breast feeding, but if you notice any redness or a rash on the skin and/or around the nipple or any crusting of the nipple, make sure you get it checked out by your doctor

What to feel for

Some boobs are naturally lumpy and this can be perfectly normal. The key is to get to know how your boobs feel, so you would notice if any new lumps appear or if your boob starts to feel thicker in one area compared to the rest

Some breast pain can be perfectly normal, especially around your period. But keep an eye out for any unexplained pain in your breast or your armpit that’s there all or almost all of the time

Arachnophobic web designer, 27, pulls out a spider from his EAR

Operators reveal behind the scenes of suicide prevention hotlines