More than two million pounds of chicken have been recalled in eight states due to a possible metal contamination.

No one has reported any ‘adverse reactions’ yet from consuming the poultry products, according to a press release from the US Department of Agriculture (USDA) on Wednesday. 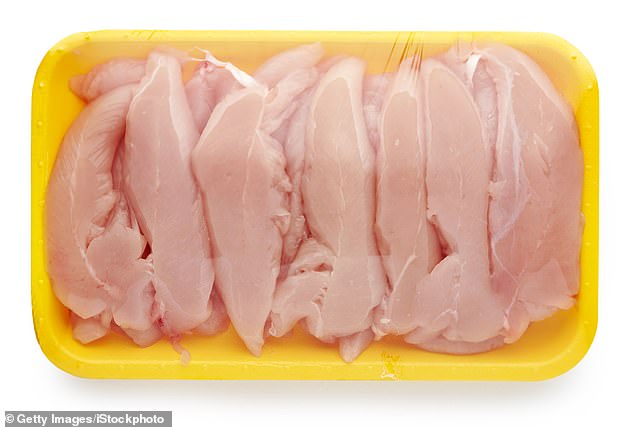 Simmons Prepared Foods, Inc is recalling 2,071,397 pounds of ready to cook chicken products in eight states over fears they may be contaminated with metal (file image)

The products were produced between October 21, 2019 and November 4, 2019, according to the USDA’s Food Safety and Inspection Service (FSIS).

The release states that employees at Simmons discovered the problem during further processing.

However, it remains unclear how the metal got into the poultry products, the type of metal that was found by officials and when it was discovered.

FSIS designated the recall as Class I, meaning ‘a health hazard situation where there is a reasonable probability that the use of the product will cause serious, adverse health consequences or death’.

Customers are urged not to consume the products and either throw them out or return them to the store where they were purchased for a refund.

FSIS says anyone with questions about the recall can call Donald Miller, senior vice president of sales at Simmons Prepared Foods, Inc, at (888) 831-7007.

This is the latest in a series of recalls of food products due to metal contamination.

In September, Kenosha Beef International, which sells seasoned beef to Taco Bell, recalled an unspecified amount after metal shavings were found in the meat.

Grayscale Is Now Buying 1.5 Times the Amount of Bitcoin Being...

Millions of women who take HRT pills may face a greater...

Dominican Republic named the most dangerous place to travel for plastic...