Meltdown at M&S: More stores facing the axe as chain records lowest profit for three decades with next year’s divi cancelled too

By Tom Witherow For The Daily Mail

Marks & Spencer has warned it may shut more shops to survive in the post-pandemic world, as it grapples with a growing mountain of unsold clothes.

The 136-year-old chain revealed it had been forced to write off £145million on clothes it has been unable to sell during the lockdown, with profits collapsing to a three-decade low.

The situation has become so desperate during the lockdown that the retailer announced it would be ‘hibernating’ £200million of stock in the hope it will be able to sell it next year.

Clothing sales fell by three-quarters in the six weeks to May 9, as strong online sales failed to offset the collapse in business at its physical stores.

Non-essential retailers had to shut down from March 23, meaning M&S has only kept its food outlets open.

But even food sales were down 8.8 per cent, as its cafes have closed and demand fell at stores in airports and railways. 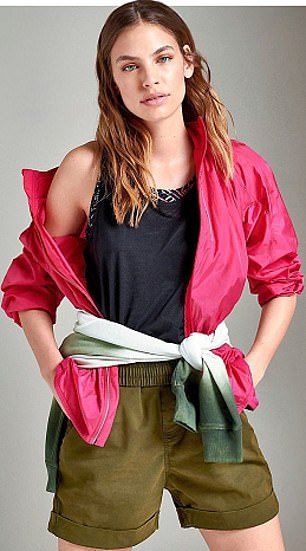 The retailer is already closing up to 120 of its 1,035 stores but the coronavirus has forced bosses to reconsider the future of dozens more locations, raising fears about thousands of jobs.

Chief executive Steve Rowe said the crisis has ‘given us the chance to cut back harder’, adding: ‘The world will never be the same again. Where we haven’t got viable stores, that will lead to closures.’

Annual profits before tax slumped by a fifth to £67.2million – on sales of more than £10billion – after being hammered by £213million of costs and stock writedowns related to the pandemic.

Excluding these ‘exceptional items’, profits were still down 21.2 per cent to £403.1million in the year to the end of March – the retailer’s lowest level in three decades, and well below the £1.1billion it made in 2008.

M&S has over £1billion of stock and orders on its books, meaning £200million of clothes will be resold next year.

But some will also need to be discounted to shift it, and the company took a £145million charge to account for this.

M&S’s 300,000 private investors were dealt yet another blow as bosses said they do not intend to pay £340million in dividends in the year to March 2021, just weeks after the £130million year-end dividend for 2019/20 was cancelled.

The group, which was fighting for relevance even before coronavirus struck, has been hit hard by the lockdown.

Its supermarket business has grown in the ‘high single-digits’, with growth strong at stores with car parks. But city centre locations, which usually sell sandwiches and ready meals to workers, are struggling.

Some 27,000 staff are on furlough, saving £50million, and at the height of the virus there were 16,000 staff at home sick or self-isolating.

M&S is also benefiting from £172million of business rates relief.

The company has set a target of doubling the size of its food business in a partnership with Ocado, which will start delivering M&S food to homes in September.

Customers will be able to order 1,600 items of clothing through its website, and 6,000 food items.

Rowe is bringing forward plans to invest in city centre stores and streamline ranges. Head office roles may also be cut. The shares rose 10.8 per cent, or 9.24p, to 95.04p.

Glorious family holidays and luxury breaks are at half price –...

MIDAS SHARE TIPS: Even under a Labour Government you can still...