A giant cannibalistic parrot that stood more than three feet tall and lived in New Zealand 19 million years ago has been dubbed ‘squawkzilla’.

Scientists reckon the animal, which is officially known as Heracles inexpectatus, feasted on other parrots to nourish its massive frame.

The tree-dwelling creature is believed to have used its enormous beak to feed on the flesh of its own species.

It is thought to be the largest parrot ever and rivals the famed dodo in its bulk, and towers above the current flightless inhabitants of New Zealand, the kakapo.

The bones of a giant cannibal parrot, officially named Heracles inexpectatus, have been found in Central Otago in New Zealand

WHAT WAS THE HERACLES INEXPECTATUS?

The Heracles inexpectatus was the biggest parrot ever and lived in New Zealand 19 million years ago.

Scientists believe the gigantic bird was a cannibal who used its enormous beak to feed on the flesh of its own species.

The bird rivals the dodo in height at 3ft 2in, and is bigger than the current flightless parrots of New Zealand, the kakapo.

Heracles was dug up at a famous fossil site in Central Otago known as St Bathans – a graveyard of prehistoric animals from the late Early Miocene.

Professor Trevor Worthy, a palaeontologist at Flinders University in Adelaide, South Australia, said: ‘We have been excavating these fossil deposits for 20 years, and each year reveals new birds and other animals.

‘While Heracles is one of the most spectacular birds we have found, no doubt there are many more unexpected species yet to be discovered in this most interesting deposit.’

The area was once a shallow, freshwater lake bordered by an extensive floodplain containing herbaceous and grassy wetlands.

The idyllic setting was home to fish, crocodiles, geckos and several kinds of wading and tree-dwelling birds – especially parrots.

The parrot’s official name is to mark its Herculean myth-like proportions and strength which helped it crack open any shells containing nuts and rip other birds to shreds. 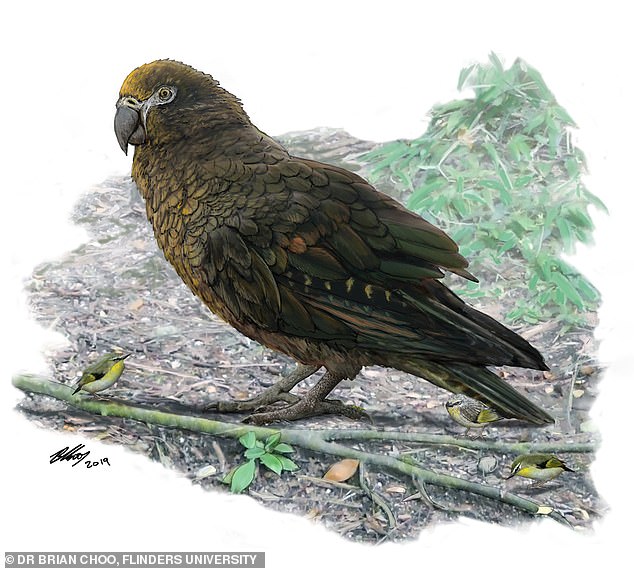 ‘Squawkzilla’, pictured in an artist’s impression next to some wrens, was as tall as the average four-year-old child and weighed almost a stone (7kg)

The massive bird was as tall as the average four-year-old child and weighed almost a stone (7kg).

Professor Worthy said that until now, no one has ever found an extinct giant parrot anywhere on the planet.

The research team were able to reconstruct Heracles from the remains of two incomplete shinbones.

It was similar in size to the legendary dodo – the giant pigeon hunted to extinction in the 17th century by sailors visiting the Mascarene islands in the Indian Ocean.

Birds have repeatedly evolved giant species on islands. As well as the dodo there have been giant pigeons, storks and ducks on Fiji, Flores and Hawaii, respectively.

There have also been giant megapodes in New Caledonia and Fiji and giant owls and other raptors in the Caribbean.

This is a biological phenomenon in which the size of an isolated animal increases dramatically in comparison to its mainland relatives.

WHY DID THE DODO GO EXTINCT?

Little is known about the life of the dodo, despite the notoriety that comes with being one of the world’s most famous extinct species in history.

The bird gets its name from the Portuguese word for fool after colonialists mocked its apparent lack of fear of human hunters.

The 3ft (one metre) tall bird was wiped out by visiting sailors and the dogs, cats, pigs and monkeys they brought to the island in the 17th century.

Because the species lived in isolation on Mauritius for millions of years, the bird was fearless, and its inability to fly made it easy prey.

Its last confirmed sighting was in 1662 after Dutch sailors first spotted the species just 64 years earlier in 1598.

As it had evolved without any predators, it survived in bliss for centuries.

The arrival of human settlers to the islands meant that its numbers rapidly diminished as it was eaten by the new species invading its habitat – humans.

Sailors and settlers ravaged the docile bird and it went from a successful animal occupying an environmental niche with no predators to extinct in a single lifetime.

Other birds, such as the kakapo in New Zealand,  also evolved to be similarly fearless, plump and sluggish.

As humans spread around the world, they also decimated the population numbers of these birds.

The kakapo is now an endangered species.

The dodo (left) is now extinct after a 17th century assault of hungry sailors destroyed the population of the docile, fearless birds. The kakapo (right) is a similarly flightless, fearless bird that is now struggling to survive and is currently endangered

Generic Drugmaker Gets Contract to Make Covid-19 Medicines in U.S.

Watch the moon appear to REVERSE as it transits the sun...

Tired people are less likely to vote and give to charity