They are billed as healthy and environmentally friendly.

But many meat-free foods are highly processed and crammed with salt, a damning report has found.

An investigation by researchers at the National Heart Foundation in Australia looked at the salt content in more than 560 meat alternative products on supermarket shelves.

On average, it found vegan sausages were packed with more salt than their meat alternatives. Results showed they contained 1.3g of salt per 100g – more than a third of an adult’s recommended daily intake.

Falafel – a trendy alternative to meat favoured by the health conscious – also had 1.3g of salt per 100g.

On average, vegan sausages were packed with more salt than their meat alternatives (per 100g, pictured) and contained more than a third of an adult’s recommended daily intake 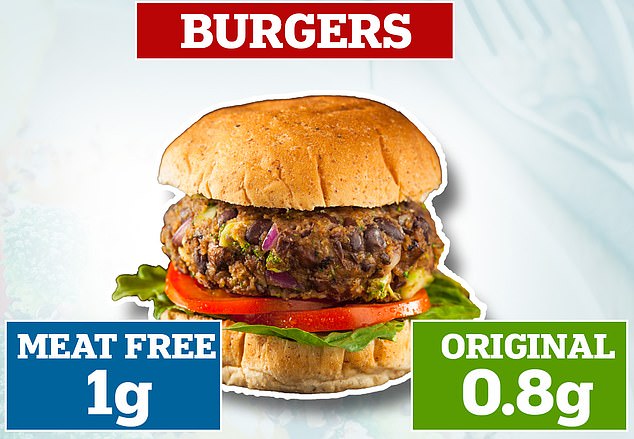 The World Health Organisation (WHO) recommends no more than a teaspoon of salt, or around 5g, each day.

Worldwide, CVD causes an estimated 31 per cent of deaths, and 17.9million each year, according to estimates.

Having high blood pressure puts people at risk of CVD because it puts extra strain on the blood vessels and heart.

The condition, known as hypertension, affects more than one in four adults in the UK, and one in three in the US, official statistics show. 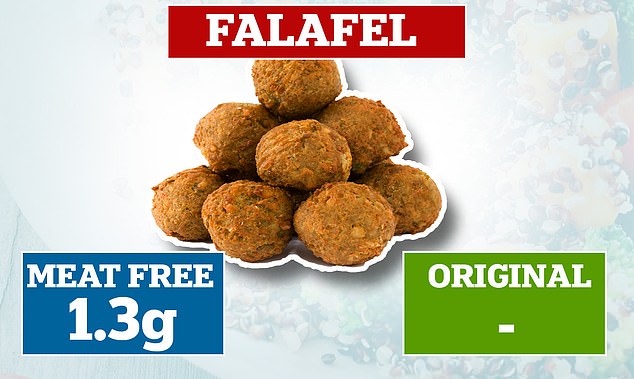 Falafel – a trendy alternative to meat favoured by the health conscious – was rammed with more than a quarter of an adult’s entire daily allowance on average (per 100g, shown) 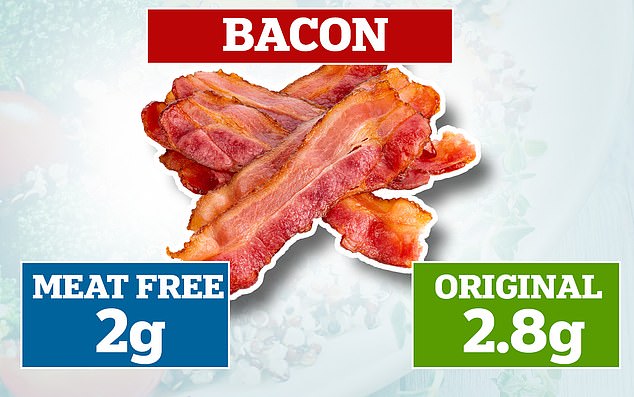 Two rashers of meat-free bacon (roughly 100g) contained only slightly less salt than their traditional pork counterparts. But they still accounted for well over a third of the recommended daily amount of salt

Consuming too much salt raises the amount of sodium in the blood, causing fluid retention inside the body which results in higher blood pressure.

Popularity of meat-free diets has been on the rise, with around 1.7million people in Britain now avoiding meat.

Britons, particularly young adults, have been moving away from red meat for animal welfare and environmental reasons.

WHAT IS CARDIOVASCULAR DISEASE?

Cardiovascular disease (CVD) is a general term for conditions affecting the heart or blood vessels.

It’s usually associated with a build-up of fatty deposits inside the arteries, known as atherosclerosis.

It can also be associated with damage to arteries in organs such as the brain, heart, kidneys and eyes.

CVD is one of the main causes of death and disability in the UK, and the cause of 31 per cent of deaths globally, statistics show.

There are many different types of CVD, but the four main types are coronary heart disease, stroke, peripheral arterial disease and aortic diseases.

Four out of five CVD deaths are due to heart attacks and strokes, according to WHO.

More than 75 per cent of CVD deaths occur in low-income and middle-income countries.

The exact cause of CVD isn’t clear, but there are many risk factors. The main ones are high blood pressure, high cholesterol, smoking, too much alcohol, diabetes, inactivity and obesity.

The more risk factors you have, the more likely you are to get CVD. The risk also increases with age – it is the most common in those over 50 – if you are a man, or if you are from a south Asian, African or Caribbean background.

It’s recommended to have a balanced diet, with the addition of regular exercise, to ensure a healthy heart, including enough fruit and vegetables and low levels of salt, sugar and fat.

The move has seen sales of meat-free products in supermarkets triple in less than a decade.

Sainsbury’s, Waitrose, Tesco and Iceland stock more than 100 ‘meatless’ products on their shelves, while fast-food firms have also started to cash in.

The report, conducted with The George Institute for Global Health, based in London, and VicHealth, found that the highest salt product per serving was the vegan Bean Supreme Laksa pie.

Heart Foundation’s Victoria chief executive officer Kellie-Ann Jolly, said while the growing number of people choosing to eat plant-based food was positive, it is important consumers put focus on the quality and sources of the products.

She added: ‘Some can be highly processed and lacking in nutrients. Meat alternatives such as tofu and falafel can be good protein sources as part of a healthy balanced diet.

‘But with any processed or packaged foods, it’s critical not to rely on words or images that make a product appear healthier than it is. Check the label and pick the less salty option.’

The George Institute’s senior public health nutritionist and the report’s lead author, Clare Farrand, said she was concerned by the findings.

‘It’s concerning that, in nearly a decade, there has been no change to the salt levels in any of the meat alternative products we looked at, and that new products coming on to the market are so high in salt, despite government commitments to reduce population salt intake,’ Ms Farrand said.

‘The UK has one of the lowest salt intakes of any developed country, and this has been achieved by setting voluntary salt targets and regular monitoring of the food industry to achieve those targets.

‘Salt targets for the food industry in Australia are coming, which is great, but there are no salt targets for meat alternatives, and this will need to be addressed.’

VicHealth acting chief executive Dr Lyn Roberts shared some simple tips for shoppers wanting to enjoy meat-free meals without the side of salt.

‘There are some fantastic plant-based foods that are low in salt, often less expensive and very healthy like plain tofu, legumes like lentils and black beans, and of course fresh vegetables,’ Dr Roberts said.

‘Try marinating your tofu in ginger, garlic and a bit of reduced-salt soy sauce for your stir-fry or fill your veggie burger with chargrilled mushrooms fresh off the BBQ.

‘We want people to remember that meat alternatives like vegan sausages, pies and burgers can be highly-processed treat foods and certainly aren’t something we recommend eating regularly.’

Tam Fry, expert advisory team member at Action on Salt, said: ‘Just because meat-free products are becoming fashionable, many food companies think that they can bend the rules to make their product even ‘ tastier ‘ – but they are getting out of hand.

‘They’ve been rumbled by the Institute and its research is a reminder always to read the labels.’

Meals should be based on potatoes, bread, rice, pasta or other starchy carbohydrates, ideally wholegrain, according to the NHS

• Base meals on potatoes, bread, rice, pasta or other starchy carbohydrates, ideally wholegrain

• 30 grams of fibre a day: This is the same as eating all of the following: 5 portions of fruit and vegetables, 2 whole-wheat cereal biscuits, 2 thick slices of wholemeal bread and large baked potato with the skin on

• Eat some beans, pulses, fish, eggs, meat and other proteins (including 2 portions of fish every week, one of which should be oily)

• Choose unsaturated oils and spreads and consuming in small amounts

Mother-of-three is embracing her mastectomy scars by posing topless after beating...