MARKET REPORT: Synairgen soars 27% as US authorities agree to step up trials of the UK drug maker’s Covid treatment

The string of Covid vaccines in development has been in the spotlight for weeks.

But drug firms are still doggedly plugging away in the background to make treatments for those who are struck down with the deadly virus – and AIM-listed Synairgen has been one of these firms.

At the start of the pandemic the Southampton-based group quickly put forward one of its treatments – which patients inhale – that is usually used by those with chronic obstructive pulmonary disease or asthma.

The move put its name on the map and has driven a stellar 2280 per cent rise in its share price in the year to date.

A phase three trial is on the brink of starting in the UK after the National Institute for Health Research designated it an urgent public health study. And yesterday Synairgen was celebrating after it was given the all-clear to speed up a trial in the US.

Synairgen has agreed to tweak the study to get the fast-track designation. By cutting out plans to test a lower dose of the drug it will cut down the number of patients needed from 900 to 610.

It has also agreed to change the outcomes measured by the trial and to add assessments with those suffering from long-Covid. 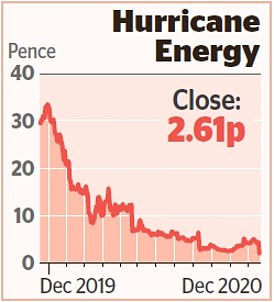 Investors scrambled to sell out of Hurricane Energy after it warned its holdings could be diluted – or that they could even be left with ‘no value’.

The North Sea oil and gas group – which for a long time was an AIM darling – is in talks with bondholders and other stakeholders about its future following a torrid year when the firm admitted it could not keep production going at the levels it had promised.

As boss Richard Marsden said, having breakthrough treatments for patients who become ill with Covid is ‘especially important if vaccine uptake is poor for any reason, or any mutations in the Sars-Cov-2 virus render the vaccines less effective’.

Shareholders clearly agreed – with the company’s stock surging 27.5 per cent, or 30p, to 139p in its latest rally.

Another junior market minnow, immunotherapy developer Scancell Holdings, also ended the week with a bang after it selected a Covid-19 vaccine candidate for further development and clinical trials. It closed 14.6 per cent higher, or 1.75p, to 13.75p.

JP Morgan analysts were more positive – raising their predictions of a deal to 70 per cent from 60 per cent – but the City was spooked nonetheless.

In corporate news, outsourcer Capita sank 5 per cent, or 2.05p, to 38.88p despite bagging a £925million contract as part a consortium that includes US weapons maker Raytheon.

Under the 12-year deal, Capita and the other groups will oversee Royal Navy and Royal Marines training – including running the gruelling live on-the-ground training as well as new training simulation technology.

Paddy Power-owner Flutter Entertainment (down 3.8 per cent, or 590p, to 14900p) was rattled after it unexpectedly lost a legal case in Kentucky and was slapped with a £645m penalty.

The case had been brought in 2010 against The Stars Group, which Flutter bought earlier this year, after some Kentucky residents incurred losses on the Pokerstars website, owned by Stars.

Among the small-caps, funeral provider Dignity dived after the Competition and Markets Authority said customers must be provided with pricing information before they make bookings, as the watchdog said it still has ‘serious concerns’ about the unregulated sector and could launch a new in-depth probe.

Is it time to trust a bank with your investment nest-egg?