The airline removed the two Boeing 787-10 planes, which have Rolls’ Trent 1000 TEN engines, from service until new ones are fitted because checks showed that the blades were deteriorating too quickly.

FTSE 100 aerospace giant Rolls had already warned airlines that the engines have a shorter-than-expected shelf life – and its engineers are scrambling to develop and test a new, improved version.

Flaws: Rolls has warned airlines that the Trent 1000 TEN engines have a shorter-than-expected shelf life. Its engineers are scrambling to develop and test a new, improved version

It is the latest bump in the road for the Trent 1000 turbines.

As of late February, Rolls said 35 Boeing 787s had been grounded across the world due to the blades cracking or corroding.

And it also said in February that it expects to take a £790million charge for the problematic engines. 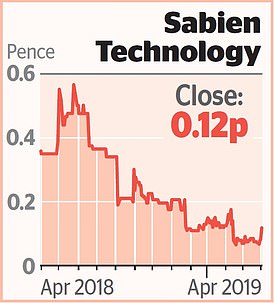 An £850,000 contract with a ‘major Government department’ sent shares in Sabien Technology soaring as much as 75 per cent higher.

The AIM-listed firm provides technology to make boilers more efficient, with energy use cut by up to a quarter.

Sabien said the contract brings total orders to date for this financial year, which ends in June, to £1.1million, more than double the £480,000 in orders it booked last year.

As blue-chip exporters make most of their revenues outside the UK, a decline in sterling strengthens their income in other currencies.

On the second-tier FTSE 250 index, housebuilder Galliford Try unveiled a partnership deal with Homes England to build more than 850 houses in Redcar, Cheshire, Staffordshire and Dorset.

The first properties will be completed by next spring. Galliford did not disclose the size of the deal.

On Monday it announced it had won £35million of work on two water industry contracts – and its share price climbed 1.6 per cent, or 10.5p, to 670p yesterday.

Wizz Air shares gained traction after it said profits for the year to March will be in the upper half of its guidance, which stands at £232million to £257million.

An increase in passengers wanting to fly on its central and eastern European routes helped in 2018.

It was a change in tone after Easyjet on Monday warned that Brexit uncertainty was hurting its business. Wizz rose 4.8 per cent, or 137p, to 3017p.

Polling expert Yougov suffered on the stock market despite reporting strong first-half revenue and profit growth due to US demand and increased take-up of its custom research services.

Profits rose 28 per cent to £13.7million, while revenue rose 18 per cent to £66.5million, though it said business has been hurt by ongoing political uncertainty in the UK and Europe.

The company unveiled a five-year plan that will make more data publicly available and aims to double revenue. But the market wasn’t quite sold on its ambitions, with shares losing 3.1 per cent, or 15p, to close at 426.5p.

The City was keen on Hostelworld Group, however, even though last year’s bumper UK heatwave and the timing of the football World Cup almost halved its profit to £5.7million.

Revenue at the hostel booking site fell 5.3 per cent, and it cut its final dividend by a quarter to nine euro cents per share.

But there was a glimmer of light due to a 4 per cent rise in bookings made through its main Hostelworld brand. Shares climbed by 2.4 per cent, or 4.4p, to 187p.

Fever-Tree shares fizzed after Merrill Lynch launched coverage of the stock market darling with a ‘buy’ rating and 4290p target price. The tonic maker’s share price rose 0.7 per cent, or 20p, to 3030p.

HOT OR NOT: Michael Owen’s rebirth as football’s firestarter and Romelu...

St Ives named as most popular seaside town on Rightmove

Woodford’ Equity Income Fund is closed: What it means for investors