How the times have changed for Ocado.

For years, the online grocer was sneered at by financial folk who questioned its methods and bet that its share price was about to crash at any moment.

But since it sealed a deal with US supermarket Kroger last May and an agreement to replace Waitrose with Marks & Spencer in February, many in the City have held their hands up and admitted they were wrong.

JP Morgan’s bullish stance on the once-derided online supermarket, which now appears to be racing ahead of its ailing store-based rivals, sent shares up 4.6 per cent, or 53p, to 1204p.

Although they kept a ‘neutral’ rating on Ocado’s stock for now, the analysts laid out a compelling case for future optimism.

Ocado spends the least amount of money in the industry physically putting together a customer’s online order because of the millions of pounds it has ploughed into robots at warehouses. JP Morgan noted.

The analysts said this means it is now at a tipping point in terms of profitability. 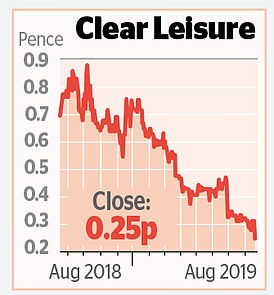 InvestmentNVESTMENT minnow Clear Leisure sank after a slew of trading and legal updates in a crowded announcement to the stock market.

The firm said it is in the final stage of negotiations to resolve a clash with a joint venture partner, digital currency firm 64Bit.

It is also frantically trying to recover cash from a site in Sardinia, Italy, where it had been attempting to build a theme park.

After Ocado made a full-year loss of £44.4million in 2018, investors will be hoping they are right.

Shares in energy majors Royal Dutch Shell and BP rose around 2 per cent, tracking a similar rise in oil prices, after Yemen’s Houthi rebels launched an attack on a huge oil and gas field in Saudi Arabia, upping the ante in an already tense Middle East.

World events also pushed up the share prices of some of London’s heavyweight miners and banks that have a big presence in Asia.

China’s central bank announced reforms to lower borrowing costs for companies and bolster the economy, which has been hit by the trade spat with the US.

China is the world’s largest consumer of metals, meaning anything which supports its economy is likely to boost demand. Mitie has sold its catering arm for £85million to a rival as part of efforts to simplify the business.

The outsourcer’s Gather & Gather unit is being bought by CH&Co for £73million up front, plus another £12million over the next four years if performance targets are met.

Under the deal, Mitie will set up an exclusive partnership with CH&Co to provide a catering service to its existing clients. Mitie’s shares rose 1.6 per cent, or 2.6p, to 161.6p.

Imperial Brands shares rose 1.1 per cent, or 22.5p, to 2111.5p, despite reports that a number of its biggest investors want parts of the company to be sold and board members sacked.

Four of the Gauloises and Davidoff-maker’s top 30 shareholders are said to be unhappy with the firm, whose share price has halved in the last three years.

Big tobacco giants are having to make drastic changes as smoking has fast-declined in the West, with many former smokers taking up vaping instead.

How Tupperware Lost Its Grip on America's Kitchens