Shares in AO World were put through the wash yesterday after it admitted it would take a £2.5million hit this year.

The white goods and electricals retailer said an overhaul of its management team, following the return of founder John Roberts as chief executive, will dent its bottom line.

The costs also relate to a loss-making contract in Germany.

Roberts, 48, who started the firm as a £1 pub bet, returned in January to take over from Steve Caunce, his former business partner.

Roberts’ decision to abandon TV advertising and focus instead on social media is understood to have led to a string of redundancies.

The father-of-five is also preparing to launch a £2-a-week washing machine rental service. His re-appointment after two years away came after it posted a £10.3million half-year loss.

AO World said full-year profits are likely to come in at the lower end of market forecasts, but expects to rake in £900million in sales, 13 per cent higher than a year earlier. Shares fell 5.7 per cent, or 5.5p, to 91.5p as investors digested the news. 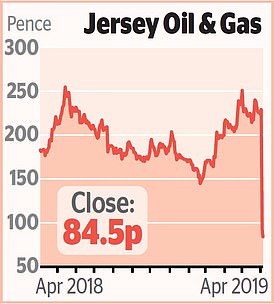 Shares in Jersey Oil & Gas fell another 10 per cent yesterday after an underwhelming result from a well earlier this week.

The North Sea oil explorer’s stock lost almost 60 per cent of its value on Wednesday after it said the Verbier well contained only around 25m barrels of oil equivalent.

This was at the lower end of a range that went from 25m to 130m barrels of oil equivalent.

London’s main index had traded lower earlier in the day as a number of blue-chip stocks went ex-dividend – meaning those buying shares after that date will not be entitled to a company’s next scheduled dividend.

Shares in London’s oil majors BP and Royal Dutch Shell fell by more than 1 per cent in early trading after weekly data revealed a surprise increase in the amount of oil in US stockpiles and an uptick in its production levels.

UDG Healthcare made gains on the mid-cap FTSE 250 index after analysts at Barclays upgraded their rating on its stock to ‘overweight’ from ‘equal weight’.

The Dublin-based company, which is a contractor for the healthcare industry, rose 4.5 per cent, or 27p, to 622.5p after Barclays brokers said they ‘expect earnings upgrades and view management guidance as conservative’.

The market was confident in the prospects of Motif Bio, which is trying to create new antibiotics, after it raised £2.7million through a share placing that priced its shares at 6p a pop.

Motif will use the £2.7million to keep the business going as it provides more information to the US Food & Drug Administration in the next few months about its antibiotic, Iclaprim, which was developed to treat skin infections.

Home repairs provider Homeserve rose after it said its annual profit will be at the upper end of City expectations and significantly more than the £142million it made the year before.

The company, which offers monthly plumbing and drainage cover as well as one-off emergency call-outs, saw its shares lift 1 per cent, or 10p, to 1082p.

This is the world’s first 3D printed hypercar that costs $1.7m and has a top speed of 268MPH

Kelsey Grammer turns 65: A look back at his biggest moments

I kept my final salary pension – was it a huge...