Male cane toads have a specific call for when they are mistaken for a female which they use when another male latches on to them.

It is designed to alert the confused animal to the fact they are trying to mate with their own sex and they will then dismount.

WHAT ARE CANE TOADS?

Cane toads are a large brown toad native to tropical America but found around the world.

It has been introduced elsewhere as a pest control agent but can be troublesome itself.

It is poisonous in all stages of its life cycle but no human deaths have been reported.

It is not an endangered concern and considered to be of ‘least concern’ to the IUCN.

A male will latch on to a female when mating and wait for her to lay her eggs at which point the male fertilises them.

Sometimes, males get this wrong and accidentally embrace another animal of the same sex.

The research suggests that for immature males who are not ready to find a mate, it is less of an inconvenience to be mounted, and more dangerous to be loud.

‘Male toads may inform other males about their sexual identity only when it is beneficial to do so,’ the researchers write in the paper.

In most frogs and toads, mating involves a male grasping a female and hanging on until she lays her eggs, which he can then fertilise.

Males often accidentally seize other males but these liaisons are often short-lived because the male that has been seized emits a specific call to alert his suitor that he is a boy not a girl.

The research, published in the journal Royal Society, found other factors, such as skin roughness, can determine how long the accidental cuddle lasts.

Known technically as an amplex, the hugs are commonplace in amphibians mating routines but are more complex than previously thought. 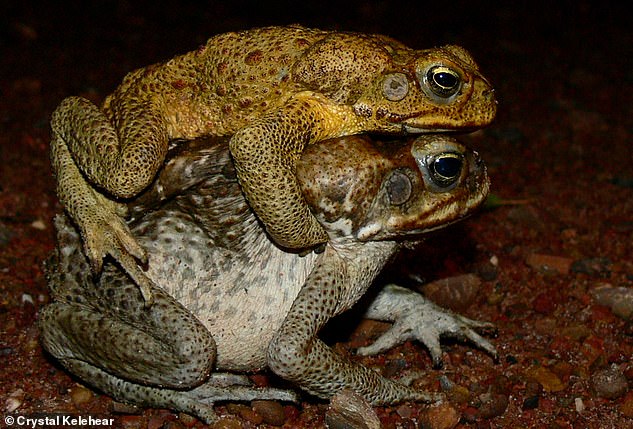 ‘Why did smaller, less reproductively active male toads fail to emit a release call when seized?,’ the researchers ask in the paper.

‘Under this scenario, we would expect all males to emit the release call if they are seized by another male.

‘But male tactics may be more complex than suggested by this classical scenario.

‘For a large male in peak reproductive condition, being clasped by a rival is a major cost because it prevents him from finding and clasping a female.

‘For a smaller less reproductively active animal, the cost may be lower.’

US border technologies proposed by Dems blasted by 27 tech and...

Elon Musk’s unveiling of the Model Y is overshadowed by his...