An ingenious way of ridding rivers and seas of microplastics has been developed – crucially, without harming micro-organisms.

Study senior author Shaobin Wang, a Professor of chemical engineering at the University of Adelaide, explained that, although often invisible to the naked eye, microplastics are ‘ubiquitous’ pollutants.

He said some, such as the exfoliating beads found in popular cosmetics, are simply too small to be filtered out during industrial water treatment. Others are produced indirectly, when larger debris like soda bottles or tires weather amid sun and sand.

But, using tiny coil-shaped carbon-based magnets, researchers in Australia have found a way of purging the plastic waste that poses a global environmental threat – with damaging health consequences for humans, fish and animals alike.

An ingenious way of ridding rivers and seas of microplastics has been developed – crucially, without harming micro-organisms

HOW DOES IT WORK?

To decompose the microplastics, the research team had to generate carbon nanotubes laced with nitrogen.

These trigger chain reactions that cut the various long molecules that make up microplastics into tiny and harmless segments that dissolve in water.

Shaped like springs, the carbon nanotube catalysts removed a ‘significant’ fraction of microplastics in just eight hours while remaining stable themselves in the harsh oxidative conditions needed for microplastics breakdown.

Prof Wang said: ‘Microplastics adsorb organic and metal contaminants as they travel through water and release these hazardous substances into aquatic organisms when eaten, causing them to accumulate all the way up the food chain.

‘Carbon nanosprings are strong and stable enough to break these microplastics down into compounds that do not pose such a threat to the marine ecosystem.’

To decompose the microplastics, the research team had to generate short-lived chemicals called reactive oxygen species, which trigger chain reactions that cut the various long molecules that make up microplastics into tiny and harmless segments that dissolve in water.

But reactive oxygen species are often produced using heavy metals, such as iron or cobalt, which are dangerous pollutants in their own right.

So, the researchers found a greener solution in the form of carbon nanotubes laced with nitrogen to help boost generation of reactive oxygen species.

Shaped like springs, these removed a ‘significant’ fraction of microplastics in just eight hours while remaining stable themselves in the harsh oxidative conditions needed for microplastics breakdown.

And, as a bonus, by including a small amount of manganese, buried far from the surface of the nanotubes to prevent it from leaching into water, the minute springs became magnetic. 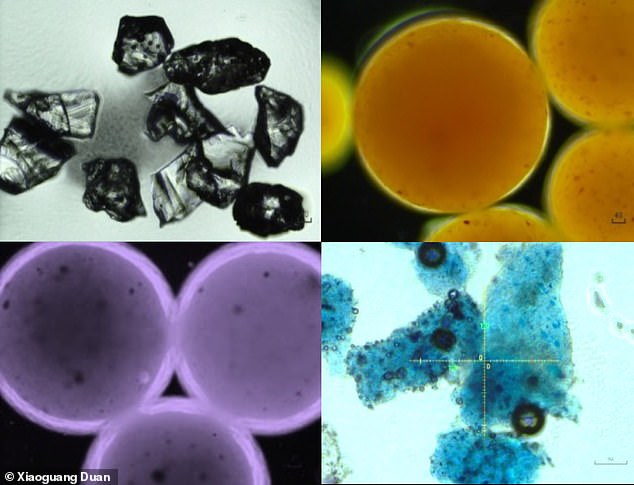 Pollutants: Each year, tonnes of tiny plastic waste — pictured here under the microscope — fails to get recycled, which can mean they end up in marine ecosystems

Project co-leader Dr Xiaoguang Duan, a chemical engineering research fellow at Adelaide, said: ‘Having magnetic nanotubes is particularly exciting because this makes it easy to collect them from real wastewater streams for repeated use in environmental remediation.’

As no two microplastics are chemically quite the same, the researchers said that their next steps will focus on ensuring that the nanosprings work on microplastics of different compositions, shapes and origins.

Prof Wang says that they also intend to continue to ‘rigorously confirm’ the non-toxicity of any chemical compounds occurring as intermediates or by-products during decomposition of the microplastics.

The researchers also say that those intermediates and byproducts could be harnessed as an energy source for microorganisms that the polluting plastics currently plague.

Prof Wang added: ‘If plastic contaminants can be repurposed as food for algae growth, it will be a triumph for using biotechnology to solve environmental problems in ways that are both green and cost efficient.’

The findings were published in the journal Matter.

WHAT ARE MICROPLASTICS AND HOW DO THEY GET INTO OUR WATERWAYS?

They have hit the headlines over recent years, as improper disposal has resulted in tonnes of waste making its way into the ocean.

Each year, tonnes of plastic waste fails to get recycled and dealt with correctly, which can mean they end up in marine ecosystems.

Although it’s unclear exactly how they end up in the water, microplastics may enter through simple everyday wear and tear of clothing and carpets.

Tumble dryers may also be a source, particularly if they have a vent to the open air.

Plastics don’t break down for thousands of years and it is estimated that there are already millions of items of plastic waste in the oceans. This number is expected to rise.

Studies have also revealed 700,000 plastic fibres could be released into the atmosphere with every washing machine cycle.

Current water systems are unable to effectively filter out all microplastic contamination, due to the varying size of particles.

The amount of plastic rubbish in the world’s oceans will outweigh fish by 2050 unless the world takes drastic action to further recycle, a report released in 2016 revealed.

More than 80 per cent of the world’s tap water is contaminated with plastic, research published in September 2017 revealed.

The US has the highest contamination rate at 93 per cent, followed by Lebanon and India, experts from the University of Minnesota found.

France, Germany and the UK have the lowest levels, however, they still come in at 72 per cent.

Overall, 83 per cent of water samples from dozens of nations around the world contain microplastics.

Scientists warn microplastics are so small they could penetrate organs.

Bottled water may not be a safer alternative, as scientists have found contaminated samples.

Creatures of all shapes and sizes have been found to have consumed the plastics, whether directly or indirectly.

Previous research has also revealed microplastics absorb toxic chemicals, which are then released in the gut of animals.

Builders find 4,000-year-old skeleton during renovation works at a hotel

Global warming is changing the colour of the sea!