There is nothing that means more to the Liverpool faithful. This is the trophy they have wanted for more than a quarter of a century.

Anfield is already tense. The doubt running through red minds is whether this vintage have the mental strength to last the full race and not fall to pieces at the final turn.

Liverpool have a unique record over the last decade. They are the only team to have topped the Premier League at Christmas and not won the title at the end of the season. In fact, since 2008-09 they have managed that twice. 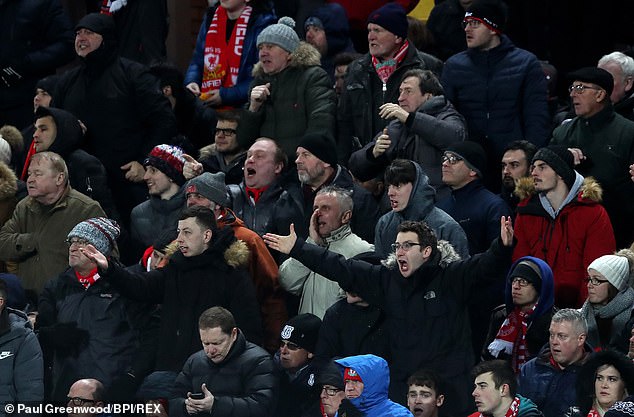 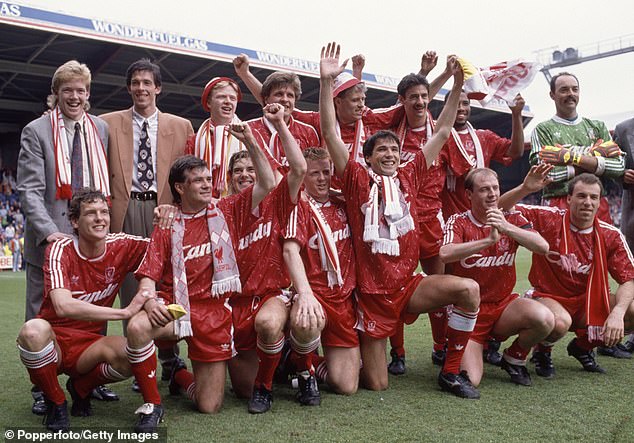 So omens mean little. The potential five-point gap they could open up on Monday night with a win against West Ham is not how they are viewing it. Instead, it is a fear that come Tuesday morning they could be just two clear of the Manchester City juggernaut.

To be fair to Liverpool, it must occasionally feel as though they are being chased by the T-1000. Sure, blows come in the form of defeats at Newcastle but then City reform and are back at their dangerous best come the weekend.

It does not help Liverpool that City played first this weekend and do so again in mid-week due to a game in-hand from the Carabao Cup final.

That means Jurgen Klopp’s side will likely go into their game at the weekend with their lead at the top already diminished, as they do on Monday. 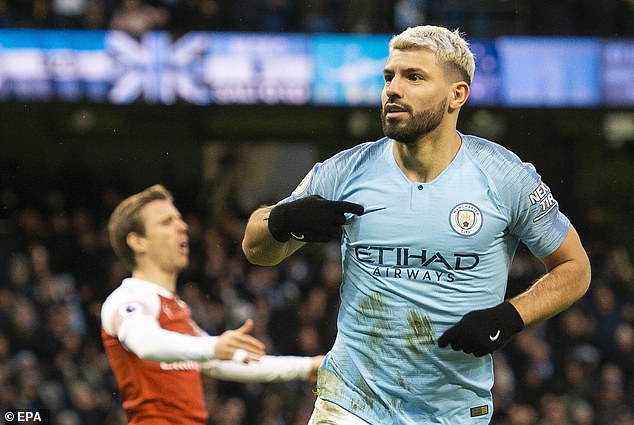 Rio Ferdinand believed there was a clear tension at Anfield when Liverpool took on and drew with Leicester.

‘The only slight worry I would have is I sense a nervousness and a team sitting there passing the buck at times,’ the former Manchester United defender said on BT Sport.

‘That is something (Jurgen) Klopp will have to address. You don’t want to see nerves at this stage, this is early.

‘I think they looked nervous, the crowd were nervous and it fed into the players.’ 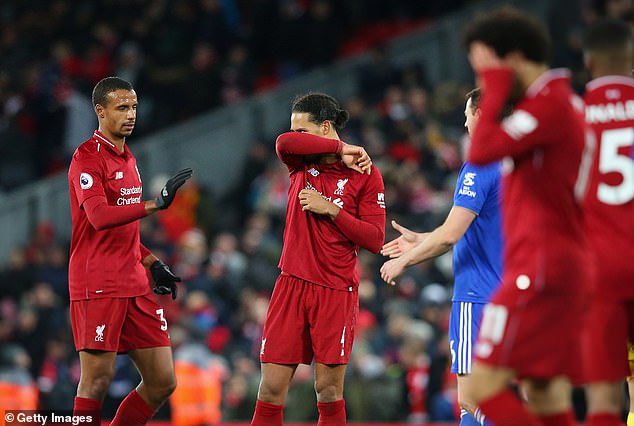 The problem is that everyone in the ground is desperate for this to come off. It is not the same as the other top clubs who have won titles in the last quarter of a century. All some adults stood on the Kop know in their lifetime is a desire to see a first league title held aloft.

In 2008-09, they led the league at Christmas but had dropped off by now after three draws in January. Amid all of that came Rafa Benitez’s facts rant, which, it must be remembered, came when Liverpool were top.

In 2013-14 they traded places with Manchester City and went into the home stretch with the title in their hands only to fall apart.

The pressure must have also played a part then. Fans started turning up at the training ground with banners calling on the team to ‘Make Us Dream’. 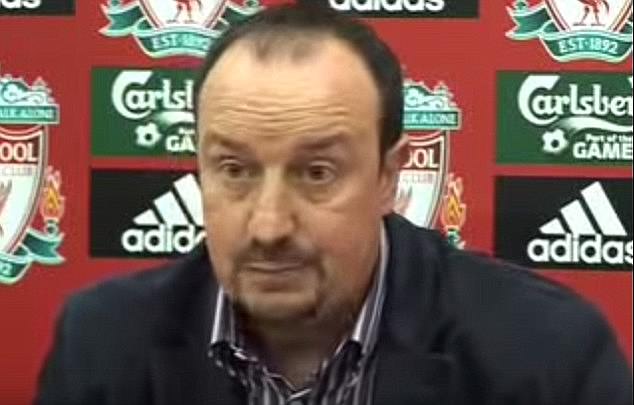 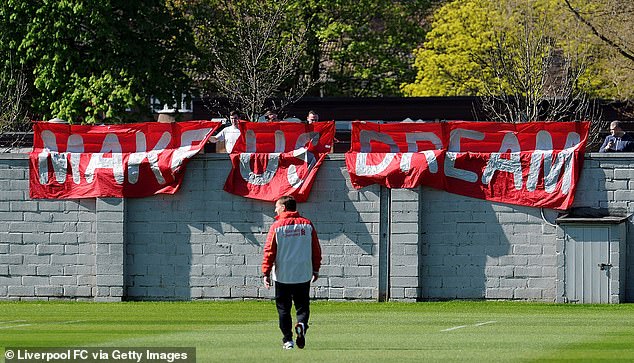 While pursuing the title in 2013-14, there was clear added pressure from the supporters

Yet Klopp seems to be thriving on the pressure and enjoy the sheer desire to win the Premier League among the fans.

‘There were a few discussions about the atmosphere in the last game but, since I am here, when we are 1-0 up, the people are not relaxed,’ Klopp told Sky Sports. ‘They think we can still concede, of course.

‘The atmosphere is completely fine, and it is our job to perform on the pitch and create atmosphere. Our crowd is always ready to step in and do their job – no doubt about that.

‘Everything is fine, but people understandably become a bit nervous in situations like that. That is normal. My experience at [Borussia] Dortmund was no different there. It’s not like they celebrate when you are 1-0 down. They pushed us on Wednesday.

‘Everything is like it should be but, of course, we haven’t won a title for 29 years, so it is normal that the people are not used to it. They really care about it and I like that fact.’ 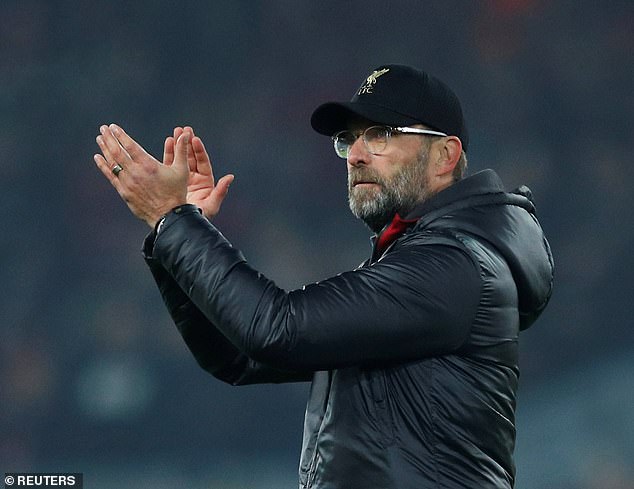 The manager is fine and has title winning experience from his time at Borussia Dortmund. There he had to compete with Bayern Munich, never an easy feat.

Now the question is whether this group of players also have the in-built strength to cope with the demands.

They lack experience of winning the league in England. Only James Milner has managed that.

Not that Ian Rush is concerned. ‘How do you get the experience if you haven’t won the title since 1990?’ he said. 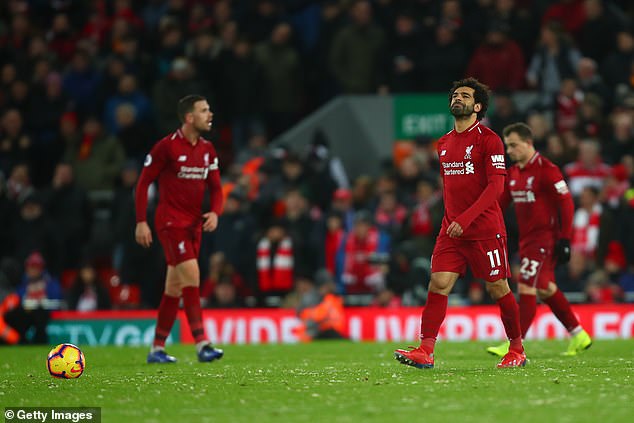 And he has backed Klopp to handle the situation: ‘A lot comes from how the manager and coaches keep the players’ feet on the ground.

‘I think supporters are quite right to be excited as they are in a position they haven’t been for a long time but players have to take each game as it comes.’

So while the tension is noticeable in the stands, the message from inside the club is even more clear. This team can do it. Now it is over to the London Stadium to see how they cope.

HOT OR NOT: Steve Smith showed his class in the Ashes while Nigel Benn return seems wishful thinking

Are electric bikes and scooters the future of transport? This is...

Unemployment Rate Fell to 13.3% in May

Grayscale Is Buying Up More Than Just Bitcoin

HOT OR NOT: Steve Smith showed his class in the Ashes...