Light pollution is helping to drive the so-called ‘insect apocalypse’, experts warn, contributing to fears that 40 per cent of all bug species will be lost within decades.

Artificial light at night can impact insects in various ways, from driving them elsewhere to changing their development and life cycles.

Declining insect numbers are having knock on effects to the global ecosystem — such as reducing North American bird numbers by 3 billion in the last 50 years.

The researchers note, however, that light pollution is — compared with other man-made environmental problems — relatively easy to address.

They encourage people to reduce their reliance on artificial lighting where possible and dim or filter outside light sources where not.

Light pollution is helping to drive the so-called ‘insect apocalypse’, experts warn, contributing to fears that 40 per cent of all bug species will be lost within decades (stock image)

HOW CAN WE HELP THE INSECTS?

The authors have a number of simple recommendations to help protect insects from light pollution:

The paper is the latest in a series drawing attention to the increasingly worrying plight of the world’s insect populations.

A 2017 study, for example, reported that flying insect numbers in 63 nature protection sites in Germany had decreased by 76 per cent in the preceding 27 years.

Furthermore, various studies have predicted that around 40 per cent of insect species could become extinct within the next few decades.

‘Light is the source of all life on this planet, a fundamental part of the perceptive ability of most animal taxa, and an environmental cue of time of day and year that has been constant throughout all of evolutionary history,’ the researchers wrote.

‘[Human-caused] changes to the natural light environment should be predicted to affect all life that has evolved within it — that is to say, almost all life on Earth.’

In their new paper, biologist Avalon Owens of the Tufts University in Massachusetts and colleagues synthesise the results of over 200 independent studies showing the myriad ways in which light pollution impacts the lives of insects across the globe.

‘Artificial light at night impacts nocturnal and diurnal insects through effects on development, movement, foraging, reproduction and predation risk,’ the researchers note in their paper.

Because of light pollution’s broad impact, it provides a threat that transcends individual insect species.

For example, experts believe that declining insect numbers are directly related to the loss of around 3 billion birds that feed on bugs in the US and Canada since 1970.

‘We also emphasise that artificial light at night is not merely a subcategory of urbanisation,’ the researchers added.

‘The ecological consequences of light pollution are not limited to urban and suburban centres, but widespread along roadways and around protected areas.’

HOW ARE DIFFERENT INSECTS AFFECTED BY LIGHT POLLUTION? 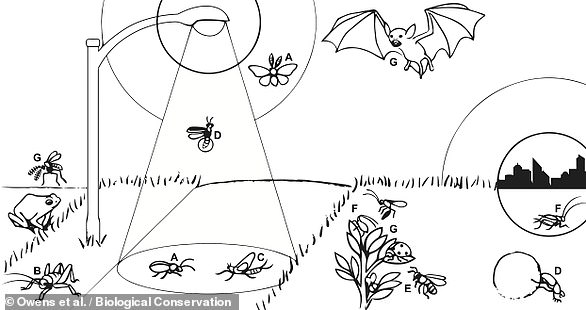 Artificial light at night can impact insects in various ways, from driving them elsewhere to changing their development and life cycles

A. Moths and beetles are fatally attracted to artificial light sources.

B. In contrast, some insects like weta avoid light, driving them away.

D.Natural light sources can be obscured by artificial lights. This prevents dung beetles from navigating by the stars and glowing insects like fireflies from attracting mates and warding off predators.

E. Daytime pollinators like bees end up extending their active hours later into the evening, while nocturnal insects are forced to emerge later.

F. Aphids and crickets suffer altered development and life cycles that are regulated by light.

G. These disturbed biological cycles eventually lead to mismatches among interconnected species and food webs, with cascading effects. Light can make certain insects easier for predators to spot and eat, as well.

‘Just as was the case for early climate change science, we have to take the Insect Apocalypse seriously,’ said the Zoological Lighting Institute’s James Karl Fischer.

‘If we really hope to prevent a terrible situation from getting worse, these issues should not be avoided.’

‘Insects are lynch-pins of the environment and necessary for other kinds of animals to survive; and a diversity of insects is crucial to maintaining our own food supply.’ 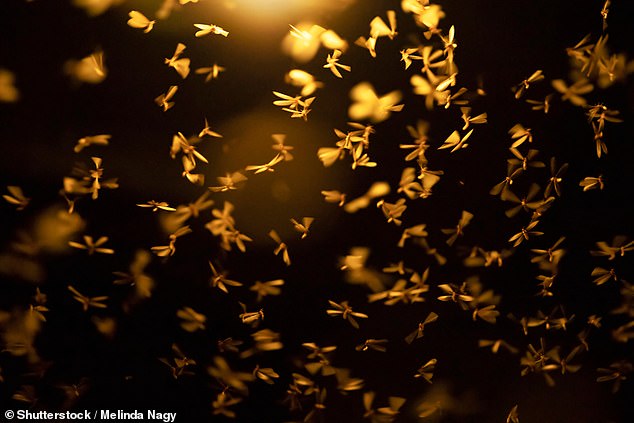 The authors have a number of simple recommendations to help protect insects from light pollution — beyond the obvious of turning off non-essential illumination.

Outdoor lights can also be shielded, filtered or dimmed, they note.

They also caution that certain monochromatic LED lights presently come with a number of environmental drawbacks — such as their potential for generating ultrasound emissions that can also disturb various insects. 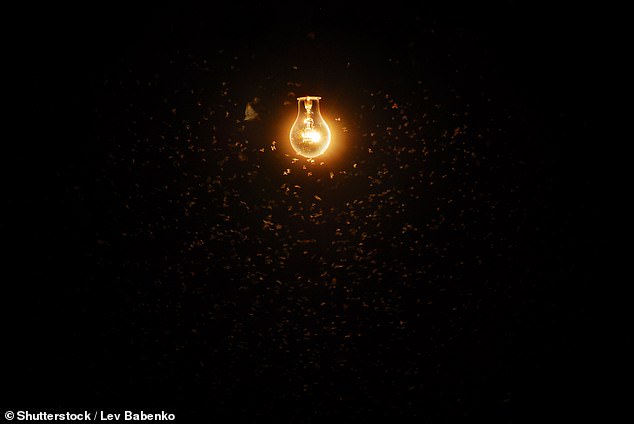 The researchers note, however, that light pollution is — compared with other man-made environmental problems — relatively easy to address

‘The amount of personal control we have here gives us a bit of hope,’ said Dr Fischer.

‘It is an easy matter to eliminate, reduce or change the ecologically devastating artificial lighting in and on our homes, schools, businesses if we want to, simply by turning off exterior lights.’

‘But we have to want to, and be willing to explore alternatives to the functions those lights currently serve.’

The full findings of the study were published in the journal Biological Conservation.

WHAT IS LIGHT POLLUTION?

Light pollution, also known as photopollution, is the presence of anthropogenic light in the night environment.

With more than nine million streetlamps and 27 million offices, factories, warehouses and homes in the UK, the quantity of light we cast into the sky is vast.

While some light escapes into space, the rest is scattered by molecules in the atmosphere making it difficult to see the stars against the night sky. What you see instead is ‘Skyglow’.

The increasing number of people living on earth and the corresponding increase in inappropriate and unshielded outdoor lighting has resulted in light pollution—a brightening night sky that has obliterated the stars for much of the world’s population.

Most people must travel far from home, away from the glow of artificial lighting, to experience the awe-inspiring expanse of the Milky Way as our ancestors once knew it.

Light pollution is excessive and inappropriate artificial light. While some light escapes into space, the rest is scattered by molecules in the atmosphere making it difficult to see the stars against the night sky. What you see instead is ‘Skyglow’

The negative effects of the loss of this inspirational natural resource might seem intangible.

But a growing body of evidence links the brightening night sky directly to measurable negative impacts on human health and immune function, on adverse behavioural changes in insect and animal populations, and on a decrease of both ambient quality and safety in our nighttime environment.

Astronomers were among the first to record the negative impacts of wasted lighting on scientific research, but for all of us, the adverse economic and environmental impacts of wasted energy are apparent in everything from the monthly electric bill to global warming.

US military attempting to deploy fish as underwater spies

Apple debuts ‘News+’ subscription service with over 300 magazine titles for...