Home buyers in London are benefitting from lower property prices, with the cost of flats falling the greatest amount compared to last year – dragged down by developers struggling to sell new-build apartments.

London flat prices were 4.3 per cent cheaper in June than the same month last year, according to official figures from the ONS / Land Registry index, with experts pointing to a lack of demand from buy-to-let investors as part of the cause.

Overall prices in London are down 2.7 per cent compared to a year ago, but this was largely due to the fall in flat prices, as all other property types in London fell 0.8 per cent or less.

While homes are cheaper in London, elsewhere in the UK they are still rising in price slightly. Across Britain, prices rose 0.7 per cent in the month of June to an average of £230,292 – up 0.9 per cent compared to June 2018.

The capital continues to act as a drag on the British property market, especially when it comes to flat prices. This isn’t surprising, as London accounts for around 30% of all flat sales

However, property analysts suggest the London market is picking up slightly, with the annual decline easing from 3.1 per cent in May and sales increasing as buyers take advantage of cheaper property.

Richard Donnell, research and insight director at Zoopla, said: ‘Whilst London remains at the epicentre of the drag on overall growth, annual price falls in London are more moderate than last month.

‘Signs of greater realism on pricing from sellers has resulted in a small but important increase in sales, but affordability and weak market sentiment are still the main constraints here.’

He added that the cooler London property market is starting to filter out and those in the commuter belt also need to be realistic on pricing to get properties sold.

‘Southern parts of the UK are clearly feeling the impact of London’s weaker growth rippling out, leading to annual house price falls in the South West and South East’, said Mr Donnell.

‘This has been driven by an imbalance between supply and demand, as growth in supply is running ahead of transaction levels.’

Some of the best discounts buyers can get in the London market are on new-build flats, where developers are trying to shift an oversupply of higher priced properties.

First-time buyers in London are getting the most off property compared to a year ago, with average prices paid by them down 3.4 per cent to £405,419 compared to a 1.8 per cent decline for those moving home to £531,937.

Tomer Aboody, director of property lender MT Finance, put the 4.3 per cent price drop down to less interest from buy-to-let landlords and first-time buyers, with the former being hit by stamp duty surcharges and the latter being put off by valuations.

He added: ‘Many of those buying flats will be single buyers and therefore will not benefit from two incomes going towards the mortgage.

‘Until stamp duty is addressed, making it more attractive for these people to buy, we are likely to see a glut of these properties unsold, with values suffering further.

The 2.7 per cent fall means property prices in the capital have failed to grow annually for 16 months in a row.

This compares with 15 months of prices falling over the year in London during the economic downturn of 2008 and 2009, but the decline has been much more moderate compared to the big double-digit annual drop a decade ago.

The data lags a month behind other indices, such as Halifax and Nationwide Building Society, but are based on home sales. 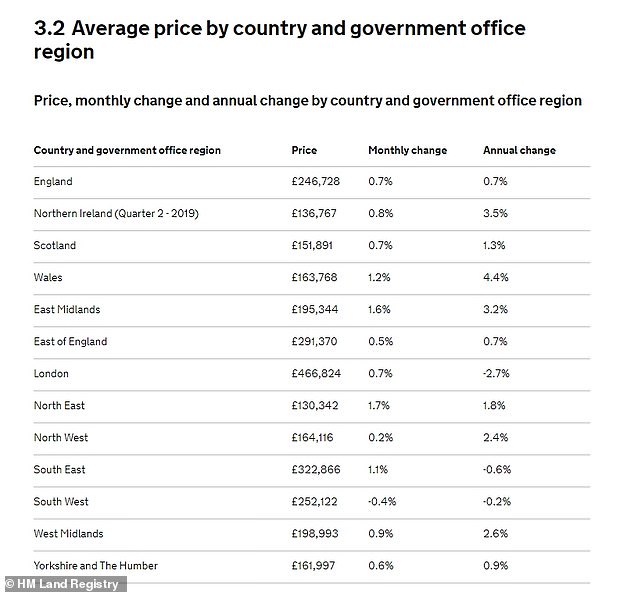 Wales and Northern Ireland saw the strongest house price growth over the last 12 months, while in England the East Midlands saw prices up 3.2% on last June

While the capital is in a slump, there were stronger growth figures from parts of the UK outside of the M25.

Prices in Wales are up 4.4 per cent annually and those in Northern Ireland climbed 3.5 per cent.

Within England itself, the East Midlands showed the strongest growth in prices with a rise of 3.2 per cent on last June’s property values.

Mark Harris, chief executive of mortgage broker SPF Private Clients, said: ‘It is steady as she goes for the housing market, which is no mean feat given that it is the summer months when things traditionally get quieter, and there remains the backdrop of Brexit uncertainty.

‘London is still creating a drag on average house price growth, with prices falling 2.7 per cent over the year to June.

However, this was an improvement on the May fall of 3.1 per cent, suggesting price falls could be slowing and the market stabilising.’ 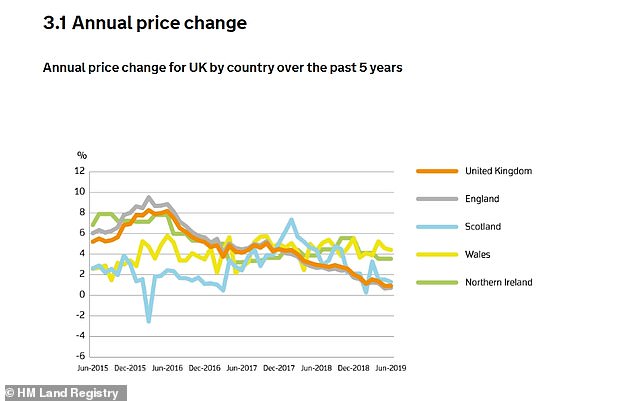 While the Land Registry did not split up flats in the rest of England compared to London, the capital’s 4.3 per cent year-on-year slump was enough to cause flat prices across the country to fall by 2.7 per cent.

London accounts for around 30 per cent of flat sales, according to the registry and is currently awash with new sky-rise developments being built.

All other property types in the UK saw their prices rise compared to last June. Detached houses rose 1.7 per cent and semi-detached ones rose 1.9 per cent.

As London dominates flat sales in the UK, it’s no surprise that the 4.3% fall in prices weighed on flat prices across the UK

Mike Scott, chief property analyst at estate agent Yopa, said: ‘Regions outside the South are seeing better growth, with the annual rate of growth as high as 4.4 per cent in Wales and all of these regions except Yorkshire & The Humber beating the national average.

‘In contrast, the four regions of southern England are all below the national average. London is still performing worst of all, with a fall over the year of 2.7 per cent, but the South East and South West also have falling prices.

‘These figures are based on completed house sales, so the prices will largely have been agreed earlier in the year.

‘However, more up-to-date reports from other sources confirm this trend, and we do not expect to see any significant change in the second half of the year, with continued slow growth in the national average price, but further modest falls in south-east England and London.’

How do the figures compare to the financial crisis?

The financial crisis, which unfolded in 2007, saw London property prices go into a tailspin.

According to historical Land Registry data, between July 2008 and September 2009, values plummeted substantially.

The latest set of data says that London property prices have now failed to grow for a longer period than those dark days for the capital’s property owners.

However, the falls have been less severe. Prices have failed to grow since the start of 2018, but the biggest annual fall has been the 3.1 per cent registered in May 2019

The main drag on property prices has been flats – detached, semi-detached and terraced homes were in positive growth territory until the start of the year and have fallen by 0.8 per cent or less annually, compared to the heavily falls when it comes to flats.

Auditors face clampdown after failing to flag up problems at bust...