A Labour MP today fought back tears while appearing on live TV to discuss his recent skin cancer diagnosis and treatment.

Chris Bryant, MP for Rhondda in Wales, was diagnosed with melanoma after his husband, Jared Cranney, noticed a mole on the back of his head after a haircut.

In an tear-jerking interview with Sky News this afternoon Mr Bryant, 57, called his partner a ‘star’ and said he now doesn’t feel ill ‘at all’.

He also revealed how strangers point at his scars on the train and how his diagnosis left him feeling ‘cold’ and convinced he would die.

Chris Bryant, Labour MP for Rhondda in Wales, revealed how he felt ‘cold’ and convinced he would die when he was diagnosed with skin cancer

Mr Bryant recently had the cancer removed from the back of his head and has been left with large scars on his scalp from the surgery.

In an interview with Sky journalist, Kay Burley, he revealed how his doctor, when examining it, told him the mole on his head was ‘quite thick’, and how he was filled with terror when told it was advanced cancer.

Just more than a week after his consultation he returned to the hospital – Prince Charles Hospital in Merthyr Tydfil – to get his test results.

‘This is one of the things I’d say to anybody,’ he said. ‘Take somebody with you when getting your test results.’

Mr Bryant said ‘you can’t hear yourself’ when you the doctor tells you the results, because of the shock – even if it’s good news.

He was told he had a Stage 3B melanoma, an advanced form of a cancer which typically grows on the skin but can spread to other parts of the body.

The disease affects around 13,500 people in the UK each year, and more than 2,000 people die of it annually, according to the NHS.

As Mr Bryant took a moment to compose himself, Ms Burley urged studio staff to get him a cup of tea. 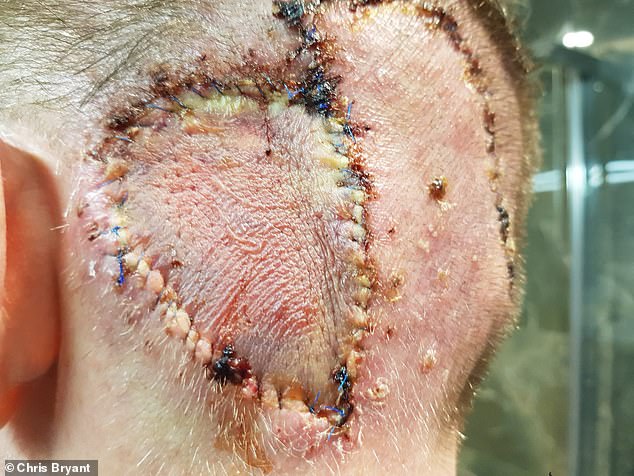 Mr Bryant needed part of his scalp removed and replaced with a skin graft. He said he was afraid the cancer would have spread throughout his body but further tests found it hadn’t 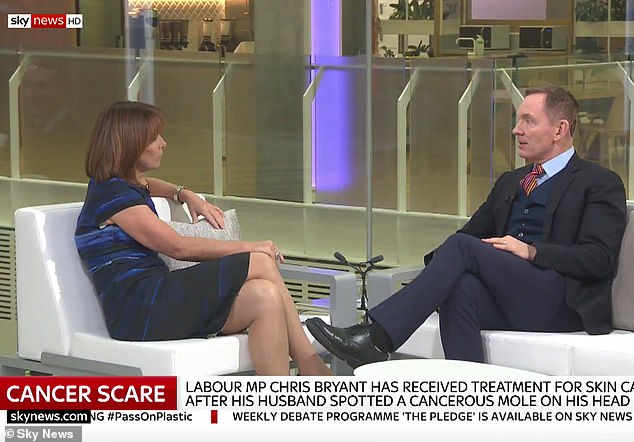 Mr Bryant fought back tears in the emotional interview as he told Sky News journalist, Kay Burley, about the impact his cancer diagnosis had on him and his partner, Jared Cranney

Mr Bryant then continued, saying ‘it feels like being punched in the stomach’.

He added: ‘I know I’m not anybody special, hundreds and hundreds of people go through this all the time. There will be people having this exactly today…

‘I have no choice [but to talk about it] because it’s so obvious. People point at me on the train, and I’ll be appearing in the next production of Frankenstein at the National without any makeup, but you do want to cry.

‘I felt cold in my skin for 48 hours. I slept terribly that night and I imagined everything – I was going to be dead by the end of the week, I was not going to make it to Easter.

‘Every single twinge in my body was another form of cancer and I was going to discover when I went for the next thing that I was riddled with it.’

He said the best advice he was given was ‘don’t use Dr Google’ because the information is out of date and would drive you to misery.

And, speaking of the day he was diagnosed he said a friend told him ‘tonight is going to be your worst night’, adding ‘it’s absolutely fine not to be strong’.

He also admitted how he told fellow MPs in Parliament on the day of his diagnosis because he was adamant he would be fine – but said they were fretting when they hadn’t heard from him after his appointment.

Medics removed the tumour on the back of Mr Bryant’s head and other specialists scanned the rest of his body, which was cancer-free, he said.

WHAT IS MELANOMA AND HOW CAN YOU PREVENT IT?

Melanoma is the most dangerous form of skin cancer. It happens after the DNA in skin cells is damaged (typically due to harmful UV rays) and then not repaired so it triggers mutations that can form malignant tumors.

The American Cancer Society estimates that more than 91,000 people will be diagnosed with melanoma in the US in 2018 and more than 9,000 are expected to die from it.

Around 15,900 new cases occur every year in the UK, with 2,285 Britons dying from the disease in 2016, according to Cancer Research UK statistics.

The patient can decide to use a skin graft if the surgery has left behind discoloration or an indent.

This is needed if the cancer reaches stage III or IV. That means that the cancerous cells have spread to the lymph nodes or other organs in the body.

Hair stylist horrified to find her arms and legs have been...

Social media is ‘putting millions of children’s lives at risk’