Kindness is new luxury, says Kurt Geiger boss…and giving up my salary is the least I can do

By Ruth Sunderland for the Daily Mail

Neil Clifford, chief executive of Kurt Geiger, has given up his £500,000-a-year pay until his stores open again after the coronavirus threat.

‘It’s a small sacrifice,’ the boss of the shoe company said. ‘It’s the only thing I could have done. I wanted to send a message to my staff that we are all in this together.

‘I probably earn 30 times more than one of our employees so I am super lucky and I didn’t feel I could go on drawing my salary at a time like this.’

Making a difference: Neil Clifford has given up his £500,000-a-year pay until his stores open again after the coronavirus threat

He has a new motto for the business in a time of pandemic: ‘Kindness is the new luxury.’ Immediately after closing his 55 UK stores on March 21, he decided to give away free shoes that would otherwise have been left unsold to NHS workers.

The idea came from his niece, Kerry Morrison, 36, who works as a speciality nurse in the Queen Alexandra Hospital in Portsmouth, Clifford’s home town.

‘We deliver a bag of electronic gift cards to every hospital in the cities we have stores. Each card is charged with £100 so you just go to the website and spend it.

‘This weekend we gave them to the Royal Free in Hampstead, north London. Once we have done every hospital we will go back to the beginning and we won’t stop until our stores reopen. We will also offer 50 per cent off everything in our stores until the end of the year if you work for the NHS. We are just trying to bring a bit of happiness and lightness. Everyone is doing their best, this country is amazing.’

Clifford, 52, has been a retailer all his life and never seen times as tough as this. He left school in the 1980s with one O-Level in art and started work on a youth training scheme in Debenhams in Portsmouth.

From those unpromising beginnings, he worked his way to the top via the Burton Group, before joining Kurt Geiger, then owned by the Fayed family, in 1995. A decade later, he embarked on a management buyout.

The business is now majority owned by private equity firm Cinven, which has a 79 per cent stake. Clifford and the rest of the management own 21 per cent. 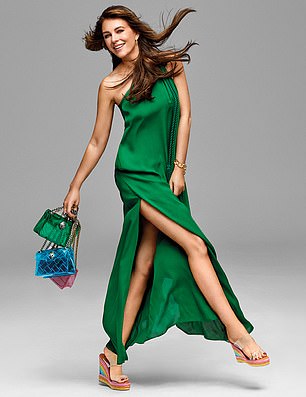 ‘Cinven have been incredibly supportive, which has given us the confidence to approach this crisis trying to be helpful to others. We bank with Lloyds and they are being very supportive too, they have been great.’

It helps that the company has halved its debts in the past three years, and is now carrying £50m of borrowings. And Clifford notes ruefully that before the crisis, Kurt Geiger, which employs 2,500 staff, had just celebrated a record year.

He is also urging his staff to join the NHS Volunteer Responders scheme, which is trying to recruit an ‘army’ of 250,000 to support those who will contract the virus by delivering medicines, helping people get to medical appointments, bringing them home from hospital and making regular calls on those isolating at home.

‘All of our employees are getting paid full salary. We want to turn our staff into the Kurt Geiger kindness squad.’

The nerve centre of the business is now Clifford’s home which he shares with his wife and three teenage children. Considering what things will be like post-pandemic, he says: ‘The world will be a more fragile place and everyone will have to be more generous and thoughtful.

‘I don’t think we are just going to go back to where we were, and people might not feel indulging themselves in designer goods is quite right for a while. It might come back slowly. But people are still going to need shoes.’

Next Wave of Coronavirus Stimulus Payments Hinges on Debate Over Reopening...