Her name may be Rio but unlike the subject of Duran Duran’s hit song of the same name, the new fourth-generation Kia Rio hatchback is enjoying a significant upgrade rather than a dance in the sand.

Her name is Rio and she’ll cost from 13 grand: Kia’s new supermini has been revealed ahead of its UK release at the end of the year when the

It aims to maximise fuel efficiency with electric torque assistance and regenerative braking.

Kia said: ‘The upgraded model features a range of enhancements to reinvigorate the car’s position within the highly competitive B-segment.’

‘EcoDynamics+ has been engineered to deliver greater efficiency from internal combustion engines on the road, seamlessly deploying and recuperating electric power.

‘The system supplements the engine’s torque output with power from a compact 48-volt lithium-ion polymer battery.’

The system switches seamlessly between ‘motor’ and ‘generator’ modes. In motor mode, under acceleration, it provides electric power assistance to reduce engine load and emissions.

As the car decelerates, it has the ability – under certain conditions – to switch to generator mode, recuperating energy from the crankshaft to recharge the battery. 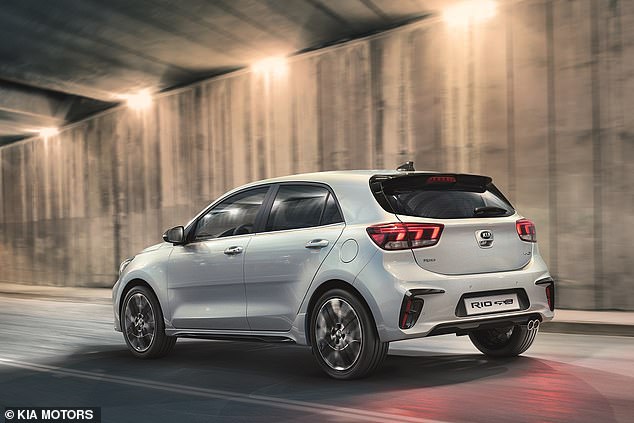 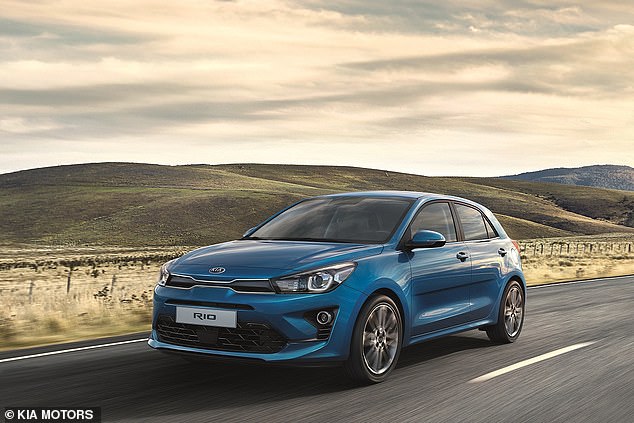 Motorists can select one of three different driving modes that adjust the responsiveness of the acceleration: Eco, Sport and Normal.

Kia says the new EcoDynamics+ powertrain reduces the Rio’s CO2 emissions by up to 11 per cent, though official performance figures won’t be announced until closer to the car going on sale. 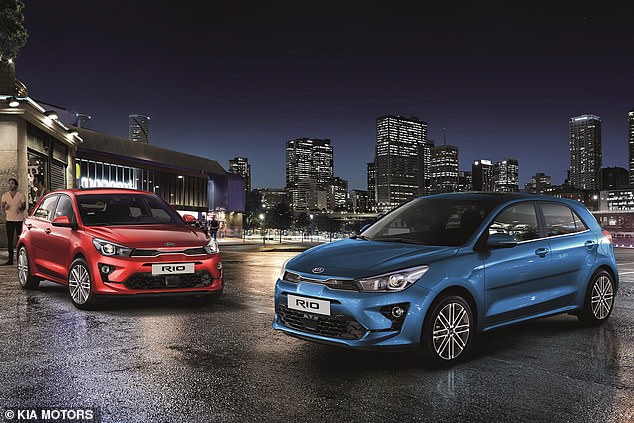 Two mild-hybrids will be available at launch along with a conventional 1.2-litre petrol 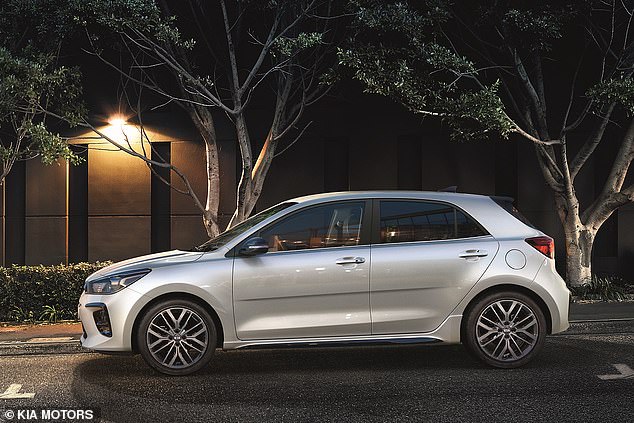 To cope with busy urban areas and jams, the Rio’s Idle Stop & Go system offers additional fuel savings by switching off the engine when both the brake and clutch pedal are depressed as the car comes to a halt. The engine then switches back on when both pedals are released and the car re-engages the driver’s selected gear.

It comes as standard with a range of electronic stability controls to help drivers remain in charge when cornering or braking, as well as driving in a straight line.

The Rio features an upgraded 8.0-inch touchscreen display with satellite navigation, and is one of the first Kia models in Europe to offer its ‘Phase II’ UVO Connect telematics system designed ‘to take the stress out of journeys’.

It features multi-connection Bluetooth allowing users to connect up to two mobile devices at the same time – one for hands-free phone and multimedia use, the other for media use only. 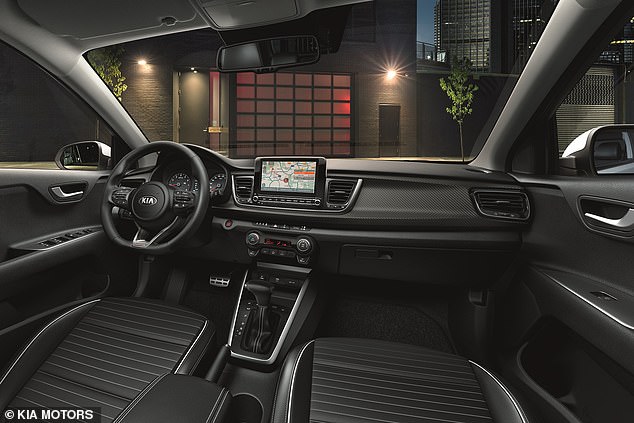 The car has access to live traffic information, weather forecasts, points of interest, fuel prices, and details of potential on- and off-street parking – including price, location and availability.

Depending on country, users can remotely send route directions to their car before a journey, check the location of their vehicle, and access vehicle reports and diagnostic notifications.

Kia said the new Rio with its ‘tiger-nose grille’ has been ‘subtly refreshed’ to present a ‘clean and classy’ exterior designed to exude ‘style and sportiness’ and ‘a tasteful and uncluttered appearance’.

At speeds below 112mph the car uses camera and radar sensors to maintain a safe distance from the car in front, while monitoring road markings to keep the Rio in the centre of its lane. It also features a rear cross-traffic collision-avoidance system and a rear occupant alert.

Also, if the car stops in heavy traffic or at a red light, a system alerts them if the car in front moves away without the driver noticing: ’This helps avoid the potential embarrassment of other impatient road users ‘reminding’ the driver to move off instead’, says Kia.

Additional safety benefits include six airbags throughout the cabin in total, as well as ISOFIX child-seat tether and anchor points. 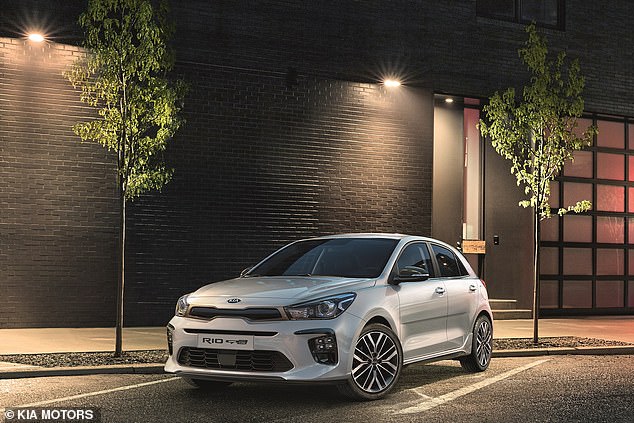 To cope with busy urban areas and jams, the Rio’s Idle Stop & Go system offers additional fuel savings by switching off the engine when both the brake and clutch pedal are depressed as the car comes to a halt 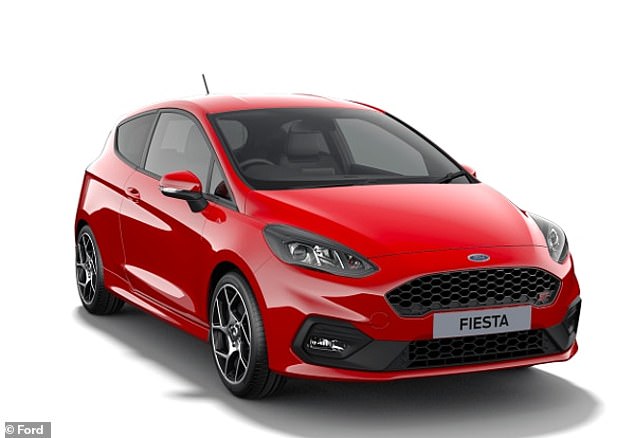 The Rio will go head-to-head with the Fiesta (pictured) when it arrives in the UK. The Ford has been the UK’s best-selling car for the last 11 years, with current prices starting from just under £16,000

‘We are convinced these upgrades will make the Rio more successful than ever.’

With prices starting around £13,000, it is likely to undercut its biggest direct rival –  Britain’s most-bought car, the incredibly popular Ford Fiesta.

Coronavirus drives Delta (DAL) to biggest loss in more than a...

Act now to plug your state pension contributions gaps before the...