Shamed Aston Villa star Jack Grealish has issued a grovelling apology after he was caught out partying at an ex-team-mate’s flat during the coronavirus lockdown.

The midfielder was left facing serious questions over his conduct after allegedly crashing his £70,000 Range Rover car into two other vehicles following a party at a luxury block of flats on Sunday.

However, he failed to mention that incident a video message posted to his social media accounts on Monday evening. Speaking to camera, Grealish said: ‘Hi everybody. I just want to do a quick video message about how deeply embarrassed I am by everything that has happened this weekend. 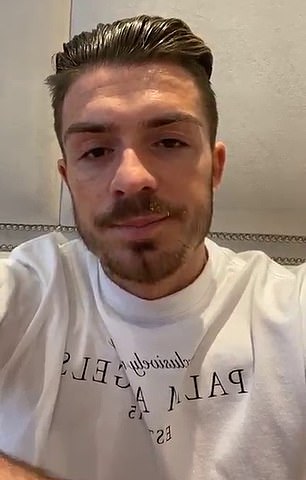 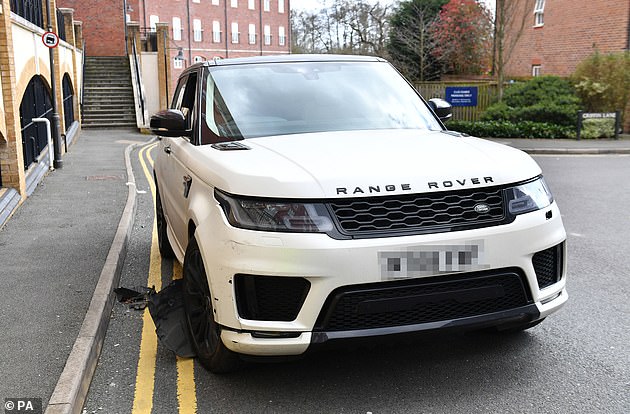 Grealish is pictured walking away, close to the scene of a Range Rover crash on Sunday morning in a Birmingham suburb

‘I know it is a tough time for everyone at the moment being locked in doors for so long and I got a call off a friend asking to go round to his.

‘I stupidly agreed to do so. I don’t want anyone to make the same mistake that I did so I urge everyone to stay at home and follow the rules and guidelines that we have been asked to.

‘I know for a fact I’ll be doing that in the near future now. Obviously, I urge everybody to do the same.

‘I hope everyone can accept my apology and we can move on from this and in the near future we can be out enjoying ourselves again once this has all boiled over.’

The Aston Villa captain, who earns £45,000 a week, was photographed coming out of an estate in the suburbs of Birmingham shortly before police arrived on Sunday. 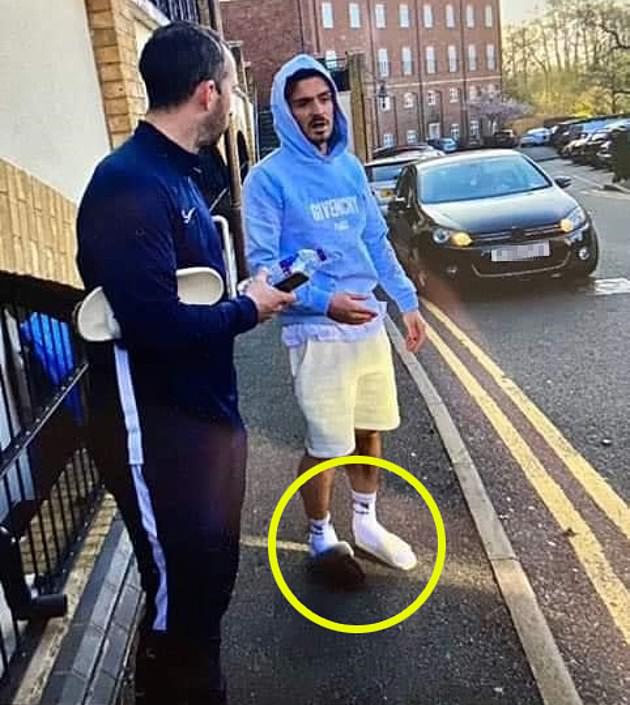 An image of a man resembling Grealish, wearing odd footwear, circulated on social media, claiming he was near the incident 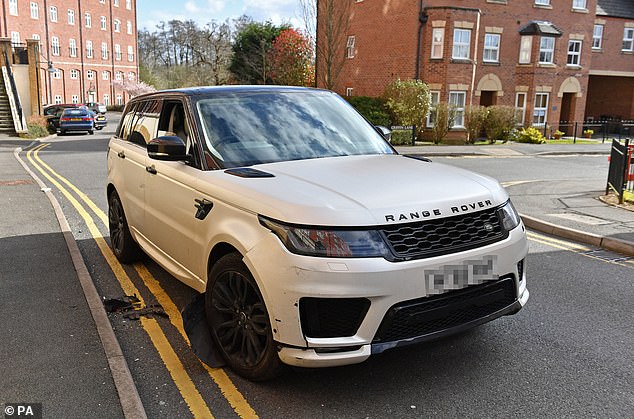 Grealish, 24, was seen leaving Dickens Heath, close to a luxury flat owned by former team-mate Ross McCormack, with an unzipped backpack and a sky-blue hoodie.

The crash in the early hours of Sunday morning near Solihull came shortly after the midfielder had warned people to ‘stay at home’ during the coronavirus crisis.

A witness told MailOnline: ‘They went to collect their possessions before leaving the scene before the police arrived. We were watching and my partner saw them leaving the building and head off down the road quickly.’

The midfielder has previously been seen arriving at the Aston Villa training ground in a similar white Range Rover.

Aston Villa also issued a statement on Monday evening to announce that Grealish had been fined for his poor behaviour, with the money going to charity. 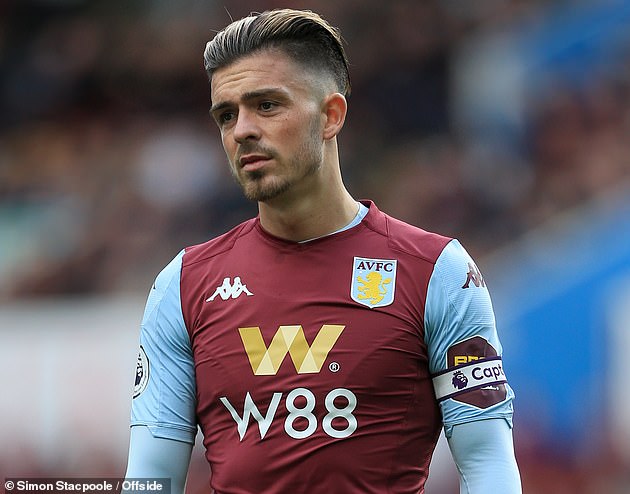 ‘Club captain Jack Grealish has accepted that his decision to leave his house was wrong and entirely unnecessary,’ the club said in a statement.

‘It breached the government guidelines which are clear and should be adhered to by everybody.

‘The player will be disciplined and fined with the proceeds donated to The University Hospitals Charity in Birmingham.’

Grealish was pictured with former Leeds United player Tony Capaldi, a former team-mate of McCormack’s at Cardiff City, with locals claiming they had attended a party at McCormack’s house on Saturday night.

A witness told MailOnline: ‘We live near the estate he stayed partying overnight, his car was parked in the street all night.

‘The commotion outside when he was hitting cars was tremendous, and the estate security guard saw him reverse into a van and hit a Mercedes causing significant damage to all cars.’ 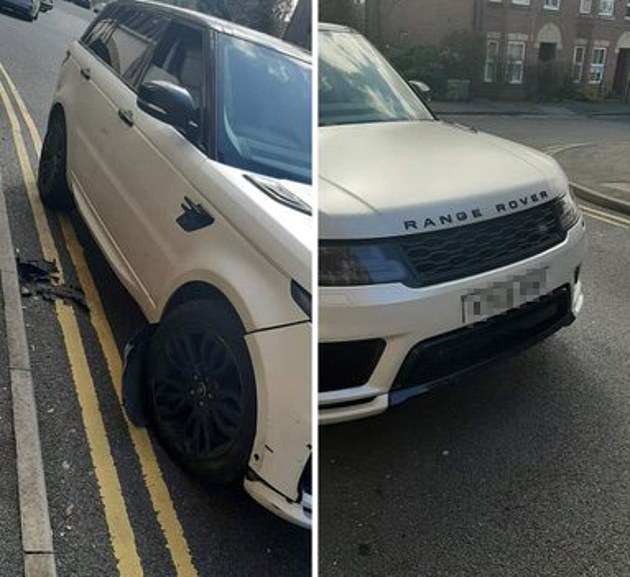 A neighbour told The Sun:  ‘The party had been going on all night. It was unbearable. The noise had only stopped a short while when, just after 8am, there were a series of almighty collisions which reverberated through the flats.

‘Outside, Jack Grealish was stood next to his car rowing with a security guard. It was strange to see an England ace looking so unkempt and dishevelled. He looked unsteady and confused.’

A West Midlands Police spokesman said: ‘We were called to Waterside, Dickens Heath, just before 10am yesterday (March 29) to reports that a Range Rover had crashed into two parked cars in the street.

‘The driver left his details with a member of the public at the scene before leaving on foot.

‘Arrangements have now been made to obtain more details around the circumstances of the collision from the driver.

‘Anyone with information has been asked to get in touch, via Live Chat at west-midlands.police.uk quoting log 643 of March 29.’

Current government advice during the coronavirus crisis states that citizens should leave their homes only to shop for basic necessities, to exercise once a day, for any medical need, or travelling to work if they cannot work from home. 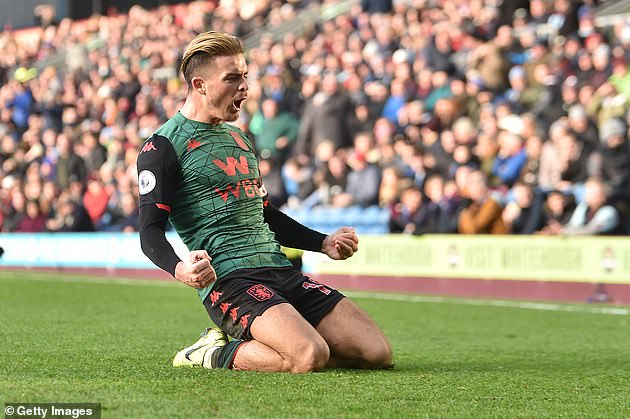 On Saturday, Grealish appeared to echo that advice as he posted a video for his Twitter followers pleading with them to stay at home.

‘To help save lives, you must stay at home,’ he said.

‘Only leave your house to buy food, buy medicine or for exercise and always remember to stay at least two metres apart. This is urgent. Protect the NHS. Stay home. Save lives.’

As with the rest of the Premier League, Villa’s players are currently following fitness programmes at home, with their Bodymoor Heath training ground closed.

Grealish joined his boyhood club at the age of six and has worked his way up the ranks to become a key player for the Midlands outfit. He is a target for Manchester United after enjoying a fine season with Villa.

‘He had a lot to say last week,’ the Good Morning Britain presenter said, talking about the 24-year-old’s social media post. 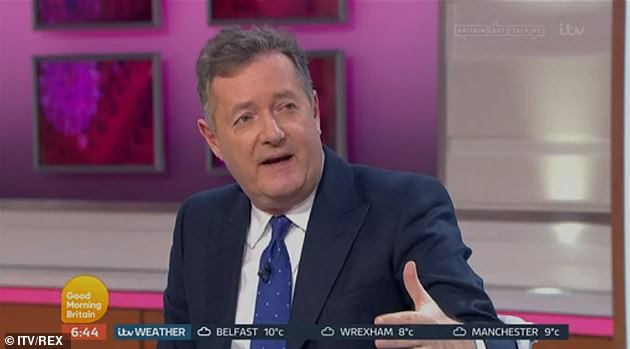 ‘It was really good until you go to your mates. What are you thinking to Jack? What happened to being sensible.

‘It doesn’t help when an England star, a role model, breaks the rules. Shame on you.’

Former Tottenham and Portsmouth manager Harry Redknapp, also speaking on the ITV programme, said: ‘I have been his biggest fan. Every time I talk about him I say he should be in the England team.

‘If I was a manager of the big teams I would buy him up. But this is no excuse. This is absolutely stupid. I can’t believe what he has done, he needs to be punished for sure.’

This Eerily Accurate Fractal Predicts Bitcoin Will Rocket to $20,000 in...

Hundreds of bats drop dead across India as they fall out...