Twitter has some good news for users who may be embarrassed by old tweets.

Speaking at a Goldman Sachs event, CEO Jack Dorsey said he’s considering rolling out a feature that would let users ‘clarify’ tweets that have already been published.

It comes as users have been clamoring for several years to get Twitter to introduce an edit button. 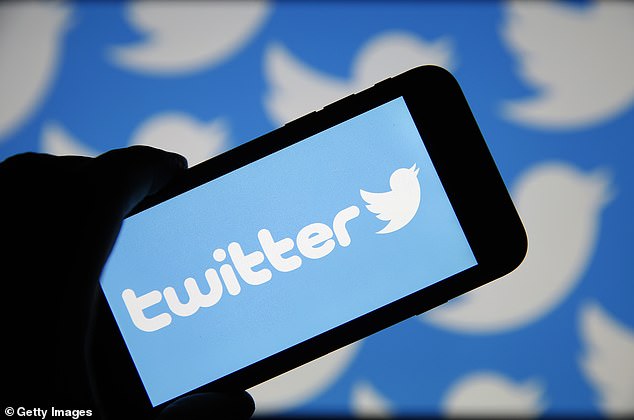 Speaking at a Goldman Sachs event, Twitter CEO Jack Dorsey said he’s considering rolling out a feature that would let users ‘clarify’ tweets that have already been published

One would give users a brief window of time after the post was sent – five minutes, for example – to make any corrections.

The other would work in a similar way to Facebook’s editing feature, allowing allows users to amend what they wrote at any time, but with a log of the changes visible.

This could prevent people’s tweets from being misconstrued or if they publish a tweet, only to realize it’s missing important details, they could add it in later on.

There’s currently no way to edit tweets; if you make a mistake, your only options are to delete the whole post, or stick with the error.

‘The other thing that we’re seeing more broadly within the culture right now in this particular moment is people quote-unquote ‘being cancelled’ because of past things they’ve said on Twitter or various other places in social media,’ Dorsey said at the Goldman Sachs event, according to Recode.

‘There’s no credible way to kind of go back and clarify or even have a conversation to show the learning and the transition since.’

Users can already add additional context to a tweet by using the quote tweet tool, but for some, it may not be enough. 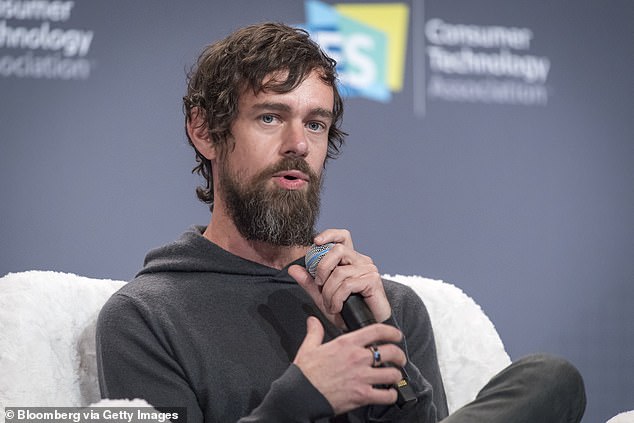 A clarification tool would let people add clarifications or annotations to old tweets, Twitter CEO Jack Dorsey (pictured) explained. However, he didn’t confirm if this feature is in the works

Letting users clarify a tweet could solve that problem.

A Twitter spokesperson told Recode that if the company decides to test this tool, it would first be trialed among journalists first.

It could prove to be a helpful tool, especially in the case of a breaking news alert, wherein more details emerge and previously tweeted information is false or misleading. 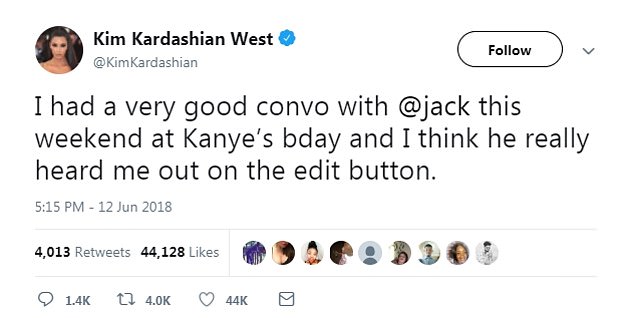 Kim KardashianWest asked Dorsey in person about adding a like button at her husband Kanye West’s birthday party. ‘Now I see why I was invited!’, Dorsey jokingly replied to her tweet

Additionally, people in the spotlight, such as celebrities and other famous figures, could clarify old tweets.

This issue rose to the forefront with comedian Kevin Hart, who lost out on hosting the 2019 Academy Awards after homophobic tweets from 2011 resurfaced.

The possibility of an edit button has been widely discussed – and even Kim Kardashian asked Dorsey in person about it at her husband Kanye West’s birthday party.

Kardashian West said she spoke with Dorsey at husband Kanye West’s birthday bash. ‘I had a very good convo with @jack this weekend at Kanye’s bday and I think he really heard me out on the edit button,’ she wrote to her 60 million Twitter followers.

In response to her tweet, Dorsey replied, ‘Now I see why I was invited!’

Users have been requesting the ability to edit tweets virtually since Twitter’s birth.

The social media giant said it’s in the ‘early stages’ of considering whether or not to remove the like button, which appears as a heart icon, as part of an overall redesign of the platform.

It comes after CEO Jack Dorsey reportedly said at an event last week that he would get rid of the heart-shaped button ‘soon,’ according to the Telegraph.

But Twitter said the change may not be coming as soon as users think.

‘As we’ve been saying for a while, we are rethinking everything about the service to ensure we are incentivizing healthy conversation, that includes the like button,’ Twitter’s communications unit said in a tweet.

‘We are in the early stages of the work and have no plans to share right now.’

At the WIRED25 summit this month, Dorsey further detailed his thoughts on the like feature, saying he was unhappy with the ‘big like button with the heart on it.’

Dorsey stopped short of saying the firm would remove the feature, however.

Some have noted that Twitter may get rid of the like button and, in its place, emphasize the ‘Bookmark’ feature rolled out earlier this year.

Lakers’ LeBron James has message for haters: ‘Do me one favor...