As a television reporter, there is nothing like a live broadcast to keep you on your toes. After all, things can – and often do – go wrong.

So I could be forgiven for feeling a little bit pleased with myself that, until April 2017, I had managed to get through thousands of live reports with little incident.

Pride comes before a fall, as they say: almost literally, in my case. While reporting from a major incident in Westminster, I seized up, started repeating myself and talking gibberish, and quickly lost the ability to talk altogether. 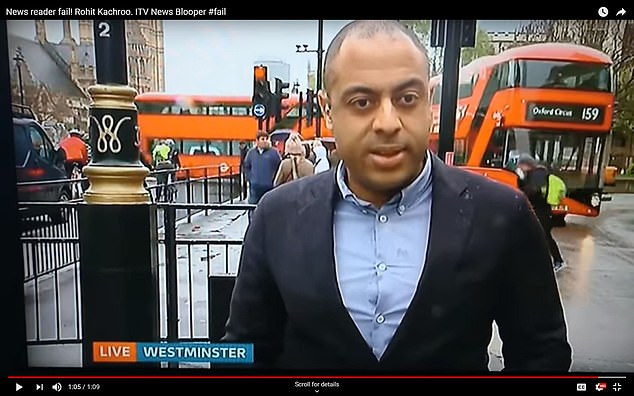 Apparent ‘blooper fail’: What they and the four million viewers didn’t know was that I had been living with the blood sugar condition type 1 diabetes for a decade, and my ‘fail’ was the result of the illness

Mary Nightingale, the news presenter back in the studio, clearly sensed something was wrong and quickly cut my report short.

Now, if you search my name on YouTube, you can see it yourself: the clips are labelled ‘News reader fail!’ and, even less sympathetically, ‘ITV Reporter Brain Farts Live’, and come complete with audible laughter from whoever was recording.

On Twitter, it was described as a ‘cringeworthy malfunction on camera’. Another Twitter user helpfully suggested I had been ‘possessed by some kind of spirit’.

But what they and the four million viewers didn’t know was that I had been living with the blood sugar condition type 1 diabetes for a decade, and my ‘fail’ was the result of the illness.

I knew I wasn’t feeling great as I raced from my office in Central London to Whitehall, where a man carrying a bag of knives had been arrested on suspicion of plotting a terror attack. As the ITV News Security Editor, my job was to get to the scene as quickly as possible.

But in the adrenaline-fuelled rush of the breaking story, I managed to ignore the warning signs that I was becoming hypoglycaemic – the term for dangerously low blood sugar levels, usually called a hypo. 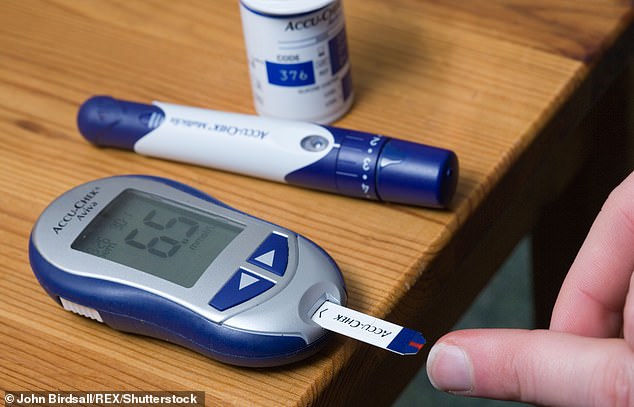 Type 1 diabetes occurs when the immune system attacks and destroys the insulin-producing cells in the pancreas. Insulin is a hormone vital for moving glucose from carbohydrates in food out of the bloodstream and into the body’s cells, where it is used for energy (file image shows a diabetes monitor)

The studio cut to me live and after a couple of just-coherent opening sentences, I began to slow down – fast. After a few ‘ums’ and ‘ers’, I started to repeat myself, blurting out random words and only vaguely relevant phrases.

Then suddenly, I just ran out of energy and stopped talking.

I muttered a final ‘Hello?’ down the camera lens and the live link was cut just as I felt myself slipping out of consciousness. If it hadn’t been for the swift action of colleagues, things could have been far worse than embarrassing.

Ever since I was diagnosed with type 1 diabetes in 2006, aged 24, after a visit to the doctor following unexplained weight loss, thirst and tiredness, it’s been difficult combining an unpredictable job with an unpredictable condition.

Type 1 diabetes occurs when the immune system attacks and destroys the insulin-producing cells in the pancreas. 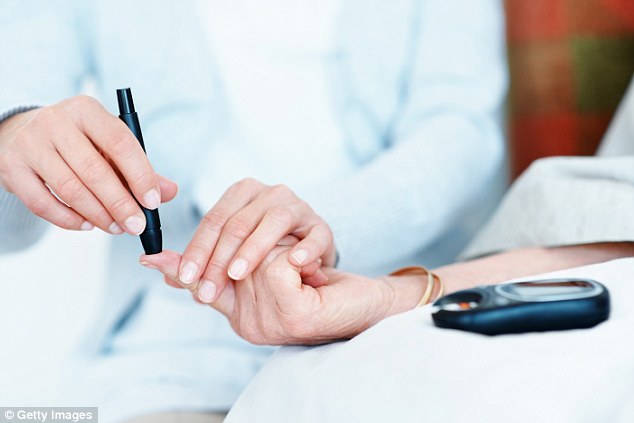 Sustained high blood sugar can lead to blindness and damage to nerves and limbs. But low blood sugar, caused by taking too much insulin, can trigger a hypo. The treatment in all cases? Immediately consuming something very sugary, such as a soft drink, sweets or a glucose table

Insulin is a hormone vital for moving glucose from carbohydrates in food out of the bloodstream and into the body’s cells, where it is used for energy.

Because we type 1 diabetics don’t produce our own insulin, we have to inject a synthetic version every day to keep our blood sugar levels under control.

Managing sugar levels is a daily tightrope balance between the long-term risks of high blood sugar and the immediate dangers of it sinking too low.

Sustained high blood sugar can lead to blindness and damage to nerves and limbs. But low blood sugar, caused by taking too much insulin, can trigger a hypo.

The treatment in all cases? Immediately consuming something very sugary, such as a soft drink, sweets or a glucose tablet.

Most people have heard of type 2 diabetes – it’s become something of a modern-day epidemic.

Fatty foods, excess alcohol and a couch-potato lifestyle all increase the risk of developing the condition by disrupting the body’s use of insulin – the hormone that helps us burn up glucose (a sugar) from foods. Without it, glucose accumulates in the blood, damaging nerves, blood vessels and vital organs.

More than four million Britons have type 2 diabetes and another 12 million people are at risk. It can usually be controlled with tablets and, in some cases, reversed by weight loss.

Type 1 diabetes is caused by the immune system attacking insulin-producing cells in the pancreas. Most of Britain’s 400,000 sufferers must inject insulin daily to avoid dangerously high blood sugar levels.

At Westminster, my colleagues who knew I had diabetes offered me fizzy drinks and chocolate. Three minutes and one can of cola later, I was back to normal.

If untreated, however, hypos can lead to unconsciousness, irreversible brain damage and even death.

Many news correspondents are used to grabbing a passport and a change of clothes to respond to a breaking news event, especially when reporting from war zones or natural disasters.

But my must-haves include ten cartridges of two types of insulin, 50 needles, two insulin pens, a blood-testing machine, a device to pierce my skin, dozens of testing strips to measure my blood glucose levels, and several packets of something very sweet.

Of course, some type 1 diabetics have far more challenging jobs. Theresa May was in her 50s when she was diagnosed. Unlike me, the Prime Minister wears a diabetes patch on her arm the size of a £2 coin which constantly monitors her glucose levels, reducing the need for finger-prick blood tests. Now I’m warming to the idea of anything that might help prevent another on-air hypo.

The slurred words and vacant expression caused by hypoglycaemia can falsely give the impression that someone having a hypo is drunk. That means many diabetics who find themselves in danger and in need of urgent help are dismissed by strangers.

That’s a worry when you remember that there are 400,000 people in the UK with type 1 diabetes, including around 30,000 children.

Although for some, my hypo is merely an amusing TV ‘blooper’, it is a real reminder that type 1 diabetes is a serious illness that people need to be aware of as it can have deadly consequences.

Thousands of Britons could be saved from open heart surgery by...

Mother has an orange-sized cyst on her head drained by Dr...