Astronauts began an extraordinarily complicated series of spacewalks Friday to fix a cosmic ray detector at the International Space Station.

It took them nearly two hours to get to the instrument and start removing a protective shield, one fastener at a time, to gain access inside.

NASA considers these spacewalks the most difficult since the Hubble Space Telescope repairs a few decades ago. Unlike Hubble, the spectrometer was never meant to undergo space surgery. After eight years in orbit, its cooling system is almost dead.

In some respects, this work, 250 miles (400 kilometers) up, is even trickier than the Hubble spacewalks, said NASA project manager Ken Bollweg. As before, the stakes are high. 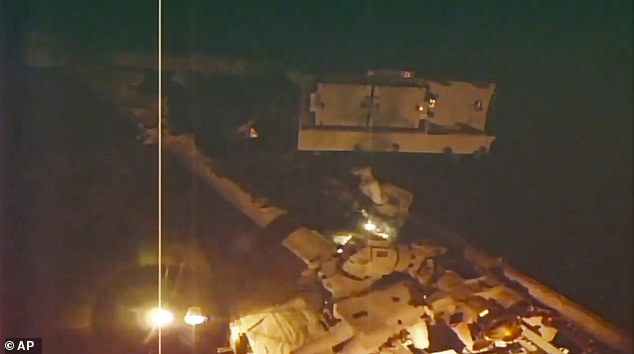 The astronauts ventured out with dozens of tools and four new pumps for the Alpha Magnetic Spectrometer. NASA considers these spacewalks the most difficult since the Hubble Space Telescope repairs a few decades ago

Mr Bollweg said: ‘Any time you do heart surgery you’re taking some risks.’

Parmitano and Morgan will go out at least four times this month and next to revitalize the instrument. 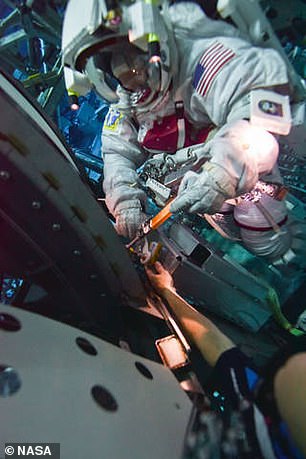 Tests being conducted in the Neutral Buoyancy Laboratory (NBL) pool as part of the Alpha Magnetic Spectrometer (AMS) Repair training and planning. Fasteners are being removed as part of the Debris shield Removal Task

Delivered to orbit by Endeavour in 2011 on the next-to-last space shuttle flight, the $2 billion spectrometer is hunting for elusive antimatter and dark matter.

That’s more than what was collected in over a century by high-altitude balloons and small satellites, said lead scientist Samuel Ting, a Nobel laureate at the Massachusetts Institute of Technology.

He monitored Friday’s spacewalk from Mission Control in Houston.

The huge spectrometer – 16 feet by 13 feet by ten feet (five meters by four meters by three meters), with a mass of seven tons (6,800 kilograms) – was designed to operate for three years.

By installing four new and improved coolant pumps, the astronauts can keep it working throughout the life of the space station, or another five to 10 years.

The replacement pumps arrived at the space station nearly two weeks ago, along with an assortment of new tools.

Parmitano and Morgan first arrived at the International Space Station on his ‘Beyond’ mission in July, as part of Expedition 60. 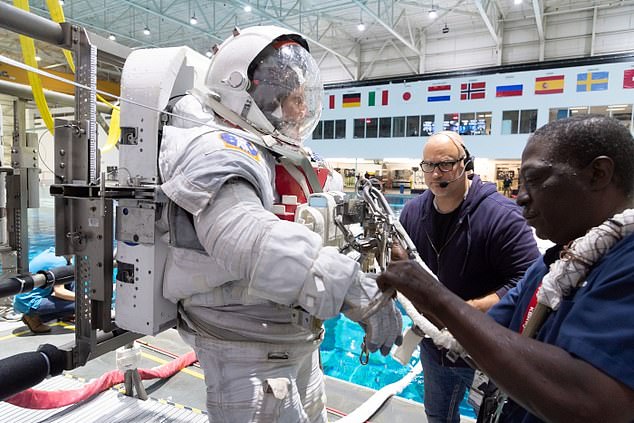 Along with Russian cosmonaut Alexander Skvortsov the crew mates travelled for six hours in their Soyuz MS-13 spacecraft to reach the ISS.

They were launched from the Baikonur Cosmodrome, Kazakhstan, on 20 July and docked at the station the next day.

Parmitano, the lead spacewalker, and Morgan trained extensively for the plumbing job before rocketing into orbit. Friday’s task entailed removing the shield and tossing it overboard. 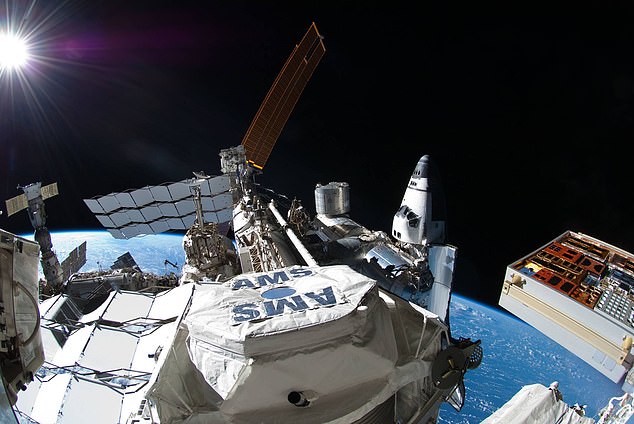 This picture, photographed during the spacewalk conducted on July 12, 2011, shows the International Space Station with space shuttle Atlantis docked at right. In the center foreground is the Alpha Magnetic Spectrometer experiment installed during the STS-134 mission 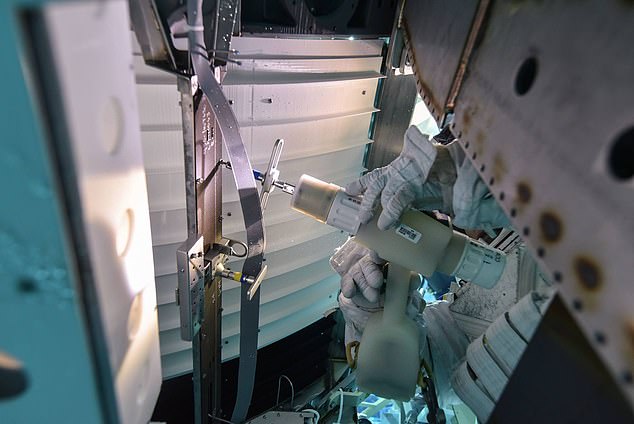 Tests being conducted in the Neutral Buoyancy Laboratory (NBL) pool as part of the Alpha Magnetic Spectrometer (AMS) Repair training. Activity being performed here is the removal of the fasteners for the Cover Removal Task on the Vertical Support Beam.

The next spacewalk will involve slicing through stainless steel tubes and splicing in connections for the new pumps, which like the old will use liquid carbon dioxide as the coolant.

Morgan is an emergency physician in the Army – a bonus for this kind of intricate work. He’s making his first spaceflight.

For second-time station resident Parmitano, it marked his return to spacewalking following a close call in 2013. He almost drowned when his helmet flooded with water from the cooling system of his spacesuit. Unable to talk because of the rising water, he managed to keep his cool as he made his way back to the safe confines of the space station.

Who are the astronauts carrying out the spacewalks? 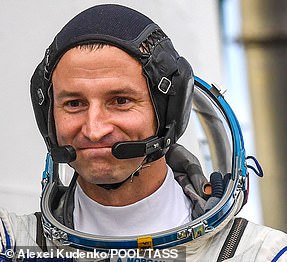 Dr. Morgan is an emergency physician in the U.S. Army with sub-specialty certification in primary care sports medicine.

He is a graduate of the US Military Academy at West Point, NY and the Uniformed Services University of the Health Sciences in Bethesda, MD.

Prior to his selection to NASA’s 21group of astronauts, Dr. Morgan served in elite special operations units worldwide.

He is married with four children who live in New Castle, Pennsylvania.

He is currently serving aboard the International Space Station as a flight engineer for Expedition 60, 61 and 62. 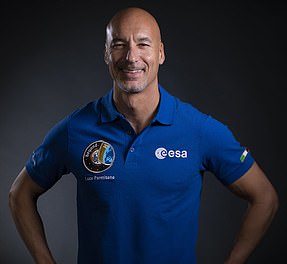 Born in Paternò (although he considers Catania to be his hometown) Italy, on 27 September 1976 Luca Parmitano is married with two daughters.

Other interests include snowboarding, scuba diving and reading as well as listening to and playing music.

In 1999, he completed a bachelor’s degree in political sciences at the University of Naples Federico II, Italy, with a thesis on international law.

In 2000, he graduated from the Italian Air Force Academy, in Pozzuoli, Italy.

Luca was promoted to the role of Colonel in the Italian Air Force ahead of his Beyond mission in 2019.

Luca was selected as an ESA astronaut in May 2009. 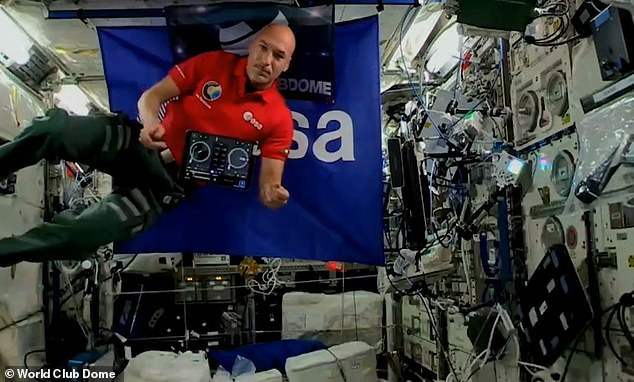 World first: In August Parmitano became the first to play a DJ set in space. According to the European Space Agency, the 42-year-old used music ‘to connect across cultures’ and illustrate the advances in space technology

Ripple (XRP) Showing Signs of Weakness But $0.25 Holds The Key