Apple’s new ‘budget’ iPhone: $699 iPhone 11 and comes with ultra-wide camera and the ‘fastest chip ever in a smartphone’

Apple unveiled the next generation of iPhone on Tuesday, including a slightly more affordable base model that comes with a new camera, chip, and the fastest performance to date.

The iPhone 11, which costs $699, will be available for pre-order starting September 13 and will hit stores beginning Friday, September 20.

Among the standout features is a new ultra-wide lens added to the phone’s rear-facing camera module.

The new camera boasts a 120 degree field of view, and allows users to take pictures with a greater depth of field and range.

THE IPHONE 11 AT A GLANCE

Apple’s new iPhone 11 boasts several improvements over its predecessor, including:

– A new chip. The A13 Bionic is faster and more efficient, allowing for an hour more battery life over the iPhone XR.

According to Apple, that larger range enables the phone to captured four times more scene.

This will be particularly useful for landscape shots, the firm says, and is ‘great for short spaces where you can’t back up.’

Its Ultra-Wide lens is powered through a new software that lets users cycle between regular and wide modes seamlessly, broadening their image field by simply swiping.

A wider sensor also enables the phone to capture more light and paves the way for a long-desired Night Mode setting for low light.

It also achieves 2x optical zoom and an ‘immersive camera interface,’ that will let users ‘see and capture the area outside of the frame.’

Like the more expensive Pro models also release on Tuesday, the iPhone 11 uses machine learning to get the most out of its image processing abilities, and features multi-scale tone mapping and portrait lighting effects.

All three cameras on the phone, including a front-facing lens, are 12-megapixels and capable of capturing 4K video.

Notably, Apple has added slow motion capabilities to its front-facing lens, which can record videos at 60 frames per second.

To help process the phone’s clearer and larger images and help handle high-resolution gaming on Apple’s new gaming service, Apple Arcade, the phone will leverage a new A13 Bionic chip, which Apple says is the ‘fastest CPU ever in a smartphone.’

‘iPhone 11 is the next generation of iPhone, packed with great new capabilities in an incredible design, including new Ultra Wide and Wide cameras for gorgeous videos and photos, the power and ease of use of iOS 13, and A13 Bionic — the fastest chip ever in a smartphone that quickly handles the tasks that matter most to people every day,’ said Phil Schiller, Apple’s senior vice president of Worldwide Marketing 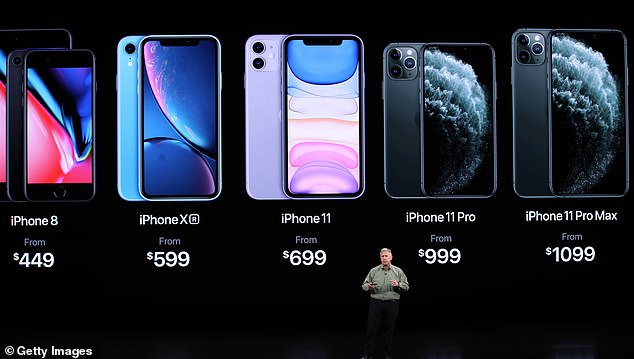 The A13 Bionic chip will allow for better image processing and enable all of the iPhone 11 models to run high-resolution games offered through Apple Arcade.

In addition to increasing the speed of the phone, Apple says that it’s new chip is also more efficient than its predecessor.

It achieves an hour more battery life than the iPhone Xr, which was said to have the ‘longest battery life ever’ when it was released last year.

According to Apple, the phone’s chip can process 1 trillion operations per second.

Unlocking your phone with FaceID will also be a much faster process, Apple says.

The phone also comes in several new colors, including purple, green, yellow, black, white and ‘Product Red’ and is water resistant for as long as two minutes at a depth of up to two meters.