A Michigan-based couple, who once weighed more than 500lbs combined, have shared their incredible weight loss story.

Anne, 31, and Ralph, 32, Linsangan met in high school 16 years ago and immediately developed an unhealthy diet of gorging on fast-food eating out every single day.

After gaining a huge amount of weight the couple found it hard to conceive a baby, and therefore decided to lose weight and adapt a healthier lifestyle. 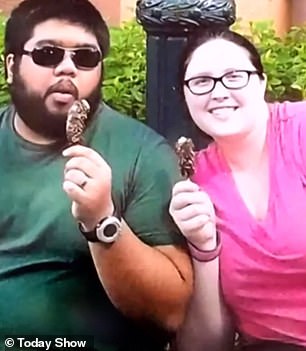 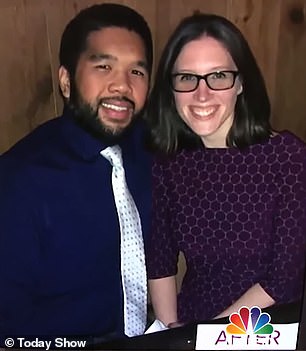 Before and after: Anne and Ralph Linsangan (pictured) appeared on the Today show to discuss their weight loss journey that saw them both losing almost half their body weight 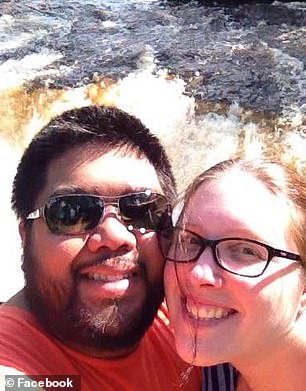 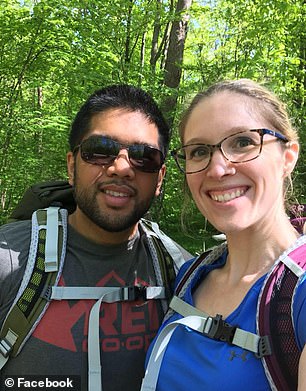 An amazing journey: The Michigan-based couple (pictured) lost an incredible combined 240lbs after joining a diet program to become healthy enough to have children 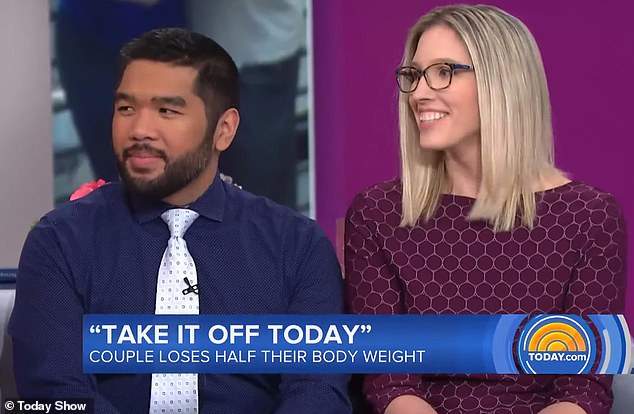 The couple revealed that when they got married they never cooked, because they ‘didn’t know how’ to.

Therefore, they frequently ate out, and never exercised.

Speaking to People Magazine, Ralph said that for dinner, he and Anne would get a little bit of food from every fast-food restaurant near their home.

‘Anne would go the other way where there was Arby’s, White Castle — and we’d pick up a little bit of everything. We’d have a little bit from every single fast food restaurant in a half-mile radius.’

At her heaviest, Anne weighed roughly 270lbs, while Ralph revealed that before dropping the weight, he weighed close to 300lbs.

Ralph said that the couple had been trying to have a baby for a couple of years, but nothing was working for them.

They joined a diet program, and together lost a combined 240lbs – 133lbs for Anne and 117lbs for Ralph.

Speaking on Thursday on the Today show, Anne said: ‘We were trying to have a family, and it wasn’t happening.’

She explained that she didn’t want doctor’s to tell her the reason she couldn’t conceive was because of her weight – something she could control. 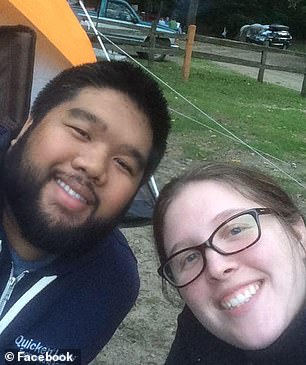 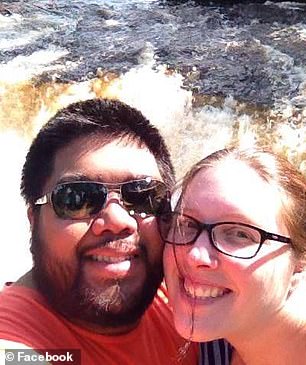 Bad habits: The couple revealed that before joining the diet program, they ate out every day when they got married. At her heaviest, Anne weighed 270lbs, and Ralph just under 300lbs 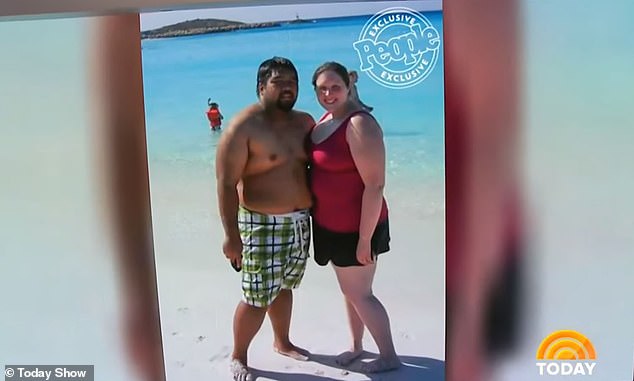 Time for change: Anne knew that she needed to make a lifestyle change when she and Ralph were finding it difficult to conceive a child for several years, so she joined WW

‘I didn’t want the next time I went to the doctor’s office for them to say: “It’s your weight,”‘ she added.

In an effort to lose weight, Anne joined diet program WW – formerly known as Weight Watchers, with her sister and mother.

Anne said: ‘It had been going really well. I was feeling great, and I was losing weight,  and I was learning how to cook.

However, Anne said that one Saturday when she went in for her regular WW meeting, she noticed something strange.

‘I went in for my Saturday meeting, ready to earn my 50lb award, and I had gained [weight].

‘It startled me,’ she added.

Two days later, she took a pregnancy test, and was delighted to find out that it was positive.

Anne and Ralph now have a three-year-old daughter called Ellie. 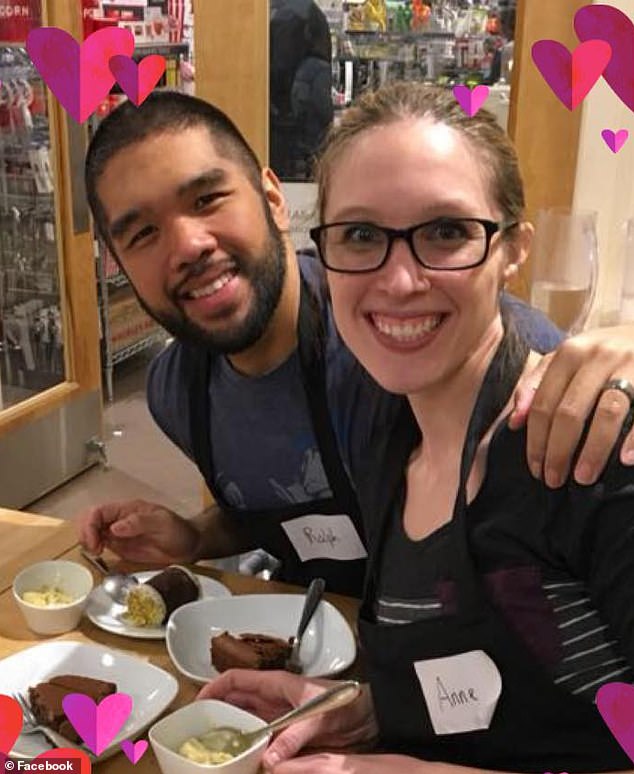 A positive change: The couple (pictured enjoying food together) swapped their unhealthy fast-food-based diet for one filled with clean foods including fruit, vegetables and healthy carbs 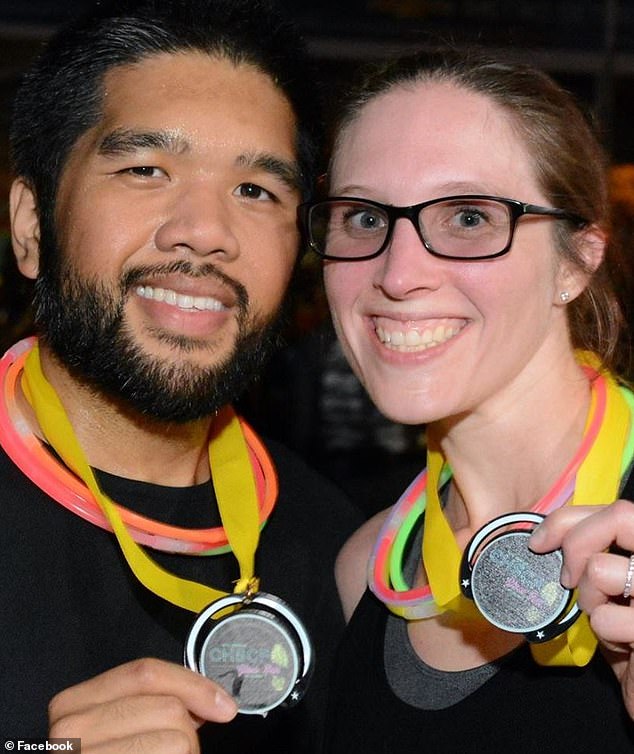 A different mindset: As well as eating healthy, the couple (pictured after completing a 5K run) now regularly exercise, and enjoy running and hiking together 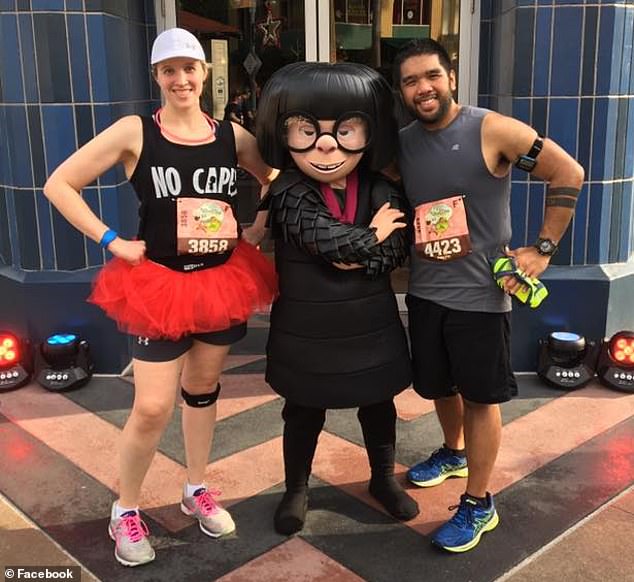 Strong: Anne and Ralph (pictured together at a sporting event) are happier and healthier than ever, and credit each other for instilling constant support with healthy eating and exercise

However, after attending one class with his wife because she had no one else to go with, Ralph stuck it out, and lost a huge amount of weight as well.

‘I started going just to be supportive, and then I started to lose weight,’ he said.

The couple said that they began talking about food together and what ‘points’ they were eating.

Ralph added: ‘It became really exciting to do it together.’

The pair then revealed what they would now eat in a typical day, including toast with banana for breakfast, fruit for snacks, chicken-noodle soup, chicken breasts, and vegetables.

And despite eating a mostly clean diet, for an occasional treat, Anne said that they enjoy ice-cream.

As well as changing their diet, Anne and Ralph now exercise regularly.

They enjoy running and going on hikes together, and they think it’s important for them to show their daughter how important exercise is.