Gonzalo Higuain watch: If the Argentine was more confident he would have taken the penalty… and he looked tired early in the second half against Sheffield Wednesday

Gonzalo Higuain made his Chelsea debut against Sheffield Wednesday in the Blues’ 3-0 FA Cup win.

Callum Hudson-Odoi, who handed in a transfer request on Saturday, scored and Brazil international, Willian, added a brace. 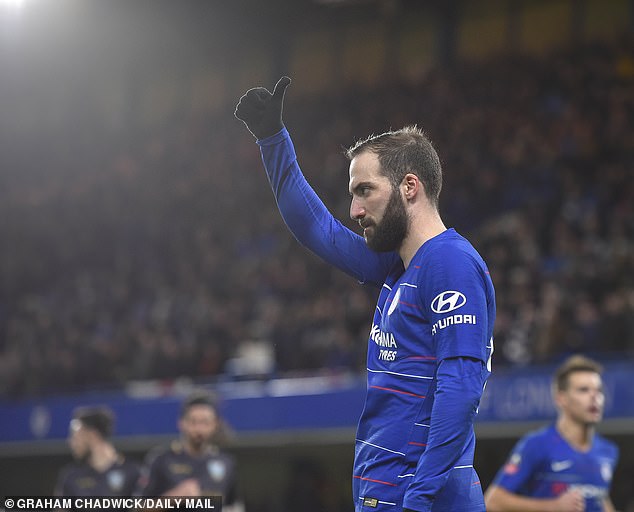 Pre-match: Out warming up on the Stamford Bridge pitch in Chelsea colours for the first time, Higuain draws a huge cheer from the Matthew Harding Stand as his first effort in the shooting practice flies beyond Robert Green into the bottom corner. Any early expectations from those supporters may be tempered by his next attempt, however; it is skied wildly over the bar and into the meshing protecting the fans.

5mins: The Argentine immediately takes up his position in between the two Sheffield Wednesday centre backs – captain Tom Lees and Jordan Thorniley. The pair are sticking close to him and he is struggling to register his first touch, failing to take a flick from Willian on the turn midway inside the Wednesday half with his back to goal.

9mins: The 31-year-old wins a free kick as Lees welcomes him to English football with a tackle from behind. Willian clips the free kick to the back post where the striker and Andreas Christensen are both lurking, but Keiren Westwood comes to claim. 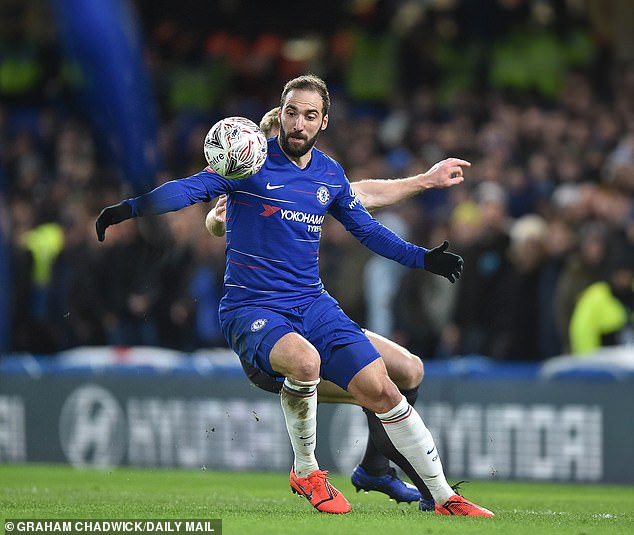 19mins: His first real chance. He latches on to a dissecting pass from Christensen in behind the defence and gets the ball under control, but he drags his shot from the right-hand side of the six-yard box across the face of goal. Replays show there was an important deflection to take it off target.

25mins: Chelsea are awarded a penalty. While Andre Marriner checks VAR, several Chelsea players, including Ethan Ampadu and Antonio Rudiger, approach Higuain and appear to encourage the No 9 to take it. Willian even looks to offer him the ball, before the striker retires to the edge of the D. A fully confident Higuain would bitten the Brazilian’s hand off if offered the chance.

39mins: For the second time Higuain steals a march on the Wednesday backline and brings down a ball from over the top. He can’t quite sort his feet out to get a shot away this time and has to recycle to Callum Hudson-Odoi, but every little touch helps as he feels his way around his first home appearance. Moments later a lofted ball from Mateo Kovacic is just too high for him. 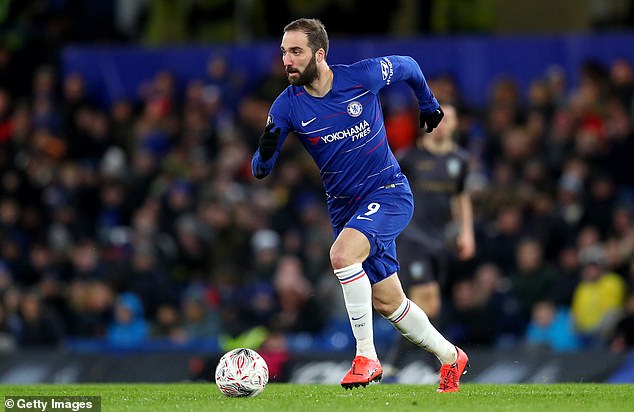 49mins: Chelsea win the ball back high in their own half and the ball is played into the feet of Higuain. Half-not expecting it, Higuain immediately returns it back inside his own half to Rudiger and Chelsea build from the back again. He looks a little tired already. Sarri checks his watch – we haven’t even played five minutes of the second half.

52mins: Chelsea are in down the left and Willian fizzes the ball back across goal. Marcos Alonso misses it entirely with his attempted heel flick and a combination of that and the grey shirt in front of him are enough to put of the Argentinean who misses his queue. He throws his arms in the air in frustration.

63mins: The hosts work the ball down the left and it’s played back to Ampadu who curls in a cross which which the No 9 gets on the end of. He can’t direct it on target however and it bobbles harmlessly wide.

79mins: With Olivier Giroud waiting on the touchline to replace him, Higuain makes one last bid to leave his mark on the game, but an exchange of passes on the edge of the area doesn’t quite come off. He leaves the pitch to warm applause from three sides of the ground.

Super Bowl will have first ever male cheerleaders