Hyundai is set to release a fleet of robo-taxis on the public streets of Irvine, California next week.

Although the crossovers will be equipped with a self-driving system from Chinese startup Pony.ai, a human will be seated at the wheel during this trial.

The South Korean carmaker is using what it deems ‘BotRide’ to study how people behave in an autonomous ride share. 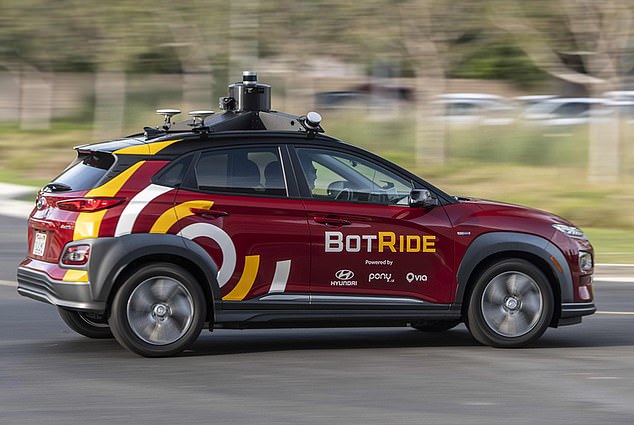 Hyundai is set to release a fleet of robo-taxis on the public streets of Irvine, California next week. Although the crossovers will be equipped with a self-driving system from Chinese startup Pony.ai, a human will be seated at the wheel during this trial

To summon the robotic vehicle, customers will order rides through a smartphone app, which will direct passengers to nearby stops for pickup and drop-off.

The service is set to start November 4 and will use Hyundai KONA Electric SUV – all rides will be free for customers.

To summon the robotic vehicle, customers will order rides through a smartphone app, which will direct passengers to nearby stops for pickup and drop-off

‘We are going to learn about ecosystems, where the vehicles travel and optimize the customer experience.’

‘BotRide is another example of Hyundai’s ongoing efforts to actively build expertise in mobility technology as well as the company’s commitment to providing more user-friendly mobility services to customers.’

Pony.ai is one of only four companies allowed to test its technology on California’s public streets, the others are Waymo, AutoX, and Zoox.

Hyundai has also partnered with Via in designing the app, which uses algorithms to enable multiple riders share the same vehicle.

In addition to self-driving capabilities, BotRide is validating its user experience in preparation for a fully driverless future.

BotRide launches with multiple popular destinations where a passenger may hail a ride using the BotRide app.

BotRide’s technology prioritizes passenger-to-system interactions such as automated onboard passenger verification, giving riders the chance to familiarize themselves with technologies expected to become commonplace in an autonomous mobility future. 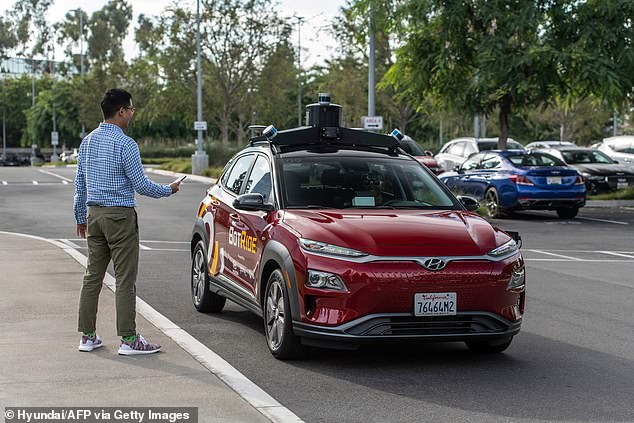 In addition to self-driving capabilities, BotRide is validating its user experience in preparation for a fully driverless future

HOW DO SELF-DRIVING CARS ‘SEE’?

Self-driving cars often use a combination of normal two-dimensional cameras and depth-sensing ‘LiDAR’ units to recognise the world around them.

However, others make use of visible light cameras that capture imagery of the roads and streets.

They are trained with a wealth of information and vast databases of hundreds of thousands of clips which are processed using artificial intelligence to accurately identify people, signs and hazards.

In LiDAR (light detection and ranging) scanning – which is used by Waymo – one or more lasers send out short pulses, which bounce back when they hit an obstacle.

These sensors constantly scan the surrounding areas looking for information, acting as the ‘eyes’ of the car.

While the units supply depth information, their low resolution makes it hard to detect small, faraway objects without help from a normal camera linked to it in real time.

In November last year Apple revealed details of its driverless car system that uses lasers to detect pedestrians and cyclists from a distance.

The Apple researchers said they were able to get ‘highly encouraging results’ in spotting pedestrians and cyclists with just LiDAR data.

They also wrote they were able to beat other approaches for detecting three-dimensional objects that use only LiDAR.

Other self-driving cars generally rely on a combination of cameras, sensors and lasers.

An example is Volvo’s self driving cars that rely on around 28 cameras, sensors and lasers.

A network of computers process information, which together with GPS, generates a real-time map of moving and stationary objects in the environment.

Twelve ultrasonic sensors around the car are used to identify objects close to the vehicle and support autonomous drive at low speeds.

A wave radar and camera placed on the windscreen reads traffic signs and the road’s curvature and can detect objects on the road such as other road users.

Two long-range radars on the bumper are used to detect fast-moving vehicles approaching from far behind, which is useful on motorways.

Four cameras – two on the wing mirrors, one on the grille and one on the rear bumper – monitor objects in close proximity to the vehicle and lane markings.

‘The BotRide pilot represents an important step in the deployment and eventual commercialization of a growing new mobility business.’

‘In addition to the technology partners powering BotRide, the broader city and community ecosystem have also played an important role in making BotRide possible.’

‘The BotRide pilot can serve as an example of how cities and companies can come together to truly enable smart cities and smart transportation systems of the future.’

Brighton and Hove Albion: a correction