How solar winds pick up HEAT as they travel through space: ‘First’ direct measurements reveal energy is transferred from electromagnetic fields to the stream of particles

Direct measurements of how energy is transferred from chaotic electromagnetic fields in space to the solar wind have been taken for the first time, experts say.

It was thought that a process called Landau damping was responsible for energising electrons in the solar wind and heating up interplanetary space.

Data taken from a NASA satellite has now measured the process in action and confirmed the theory, researchers say.

An illustration of the MMS spacecraft measuring the solar wind plasma in the interaction region with the Earth’s magnetic field. A new study explains how energy is transferred from electromagnetic fields in space to the particles that make up solar winds which pick up heat.

Scientists from Queen Mary University of London (QMUL) say the finding gives us a greater understanding about the heating of solar winds as they travel through space.

Solar wind is the stream of charged particles, or plasma, that comes from the Sun and fills our entire solar system.

Learning about these particles in solar winds is vital for understanding interstellar matter, radiation that exists in space and the disks of plasma surrounding black holes.

‘Plasma is by far the most abundant form of visible matter in the universe, and is often in a highly dynamic and apparently chaotic state known as turbulence,’ said lead author Dr Christopher Chen, from QMUL.

‘This turbulence transfers energy to the particles in the plasma leading to heating and energisation, making turbulence and the associated heating very widespread phenomena in nature.’

The MMS is located in the solar wind and measures the fields and particles streaming past.

Landau damping is the name of the phenomenon responsible for the transfer of energy from an electromagnetic wave into the charged particles of the plasma of the solar wind.

The process was first identified by the Nobel-prize winning physicist Lev Landau.

He found that when a wave travels through a plasma, an ionised gas consisting of ions and electrons, these charged particles are travelling at the same speed as the electromagnetic wave.

Energy from the wave is then absorbed by the solar wind’s charged particles and this reduces the energy (damping) of the wave itself.

This damping has been measured previously but it was not known whether it would work in the complex plasmas that occur in space. 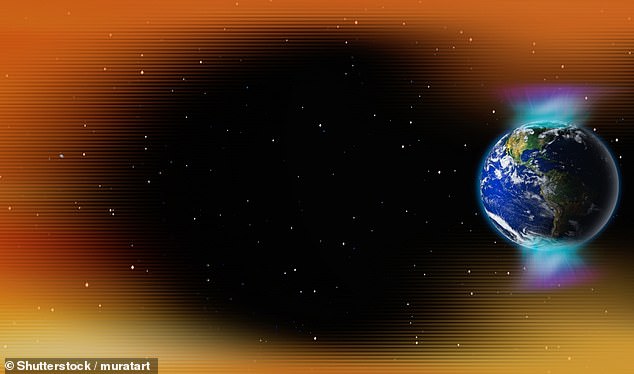 Across the universe, matter is in an energised plasma state at far higher temperatures than expected.

For example, the solar corona is hundreds of times hotter than the surface of the sun, a mystery which scientists are still trying to understand.

‘In this study, we made the first direct measurement of the processes involved in turbulent heating in a naturally occurring astrophysical plasma,’ said Dr Chen.

‘We also verified the new analysis technique as a tool that can be used to probe plasma energisation and that can be used in a range of follow-up studies on different aspects of plasma behaviour.’

Aside from that, the research also paves the way for the technique to be used on future missions on other areas of the solar system.

For example, NASA’s Parker Solar Probe is beginning to explore the solar corona and plasma environment near the Sun for the first time.

The study was published in Nature Communications.

HOW IS THE SOLAR WIND FORMED?

The sun and its atmosphere are made of plasma – a mix of positively and negatively charged particles which have separated at extremely high temperatures, that both carries and travels along magnetic field lines.

Material from the corona streams out into space, filling the solar system with the solar wind.

But scientists found that as the plasma travels further away from the sun, things change.

Views of the solar wind from NASA’s STEREO spacecraft (left) and after computer processing (right). Scientists used an algorithm to dim the appearance of bright stars and dust in images of the faint solar wind

The sun begins to lose magnetic control, forming the boundary that defines the outer corona – the very edge of the sun.

The breakup of the rays is similar to the way water shoots out from a squirt gun.

First, the water is a smooth and unified stream, but it eventually breaks up into droplets, then smaller drops and eventually a fine, misty spray.

A recent Nasa study captured the plasma at the same stage where a stream of water gradually disintegrates into droplets.

If charged particles from solar winds hit Earth’s magnectic field, this can cause problems for satellite and communication equipment.

Bitcoin To Explode By 80% Before Halving According to Past Cycle...

Wildlife tourists on safari are damaging the health of elephants