The housing market is expected to fall by up to a sixth as thousands of Britons lose their jobs.

Yorkshire and East Anglia are expected to be the hardest hit with house prices dropping 16.5 per cent this year.

Next come the North-West and West Midlands with 16 per cent falls. The collapse in prices would take up to £38,000 off the price of an average UK home.

Struggle: The collapse in prices would take up to £38,000 off the price of an average UK home

The crash will be driven by the rental sector as the amount tenants can afford to pay plummets due to wage cuts and unemployment.

The market has also stalled because buyers are unable to purchase. The figures, published by the Cebr today, come after the same think tank warned that lockdown has shrunk economic activity by 31 per cent. 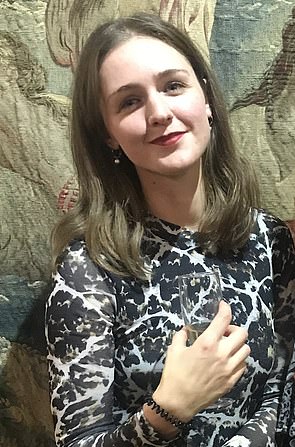 First-time buyer Susanna Wood, 29, was due to move in less than three weeks but isn’t sure if this will still go ahead

The report said: ‘Shortfall in incomes has a tremendous potential to disrupt the housing markets.’

First-time buyer Susanna Wood, 29, exchanged on her new home at the start of March with her boyfriend when coronavirus was not a major issue for Britain.

But now, says Susanna, who works for the savings app Plum, the couple don’t know if they can move home – and they have already given notice on their rented flat in London.

She has been in touch with her solicitors and has been told that, so far, the move is ‘progressing as planned’.

She said: ‘We’re hoping the move still goes ahead on that date and is not delayed as we don’t know what could then happen. It may be months before we move.

‘If it doesn’t we’re concerned about where we can go as the country has been told not to visit friends or family amid the coronavirus, let alone stay with them.’

Tom Matthews and his family were due to exchange on a new home but have now been left in limbo after their buyer put the brakes on the sale.

‘Our buyer is no longer willing to commit to an exchange or completion date, although he does iterate his desire to purchase the property – he just won’t say when or when he will make a decision on that,’ he said.

‘He is a pilot for an airline so has perhaps seen some of the worst of the virus from an economic standpoint.’ 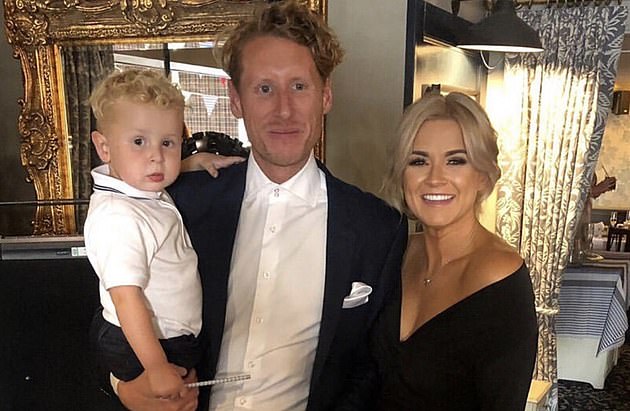 Tom was still hoping to move with his wife Daniella, 30, and two-year-old son, but he said that no longer seems possible.

He said: ‘For now at least, we are in limbo. I want to buy and move but our buyer isn’t committing and there is no use my relisting the property as we can’t arrange any viewings on it for the foreseeable.’

Unfortunately for Tom, who works for mortgage broker Coreco, the delay will mean his mortgage payments will increase by 50 per cent, as he’ll fall on to his lender’s standard variable rate at the end of this month.

‘I might consider taking up the three month mortgage payment holiday as a result though I haven’t as yet,’ he added.

Hardest hit will be regions like Yorkshire and Humberside with many workers in manufacturing, construction, retail and leisure.

Overall, the average UK house prices will fall 13 per cent. Scotland and the South East will fare best with drops of 10.5 per cent and 11 per cent.

It comes as the latest monthly reports from both Halifax and Nationwide showed that, although property prices were up 3 per cent in March, the market has come to a grinding halt.

This is partly thanks to nearly half of all mortgage deals now being pulled from the market in response to the coronavirus.

Estate agents have also been forced to close and property viewings and moves are either being cancelled or postponed indefinitely. 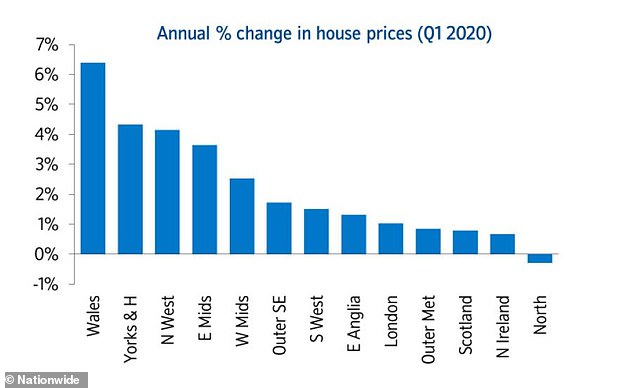 Thing of the past: How house prices were rising across the UK before the coronavirus outbreak

With estate agents closed, completions at a standstill, viewings at rock bottom and mortgage deals axed, people working in the housing sector remain deeply fearful for their prospects over the next few months.

Last week, the Royal Institution of Chartered Surveyors said the property market will need a shot in the arm once, lockdown is lifted, with a temporary ‘stamp duty holiday’ for buyers as one option.

Its latest sentiment survey showed that the three-month outlook for house sales has fallen to the lowest level, with a balance of 92 per cent of estate agents predicting lower sales. 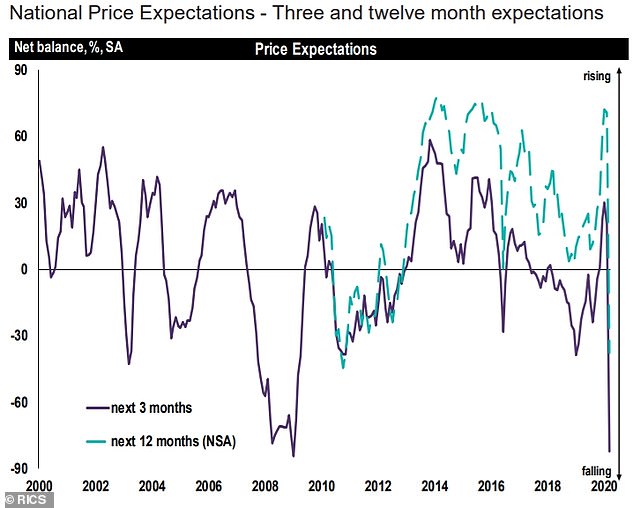 Jitters: Quarterly property price expectations are poor, experts at the Rics have said

While sentiment for the current quarter is gloomy, the longer term outlook remains generally upbeat and some experts think average property prices could rise by 2.5 per cent over the next five years. But, 42 per cent of insiders told the Rics they think prices will fall over the next year.

Nationwide’s index published earlier this month showed the average house price rising almost £3,500 in March to £219,583, but is based on the lender’s own mortgage approvals and mainly covers the period before Britain went into lockdown on 24 March. 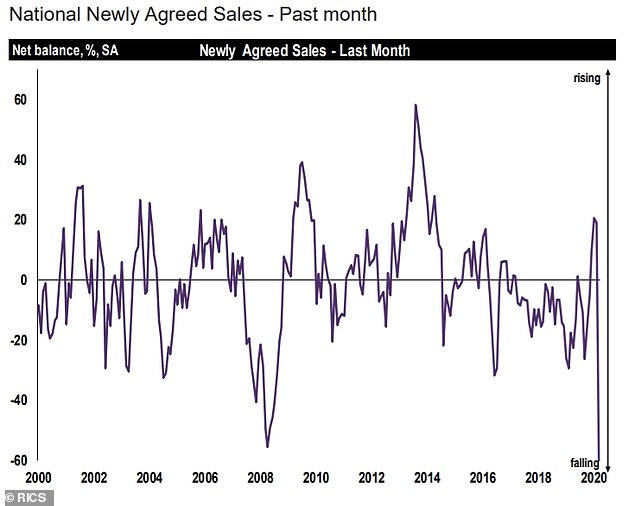 Plummeting: This chart shows that the housing market has ground to a halt, with sales tumbling

Trying to move? What you can do

If you’re trying to move house and are unsure how the Government’s announcement will affect you, removal quote provider Reallymoving has put together the following advice:

· Be prepared to provide evidence of job security, something banks will be checking even more closely than usual.

· With surveyors currently unable to carry out valuation surveys, expect your application to be delayed.

· If you already have a mortgage offer in place, speak to your lender to check that the offer is still valid and that the level of borrowing you’re taking on remains manageable if your job situation has changed.

· If you have not yet exchanged, hold off for now. Spend this period of time ensuring that all queries have been answered and as much of the process has been completed as possible, so you’re ready to press the button and exchange as soon as the lockdown is lifted.

· If you have already exchanged and are due to complete within the next three weeks, speak to your solicitor as soon as possible to try and agree a new completion date beyond the lockdown period with all other parties.

· If you have already exchanged with a completion date beyond the next three weeks, monitor the situation closely. Ask your solicitor to begin conversations with other parties – you may need to act quickly to agree a new date if the lockdown period is extended.

· Money laundering checks, which require buyers to provide certified copies of proof of identity and proof of address documents, can currently still be carried out at the Post Office.

· There will be delays to searches as Local Authority offices go into lockdown and cannot physically carry them out. If searches on your purchase have not yet been completed, you may have to wait until lockdown restrictions are lifted.

· It will no longer be possible for a surveyor to carry out a survey on a property as this is considered non-essential activity. Buyers will need to wait for restrictions on movement to be lifted.

· The British Association of Removers has issued guidance to its members to postpone all moves during the lockdown period, except those which are already underway.

· While the vast majority of removals will now be delayed, movers can still get quotes and choose a removals firm in advance of their move.

· Surveys can be carried out over Facetime in order to provide removals quotes, which will take a little longer than an in-person visit. However, these may result in missing items, so be sure to double check the quote to make sure everything is included.

Rob Houghton, chief executive of Reallymoving, said: ‘Those who now unexpectedly find themselves at home with time on their hands, should use it wisely to get all their affairs in order. Do as much online research as possible, prepare your home and garden for sale and ensure you’re in the best position to move forward when the crisis subsides.’

The Resorts & Residences by CuisinArt Sold to New Owners, Announces...

Crypto market cap falls by $113B as Bitcoin price tumbles to...

Tesla to Enact 5-for-1 Stock Split