By Mail on Sunday Reporter

A blood cancer patient told he has seven years left to live has launched a hunt for a potentially lifesaving stem cell donor match.

Peter McCleave, 41, from Bunbury in Cheshire, was diagnosed with incurable myeloma in 2017.

The rare cancer develops from cells in the bone marrow – the spongy tissue found inside the bones – called plasma cells, which help protect the body against infection.

Stem cell treatment, which involves replacing damaged blood cells with a donor’s healthy ones, could help keep the illness at bay.

Peter McCleave, 41, (pictured with his two sons – Max, nine, and Seb, six) from Bunbury in Cheshire, was diagnosed with incurable myeloma in 2017

The married father of two sons – Max, nine, and Seb, six – hopes to help recruit 100,000 blood donors to find a match for himself and others with blood cancer.

Peter, who in September will drive across Europe in a £200 Ford Focus for blood cancer charity DKMS, said: ‘My best bet for serious remission is a blood stem cell donor.’

Making parks bigger could benefit the mental health of people living nearby, according to new research.

A study published in the journal Applied Geography found that city-dwellers living within 300 yards of a green space were happier than those further away.

The Newcastle University research discovered that every increase of 2½ acres in urban green space – about the size of a rugby pitch – was linked with a boost of eight percentage points in life satisfaction of those living nearby. 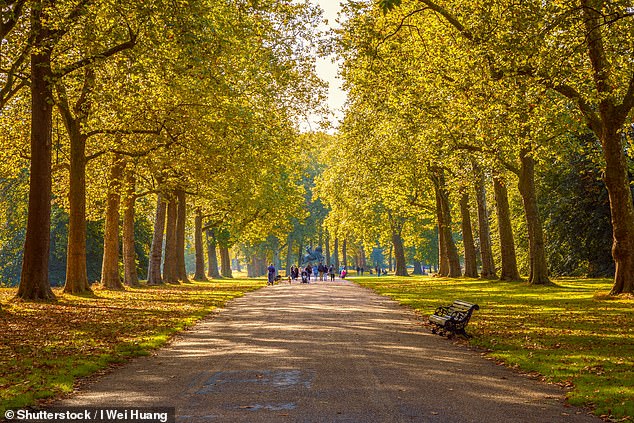 A study published in the journal Applied Geography found that city-dwellers living within 300 yards of a green space were happier than those further away (pictured, Hyde Park in London)

The study looked at 20,000 green spaces in London and included responses from more than 25,000 residents.

Why hating your ex is bad for your health

Staying friends with your ex may be a challenge – but it might be good for your health.

Researchers in the US discovered that people who blocked out ten former friends or lovers from their lives were at greater risk of depression and anxiety.

Psychologists from the State University of New York questioned 315 men and women about people they now considered ‘dead’. These so-called ‘extreme estrangers’ were found to be more anxious, depressed and emotionally unstable – and also more manipulative.

One in five millennials eat more takeaways than home-cooked meals, new research suggests. A third of 18-to-34-year-olds say they find making their own food boring, according to a survey of more than 2,000 UK adults by shopping app Ubamarket. More than a quarter say they have no time to rustle up something in the kitchen.

Worryingly, 58 per cent of millennials were not confident of the ingredients that went into their takeout.

Britons devour an estimated 22 million fast-food and takeaway meals every week, despite evidence that eating too much processed food increases the risk of obesity.

JLo’s twins turn 12: All the times the singer gushed about...

NHS documentary reveals the tragic stories of patients on an overstretched...