Jack Legind, 25, could save more than £2,000 in student loan interest over five years if the Government swapped the ‘flawed’ retail prices index measure of inflation with CPIH

Debt-saddled university graduates could save thousands of pounds in interest charged on student loans if the Government follows through with proposals to scrap a flawed measure of inflation.

Chancellor Rishi Sunak will use tomorrow’s Budget to launch a six week consultation on replacing the retail prices index measure of inflation with the CPIH, a consumer prices index that takes into account the cost of housing, as early as 2025.

RPI is currently used to calculate interest on student loans, and has a flaw which has caused it to be an average of 0.8 percentage points higher than it should be over the last eight years.

This seemingly small figure could lead to students incurring more than £2,000 in interest on already substantial student loan balances over five years.

The Institute for Fiscal Studies previously estimated it could cost the Government £2billion a year to scrap above inflation interest rates on student borrowing and change the rate to the consumer prices index, an inflation measure very close to CPIH.

But many believe that would just be the cost of playing fair with students.

In January 2019, the House of Lords Economic Affairs committee called the refusal to fix RPI ‘untenable’, while its chair Lord Forsyth said: ‘This is not just a technical debate.

Jack Legind, a 25-year-old accounting and finance graduate of the University of Newcastle, could incur £2,021.83 less in interest over the next five years if the Government used CPIH rather than RPI to calculate student loan interest.

He owed £60,786.29 at the end of April 2019, according to his latest student loan statement, after he had a placement year and switched courses after his first year of university.

How does interest on student loans work?

The interest rate on student loans changes every September, and is pegged to the RPI figure from the previous March. From September 2019 student loans have increased by at least 2.4 per cent.

Student loan balances accumulate by RPI plus 3 per cent while students are studying and until the April following their graduation.

After that, it increases by RPI plus up to 3 per cent depending on earnings. The maximum figure kicks in at £46,305, meaning from that point borrowers would be incurring 5.4 per cent interest under the most recent figures.

Jack works as an accountant, and currently earns less than the £25,725 threshold at which graduates begin paying back their loans.

This means interest is currently added monthly at a rate of 2.4 per cent, the RPI figure from March 2019.

According to This is Money’s calculations, over five years using the lower CPIH figure to calculate student loan interest would mean Jack incurred £2,021.83 less compared to using RPI.

When This is Money told him about this difference, he said: ‘That’s mad. That’s quite a lot just for the interest.’

He added: ‘The only thing I’d say is that similar to the argument over tuition fees, given that so many people aren’t going to end up paying off their full loan, then I guess it doesn’t matter if it’s 2 per cent interest or 30 per cent, because it’ll just be written off after 30 years regardless of if you’ve got £1,000 or £500,000 left outstanding.

‘It’ll obviously affect people who are likely to pay it all off though.’

Although this assumes inflation rates remain where they are and does not account for repayments nor a yearly increase in earnings, which would see Jack pay back some of his loan but also incur more in interest, it shows that phasing out RPI as soon as 2025 could particularly benefit students with high student loan balances.

Moreover, the 0.6 percentage point gap between March RPI and CPIH is the smallest it has been since 2015-16.

Meanwhile Tara Hinchy, a 22-year-old graduate of the University of Reading who works for the NHS in Berkshire, could save over £1,700 if RPI was scrapped.

She currently owes £51,803.02, after a four-year degree which included a placement year.

According to her statement, she has incurred £6,915.02 in interest since she received her first maintenance loan payment in September 2015.

As she only graduated last summer, she will incur interest at RPI plus 3 per cent until April 2020, meaning her balance is currently accumulating 5.4 per cent interest monthly. 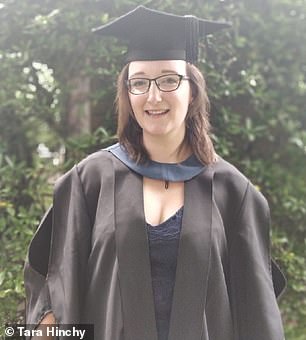 22-year-old Tara Hinchy graduated from the University of Reading in 2019. She is currently incurring interest on her student loans at RPI plus 3% – 5.4% a month

If the amount she owed incurred 2.4 per cent interest every month for the next five years and she did not make any repayments, as she currently doesn’t, her balance would sit at £58,400.74.

Lord Forsyth partnered with then-Commons Treasury Committee chair Nicky Morgan to write a letter to the UK Statistics Authority which said: ‘Instead of fixing this error (with RPI) however, you have designated RPI a “legacy measure”, making no further improvements to the index.

‘This is not a tenable position when the index remains in widespread use. In continuing to publish a statistic which you openly admit is flawed, we fear you may be in breach of your statutory duty.’

He told This is Money: ‘While a single general measure of inflation is being determined, the Government should switch to CPI for up-rating purposes in all areas where it is not bound by contract to use RPI, except for the interest rate on student loans.

‘We recommended in our Treating Students Fairly report that this should be set at the 10 year Gilt rate, thus reflecting the Government’s cost of borrowing.’

10 year Gilt, or UK Government Bond, rates are currently at 0.15 per cent, meaning the current rate of interest on student debt is 16 times what it would be under this proposal.

RPI is due to be phased out by 2030, but the consultation could see this brought forward by half a decade.

‘The amount saved would just about cover my monthly electricity bill’

Aside from students, the other biggest losers from the use of RPI are commuters and train passengers. ‘Regulated’ train fares, including season tickets, are pegged to the the RPI figure from the previous July, which in 2019 was 2.8 per cent.

Taylor Monaghan, 26, commutes from Canterbury, Kent, to London every day, via St Pancras. When he renewed his annual 12-month pass in December, which includes travelling within London, it cost him £7,416.

This saving would be boosted by the fact the price being compounded every year would also be a lower, on top of the lower inflation figure.

Assistant editor Lee Boyce worked out in 2017 that commuters had seen prices rise 7.3 per cent between 2011-2018 because of RPI, instead of rises being linked to CPI.

Taylor said saving £60 a year would ‘just about cover’ his electricity bill for a month, even if it doesn’t seem like a large sum in the context of a £7,000+ train fare.

He is currently studying for a Masters degree at the University of Southampton, and has currently £7,273.52 in outstanding postgraduate student loans, which also incur interest at RPI plus 3 per cent while studying.

He said the Government ‘shouldn’t be allowed’ to bill students using an inflation measure it knows is wrong.

While the consultation was proposed by former Chancellor Sajid Javid in a letter to Lord Forsyth, the Treasury confirmed to This is Money that it would still go ahead on Wednesday, despite the change in Chancellor.

The consultation is likely due to the fact that a considerable number of people also benefit from RPI, including holders of some index-linked Government bonds and some people enrolled in final salary pension schemes which are pegged to RPI.

‘The way that these increases work varies between pension schemes, and this consultation is most likely to be relevant for schemes that increase pension based on the annual growth in RPI.

‘Defined benefit schemes in the private sector often calculate pension increases in this way, but not all of them do.

‘One possible outcome from the RPI consultation is that this type of RPI-linked pension could end up growing more slowly in future, perhaps by about 1 per cent a year.

‘This change could end up reducing the overall value of a person’s pension over the whole of their retirement by over 10 per cent in some cases.

‘As well as pension scheme members, this could impact other different groups such as investors and there will be lots of lobbying from groups that could lose out from this consultation.’

Clean Air Strategy vows to crack down on drivers who leave...

Interest rate cut now on the cards as the pound takes...