Google has filed a patent for an AI-powered baby monitor to tell parents exactly what their child is up to at any given time.

The patent, published this month and uncovered by CNBC, details a device equipped with eye-tracking technology that would detect when a baby is awake or asleep.

It would also be able to differentiate between normal and abnormal behaviors based on sound and movement, and let parents know if the baby appears to be uncomfortable.

According to CNBC, the monitor described in the patent would come with ‘eye state analysis’ that relies on changes in the irises, pupils, and whites of the eye to identify a baby’s sleep state.

It would also take the baby’s body position into consideration, and be able to differentiate between standing, kneeling, climbing, or laying down.

‘If the baby is continually tossing and turning, the baby may be in some form of discomfort, such as being too hot or too cold,’ the patent states, according to CNBC.

The device could feature an HD video monitor.

While the patent filing doesn’t mean Google will definitely bring the high-tech baby monitor to fruition, the firm has expanded its push into the home in recent years with numerous smart devices.

In May, Google revealed it would be merging its Nest and Google Home products to bring more cameras into the smart home.

Google today launched the successor to its Nest Hub (formerly called the Home Hub), offering its Smart Display with Google Assistant and a bigger, 10-inch screen.

And, unlike those before it, the $229 Nest Hub Max has a built in camera that can recognize different faces.

Google first unveiled Nest Hub Max during its i/O conference in May, and the device is now available in the US, UK, and Australia. 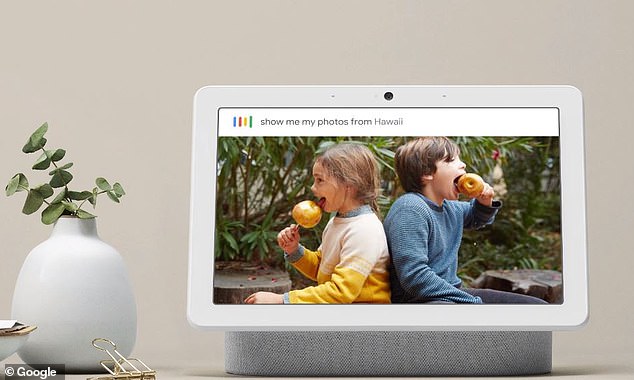 Google today launched the successor to its Nest Hub (formerly called the Home Hub), offering its Smart Display with Google Assistant and a bigger, 10-inch screen

It has a 10-inch HD touchscreen display and stands just over 7 inches high. The system is compatible with Android and iOS.

The Hub Max, newest in the line-up is the first to come with a camera, also offers a feature called Face Match that’s designed to further personalize the experience.

But, it’s got some concerned about what it means for privacy.

The feature takes the previous device’s voice-matching capabilities to the next level, adding the ability to recognize and remember each member of the family distinctly.

Astronomers may soon reveal the first EVER picture taken of a...