Chelsea head coach Maurizio Sarri is excited by the partnership developing between Gonzalo Higuain and Eden Hazard, who each scored twice in Saturday’s 5-0 win over Huddersfield.

Higuain, on loan from Juventus, opened the scoring and struck a fourth from 25 yards for his first Chelsea goals, either side of a Hazard penalty and composed finish. Their understanding thrilled Sarri. 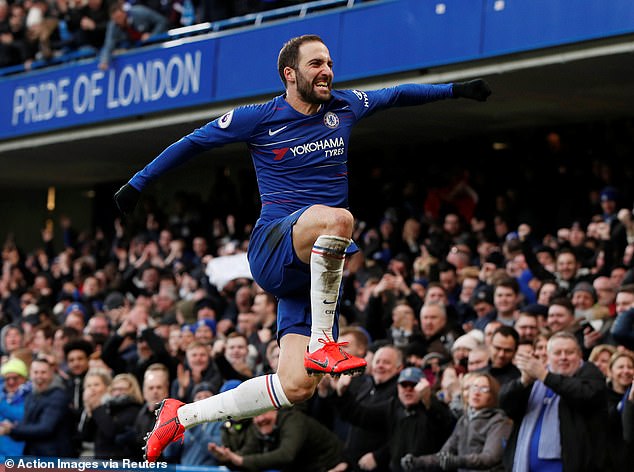 ‘On the pitch they are really very suitable to play one close to the other,’ the 60-year-old Italian said.

‘For us it’s very useful. For Higuain, he will be able to score, I think, a lot of goals.

‘I know very well that when he arrived he wasn’t at the top of the physical condition. Now he’s improving and I’m really very happy.’ 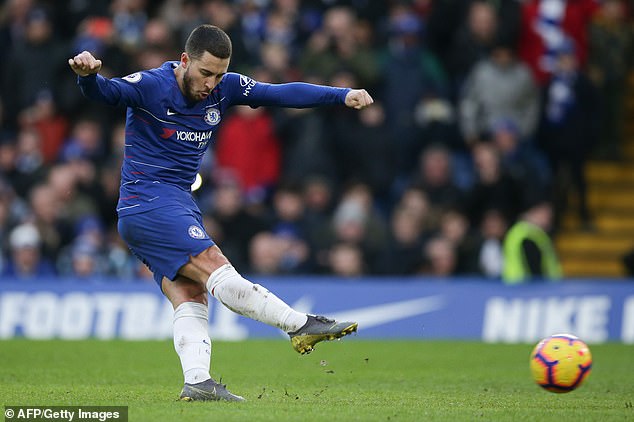 Higuain enjoyed the best season of his career under Sarri at Napoli, scoring 36 goals in 35 Serie A games, while Hazard had been singled out for criticism by the Blues boss of late.

The Belgium forward, whose long-term future remains in doubt with his contract expiring in June 2020, took his season’s tally to 15 goals. 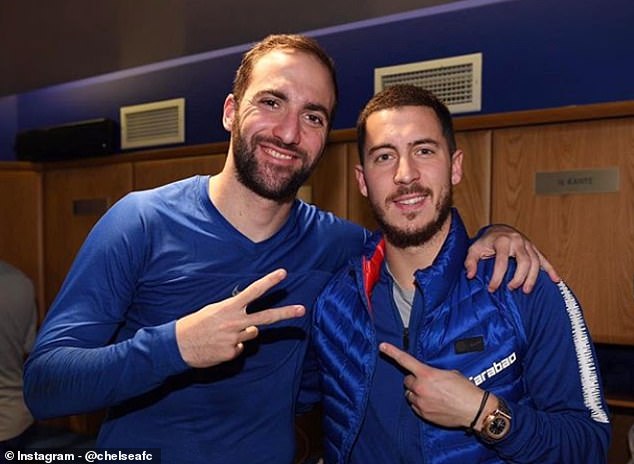 Sarri on Friday described himself as a ‘dreamer’ and refused to compromise on his footballing principles, despite five losses in the prior 12 league games.

He may point to this result as justification, but Huddersfield were limited opponents.

He added: ‘We started really very well. In the first 25, 30 minutes I saw my football.

‘We moved the ball very fast, with good movements without the ball. We were really dangerous every two minutes. 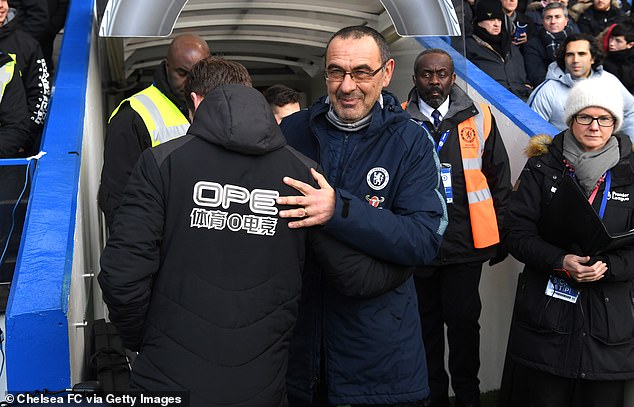 ‘We need consistency now. Today they were really very motivated, but we lost 4-0 in the last match, so we had to react.

‘We have to understand the level of the motivation must be the same in every match.’

Chelsea face a pivotal month which could determine the future of Sarri under owner Roman Abramovich, who is not renowned for his patience.

Next Sunday the Blues go to Manchester City, their opponents in the Carabao Cup final on February 24.

The Wembley date comes at the end of a week which sees the visits of Manchester United, in the FA Cup fifth round, and Malmo in the Europa League.

‘It will be very difficult. Also for our opponents I think,’ Sarri said.

Chelsea returned to fourth place in the Premier League, above Arsenal, who play Manchester City on Sunday, and their fight for Champions League qualification continues.

‘At the moment we have to be happy about our season because we’re in February and we’re involved in four different competitions,’ Sarri added.

Things might have been different had Huddersfield taken a sixth-minute lead.

Chris Lowe’s cross was headed just over by Aaron Mooy, but that was as good as it got for Town in Jan Siewert’s second match in charge.

Siewert said: ‘I don’t feel well at the moment. We came here to give a big fight.

‘The first chance to Aaron Mooy showed we wanted to win the game, but at the moment you can’t compare us to Chelsea.

‘We lost 5-0. That shows that Chelsea were quite angry after the Bournemouth game and showed it, so it was a bad time to play them.’

Chelsea’s penalty appeared soft after contact between Kachunga on Cesar Azpilicueta which began outside the box.

‘I’m not quite sure whether it was a penalty,’ said Siewert, who was uncertain at the severity of Isaac Mbenza’s calf injury.

‘Every Chelsea player went away. No one expected it.’

Rory McIlroy ‘committed to journey’ back to winner’s circle after just...