Waverton Multi-Asset Income: The investment fund that plays it conservative for income and growth

Investment fund Waverton Multi-Asset Income is designed for those who want a reasonable level of income from their investments, plus a little bit of capital growth on top. It under-performs in rising markets while outperforming when equity prices are sliding. It’s conservative with a small ‘c’.

It’s an investment modus operandi that has stood up reasonably well to recent stock market stresses.

Over the past month and three months, the fund has recorded respective gains and losses of 6.7 per cent and 3.7 per cent.

To put these numbers into perspective, the FTSE All-Share Index has registered a one-month gain of 7.2 per cent and a three-month fall of 19.8 per cent.

Over the past five years, the fund has generated an overall return of 24.1 per cent, compared with a 4.8 per cent gain made by the FTSE All-Share Index.

As the fund’s name implies, it is set up to deliver income from a variety of financial assets. The result is a £79 million portfolio with exposure to a mix of equities, government and corporate bonds, and ‘alternative’ assets – for example, infrastructure.

The fund pays out income quarterly, equivalent to around 3.5 per cent, although payments do not increase. Equities comprise 45 per cent of the fund. Investment manager James Mee, currently running the fund from Beaconsfield in Buckinghamshire, has few portfolio constraints.

In line with Waverton’s reputation as a global investor with more than £5 billion under management, he scours the world for investment opportunities. It means the 55 stocks that comprise the fund are somewhat eclectic, ranging from the familiar (Tesco) to the unfamiliar (a holding in absolute return fund Montlake Crabel Gemini Founder). ‘It’s a cautious investment mandate,’ says Mee.

‘What we’re trying to do is grow the fund’s capital ahead of inflation while delivering a sustainable level of income. In difficult times, as now, we also seek to provide investors with a level of downside protection.’

Mee says the fund has not made any ‘big’ asset changes since the world’s economy was brought to a shuddering halt by coronavirus. ‘In February, we reduced our equity holdings and increased our cash position, but in March and last month, we’ve been dripping a bit more money back into equities.’ 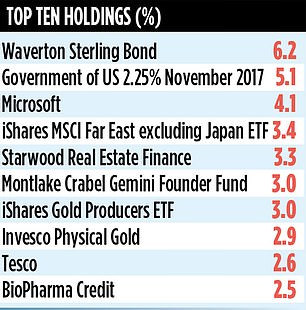 As a consequence, shares in companies AT&T, Barclays, Becton Dickinson, Chevron and Shell have been sold down. New stakes have been built in Amazon, Alphabet, Tesco and Microsoft – the fund’s biggest equity position. Other new holdings include a small position in Taiwan Semiconductor Manufacturing – bought because Mee believes it will benefit from greater demand for computer chips on the back of increased homeworking and automation.

Gold is a big theme in the fund with top-ten holdings in exchange traded funds that either track the gold price or the share price of leading gold producers. ‘In a deflationary world, there is no opportunity cost to holding gold,’ he says. Although dividend cuts are now the norm, Mee says the fund’s income remains robust.

He says that 85 per cent of the income due to the fund in the second quarter is safe – or ‘as safe as can be in today’s environment’ – while 14 per cent remains ‘at risk’.

Only one per cent will be cut. Its global focus has meant it has side-stepped the dividend purge in the UK.

The fund’s ongoing charge is a tad over one per cent. London-based Waverton Asset Management was previously known as JO Hambro Investment Management.