Girls perform better than boys in exams that last more than two hours — possibly because they are better at planning and remaining focused on the test.

Researchers compared the performance of students in tests in maths, science and reading and found that girls were typically better in reading tests.

Boys however, were superior in the maths and science evaluations.

But the study also uncovered that the gender gap in science and maths performance can narrow, and sometimes even reverse, when tests lasted over two hours.

Similarly, girls were seen to perform better in longer mathematics tests than in shorter ones.

This phenomenon may be contributing to the comparatively small number of women in science and tech fields, the study found.

Economists Pau Balart of the University of the Balearic Islands, Spain, and Matthijs Oosterveen of the Erasmus University Rotterdam in the Netherlands investigated how girls and boys perform differently in tests.

In the first part of their study, they examined data from the Programme for International Student Assessment, which assesses the performance of 15-year-old students in maths, science and reading every three years using a standardised test.

The duo looked at tests taken across 74 different countries between 2006 and 2015.

However, the researchers also found that, regardless of the nature of the tests, girls were able to exhibit more sustained their performance longer than boys.

In fact, for tests lasting more than two hours, the gender gap in maths and science test performance was either offset or reversed in more than 20 per cent of the countries that participate in the Programme for International Student Assessment (PISA). 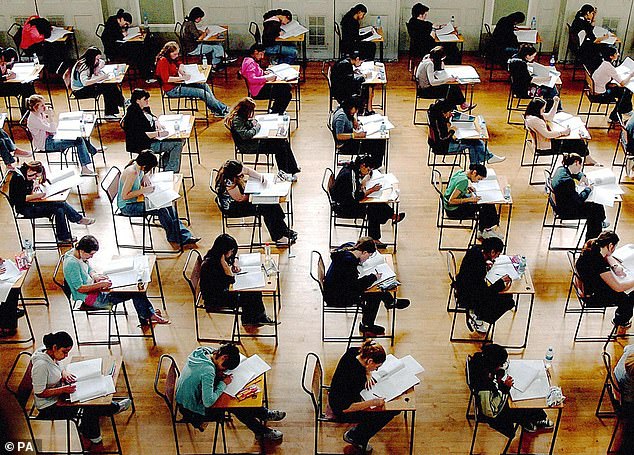 Researchers compared the performance of students in both standardised tests in three areas — maths, science and reading — and maths exams of different lengths (stock image)

For the second part of their study, Dr Balart and Mr Oosterveen examined data from a previous study that compared the performance of boys and girls in 441 different maths tests of various lengths.

Again, the researchers found that longer tests were associated with a smaller gender gap in maths performance.

The duo put forward three hypotheses as to why girls might perform better in longer tests.

Women, the researchers noted in their paper, ‘have been found to have more self-discipline, have fewer behavioural problems, be less overconfident, and show more developed attitudes towards learning.’

‘A second reason for the hypothesis is that male and female students may follow different strategies while completing a test,’ they added, noting that previous studies have suggested that women are better at planning.

Finally, women may be better suited to maintain effort throughout an exam, the researchers suggested.

These results suggest that test length may be a factor in why there are relatively low numbers of women working in science, technology, engineering and maths fields, where standardised test results greatly impact education and career choices.

The full findings of the study were published in the journal Nature Communications.

Some 26.6 per cent of boys’ entries were awarded at least an A grade, compared to 26.2 per cent for entries from their female peers.

The statistics also show that STEM subjects (science, technology, engineering and maths) are continuing to rise in popularity.

Boys are still more likely to study a STEM subject (science, technology, engineering and maths) than girls, but the balance is shifting.

But the data also shows that girls are closing in on the boys, with a 3.1 per cent increase in maths entries from female students (boys’ entries for the subject have risen 2.1 per cent) and a 6.9 per cent rise in physics (2.4 per cent for boys).

Before 2017, girls had traditionally led boys, though the gap had been narrowing since 2008.

Meanwhile the gap between the best-performing boys and girls has fallen slightly. The proportion of boys who got A* was 8.5 per cent, 0.9 percentage points higher than girls (7.6 per cent).

Some experts have claimed boys are doing slightly better than girls because of the reintroduction of end-of-year exams.

This is because boys are said to be less likely to work consistently during the year – and would rather throw everything into a final exam instead of continuous assessment.

In Northern Ireland, boys outperformed girls at the top A-level grade for the first time since it was introduced.They overtook girls by 0.4 per cent at the A* grade, first awarded in 2010.