and
Camilla Canocchi for Thisismoney.co.uk

The stores inside Chapelfield shopping centre in Norwich, Lakeside in Thurrock, Metrocentre in Gateshead and Victoria Centre in Nottingham are now expected to remain open.

The department store chain, snapped up out of administration in August by billionaire Mike Ashley for £90million, had earmarked these four shops for closure in November last year. 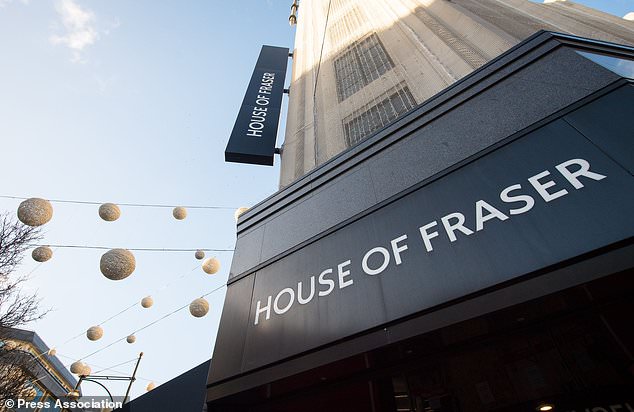 It follows a similar recent announcement about House of Fraser shops in Hull, Exeter and Manchester, which are also no longer going to be shut down.

However, House of Fraser’s Birmingham outlet may close down and closures have been announced for branches in Shrewsbury, Edinburgh and Swindon.

But today a spokesman for Intu said: ‘We confirm that following constructive discussions with Sports Direct, we have reached an interim agreement on four House of Fraser stores.’

Following his acquisition of the chain in August, Ashley pledged to save around 47 of House of Fraser’s 59 outlets. But Ashley has previously made public statements attacking the ‘greedy landlords’ of House of Fraser stores.

It is understood that many landlords are reluctant to agree to the low rents Ashley is demanding.

Ashley, who owns Newcastle United, has been enlarging its retail empire, having bought Evans Cycles and House of Fraser in cut price deals within the past six months.

Now, he is said to be looking to merge the recently collapsed HMV chain with video game company Game Digital, in which he has a 25.4 per cent stake.

He has made a bid for the beleaguered music retailer, which fell into administration just days after Christmas.

Ashley also owns Agent Provocateur, has a 27 per cent stake in fashion chain French Connection and a 29.7 stake in Debenhams.

Gordon Elliot under investigation after image of him sat on top...

3 reasons why Reef Finance, Bridge Mutual and Morpheus Network are...

Covid-19 Vaccine Made by AstraZeneca, Oxford Is Authorized by India

How do the economic spokes of Tour de France turn? This...