A woman has told of her holiday horror after being left both paralysed and blind following a five-day break to Mexico.

Mary Catherine Derin was born with excess fluid on the brain, hydrocephalus, and had a shunt fitted as a baby to relieve the pressure.

More than four decades later, Mrs Derin noticed her arms and legs were weak while celebrating her wedding anniversary with her husband Tony, 48, in Mexico.

The now 46-year-old dismissed her symptoms as dehydration or the start of flu. But within hours, she was completely paralysed from the waist down.

By coincidence, the former fitness instructor then developed blurred vision, which is thought to be completely unrelated to her GBS.

The shunt she was fitted with as a newborn malfunctioned, which allowed pressure to build-up over her optic nerve. The ordeal has left Mrs Derin ‘legally blind’ and only able to walk with a cane. 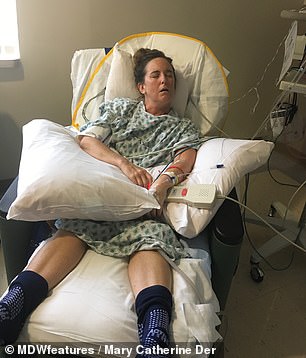 Mary Catherine Derin suffered a holiday from hell after a five-day break to Mexico in May 2017 left her paralysed and blind. She is pictured left with her husband Tony in 2015. Mrs Derin is pictured right during a three-month stint in hospital being treated for Guillain Barré Syndrome 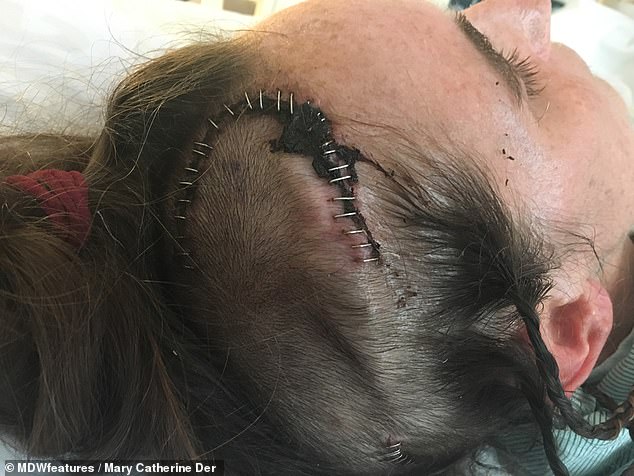 As well as suffering from Guillain Barré Syndrome, Mrs Derin also became ‘legally blind’. This is thought to have occurred due to a malfunctioning shunt she had fitted as a newborn to relieve pressure on her brain. She is pictured in June 2017 after surgery to have the shunt replaced

‘The doctors said it was an incredibly rare situation.’

By the time Mrs Derin was five years old, doctors believed she had outgrown her hydrocephalus and no longer needed her shunt, however, it was not removed.

‘I was born with hydrocephalus and had a shunt placed when I was 28 days old,’ she said. ‘The shunt drained the excess fluid from my brain.’

Life carried on as normal for more than 40 years, before Mrs Derin suddenly developed a weakness in her limbs while in Mexico in May 2017.

‘The morning after we arrived, I started noticing weakness in my arms and I began to lose feeling in my legs,’ she said. ‘By that evening I could no longer walk.

‘We thought I was coming down with the flu [but] we ended up going to the onsite doctor.

‘He thought I was dehydrated so he gave me IV fluids. When that didn’t help, we knew something was wrong.’

Mrs Derin soon starting suffering ‘spells of blurry vision’, which she also put down to flu.

‘I would just have moments when things would go black and then come back blurry,’ she said. 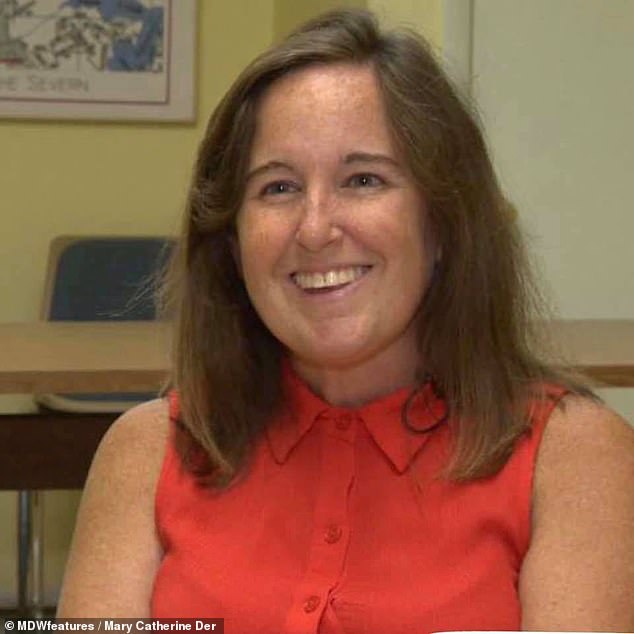 Pictured in July last year, Mrs Derin noticed her arms and legs were weak while celebrating her wedding anniversary with her husband Tony in May 2017, which she dismissed as flu 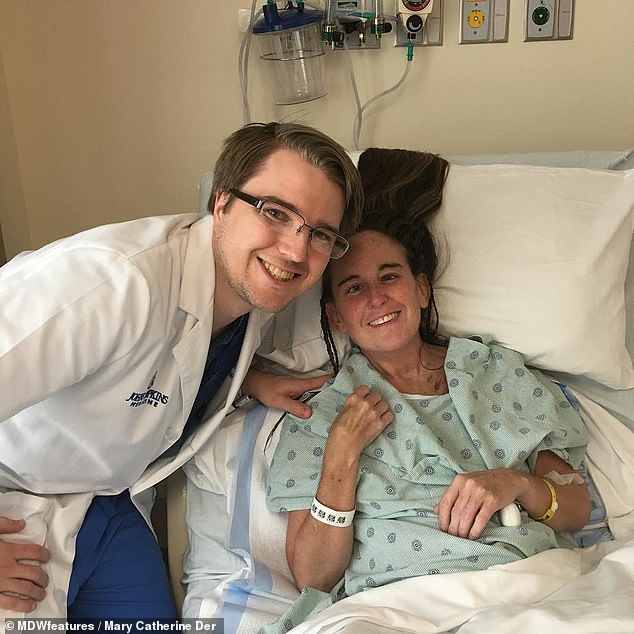 Mrs Derin is pictured in a specialist hospital in June 2017. It was here that a neurosurgeon discovered the pressure in her brain was pressing on her optic nerve, leading to vision loss

WHAT IS GUILLAIN-BARRÉ SYNDROME?

Symptoms usually start with a tingling sensation in the leg, which may spread to the arms and upper body.

In severe cases, the person can become paralysed.

The condition can be life-threatening if it affects a person’s breathing, blood pressure or heart rate.

GBS’ cause is unknown, but it usually occurs after a viral infection. The NHS states campylobacter infections have been known to trigger GBS.

There is no cure.

Mrs Derin flew home but needed ‘full assistance to do everything’.

‘Over the course of five days I went from being able to walk to being completely paralysed from the waist down,’ she said.

‘When we got home, we went to the emergency department and, after being there for eight hours, I was admitted.

‘They did a lumbar puncture and at that point they determined I had Guillain Barré syndrome.’

This treatment is made up of donated blood that contains healthy pathogen-fighting proteins. These stop harmful antibodies from damaging nerves.

But doctors were baffled as to what was causing Mrs Derin’s blurred vision.

‘After a couple of weeks, I transferred to a new hospital at the start of June,’ she said.

‘Within a day of being admitted to a new hospital, I was completely and totally blind.

‘The neurosurgeon determined my shunt, which had been deemed no longer necessary, was still necessary, and had been malfunctioning for quite some time.

‘This led to pressure build up on the optic nerves, which killed them and led to my vision loss.’

Mrs Derin was rushed into emergency surgery, where her shunt was replaced.

‘They hoped the pressure would slowly be released and my vision would return over time,’ she said.

The operation helped to ease some discomfort in Mrs Derin’s neck, however, it did little to improve her sight.

‘While I no longer had pain, I was still blind and had no use of my legs,’ she said. 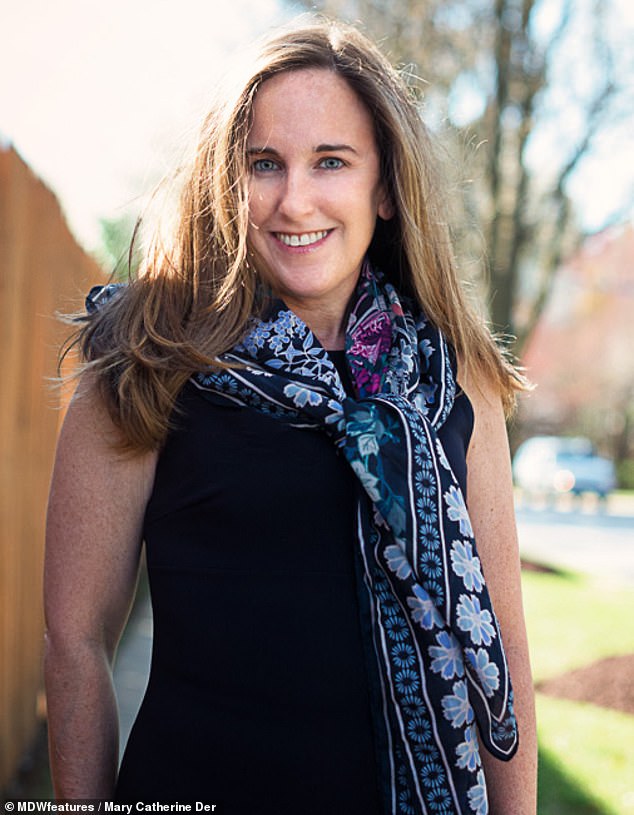 Pictured in April 2017, Mrs Derin appeared healthy and made a living as a fitness instructor 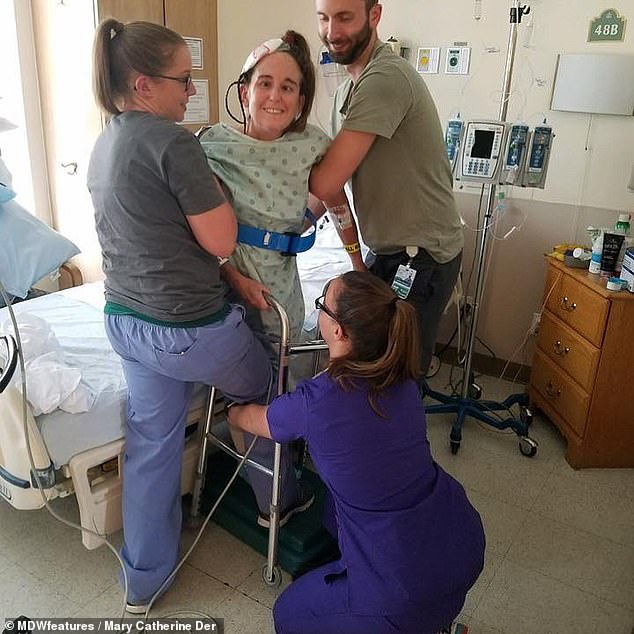 Mrs Derin spent three months in hospital, where she did regular physical therapy (pictured) to help her relearn how to walk. Two years on from the ordeal, she still requires a cane

Hydrocephalus is a build-up of fluid in the brain, which can damage tissue.

Aside from an abnormally-sized head, other symptoms can include headache, nausea, vomiting, confusion and vision problems.

Hydrocephalus’ cause is usually unknown but may be due to issues with cavities in the brain or an underlying health problem that affects blood flow, such as heart disease.

It can also be acquired by damage to the brain due to a head injury, stroke or tumour.

Treatment is shunt surgery, which involves implanting a thin tube into the brain to drain away excess fluid to another part of the body where it can be absorbed into the bloodstream.

If untreated, hydrocephalus can be fatal due to increased pressure compressing the brainstem, which is responsible for regulating heart rates and breathing.

A patient’s prognosis after surgery depends on their age and general health.

Mrs Derin spent three months in hospital, where she did regular physical therapy to help her relearn how to walk.

‘When I was released, I could use a walker for short distances, but when we went out, I still needed a wheelchair because I got tired very easily,’ she said.

‘However, within a month of coming home, with extensive rehab and physical therapy, I could walk with just a cane.’

Six months on, Mrs Derin had regained some vision, however, her sight was still distorted.

She was also unable to distinguish between different colours and just saw everything as a muted brown.

More than two years after the incident, her health is not much better.

‘I had to modify a lot of things I did before, for example, I can no longer drive because of my blindness. Sometimes, I just have to do certain things differently.’

Mrs Derin was also forced to give up her career as a fitness instructor.

‘It’s been very difficult for me to adjust to losing so much strength and no longer having the mobility I had before,’ she said.

‘However, I’m very grateful to have regained a small amount of my vision back and have the ability to walk now, considering that when I was hospitalised, I was completely blind and paralysed from the waist down.’

Mrs Derin is speaking out to encourage others who are going through a difficult time to stay strong.

‘Life does not offer roadblocks, it offers detours,’ she said. ‘It’s all in how you look at something – it could always be worse.’

Find out more at Mrs Derin’s Instagram page and blog. 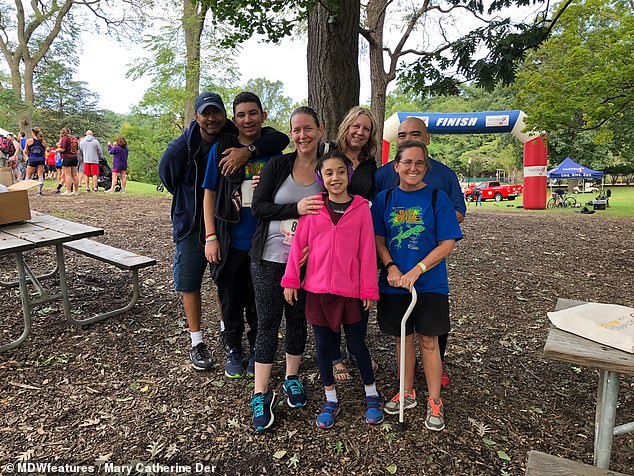 Determined to remain active, Mrs Derin is pictured right with her cane, surrounded by loved ones, while on holiday in September last year. She has a ‘small amount of vision back’ 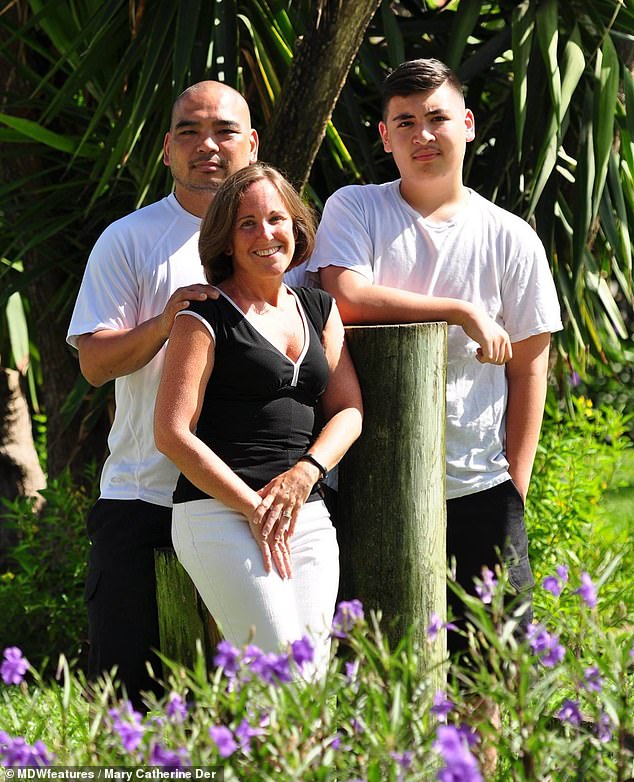 Pictured in July 2015, Mrs Derin never imagined the ordeal she was about to go through 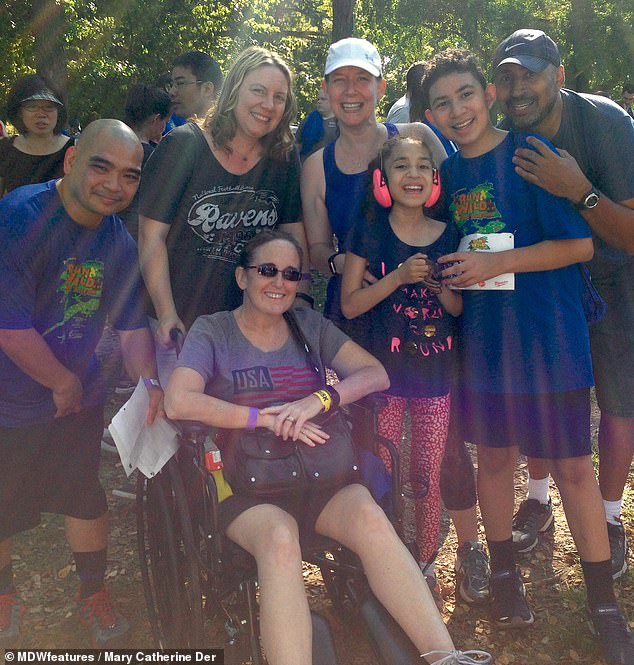 Chelsea boss Maurizio Sarri vows to stick with Plan A despite...