By Mark Prigg For Dailymail.com

As panoramic images go, it might be the most impressive one ever created.

It says the incredible image is ‘the largest panoramic view of the fire and fury of star birth in the distant universe.’

NASA says the incredible image is ‘the largest panoramic view of the fire and fury of star birth in the distant universe.’ The images uses ultraviolet light to create a never-before seen image of part of the constellation Fornax known as the GOODS-South field.

‘Hubble’s ultraviolet vision opens up a new window on the evolving universe, tracking the birth of stars over the last 11 billion years up to the busiest star-forming period in the cosmos, which happened about three billion years after the big bang,’ NASA says.

‘Combined with data in infrared and visible light from Hubble and other space- and ground-based telescopes, astronomers have assembled the most comprehensive portrait yet of the universe’s evolutionary history.’

It is from the Hubble Deep UV (HDUV) Legacy Survey.

By comparing images of star formation in the distant and nearby universe, astronomers can get a better understanding of how nearby galaxies grew from small clumps of hot, young stars long ago.

This mosaic is 14 times the area of the Hubble Ultraviolet Ultra Deep Field released in 2014. 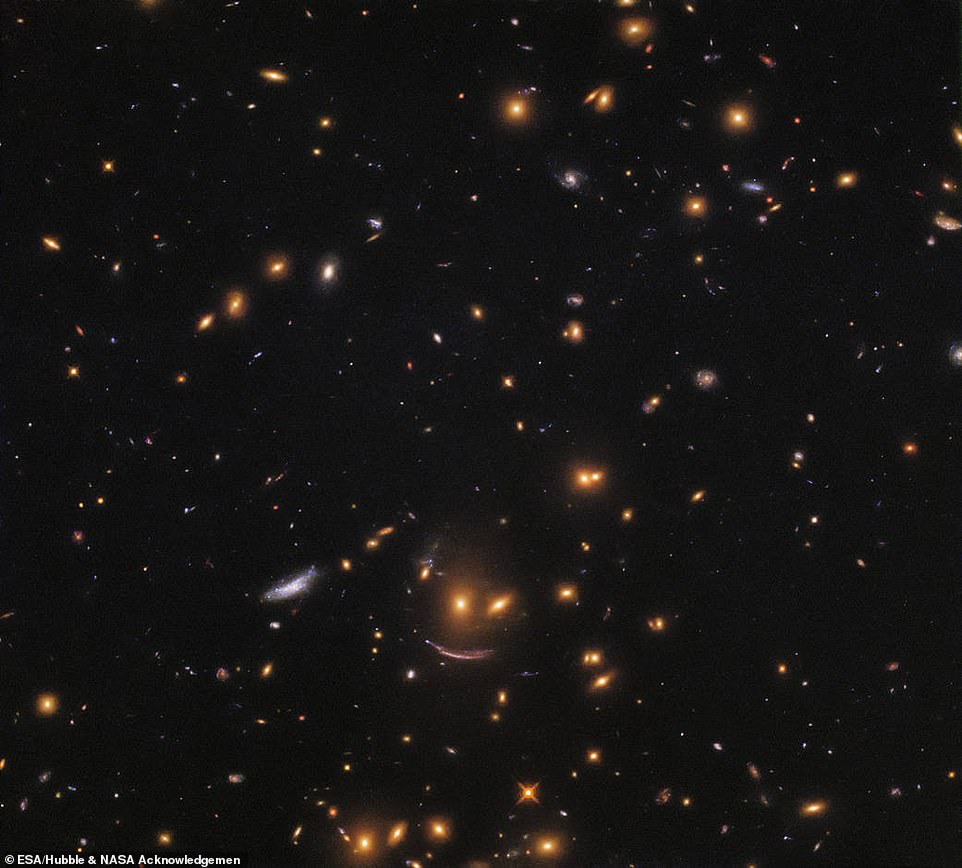 Earlier this year Hubble revealed a new image of a ‘smiling galaxy cluster’.

However, in among the many galaxies, ‘is a formation of galaxies akin to a smiling face’ NASA says.

Surrounded by a patch of space filled with galaxies of all shapes, colors and sizes, the image reveals two yellow-hued blobs hang atop a sweeping arc of light.

NASA says the ‘mouth’ is created by a trick of the light.

‘The lower, arc-shaped galaxy has the characteristic shape of a galaxy that has been gravitationally lensed — its light has passed near a massive object en route to us, causing it to become distorted and stretched out of shape,’ it said. 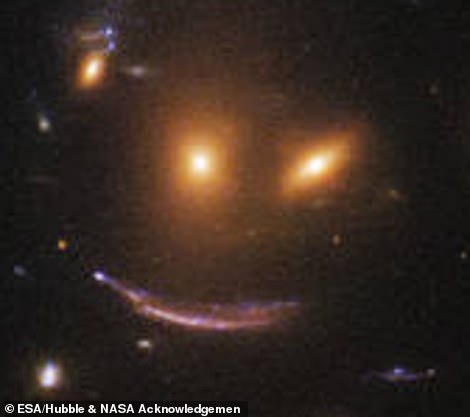 NASA says the ‘mouth’ is created by a trick of the light.

Hubble captured this image in an effort to understand how new stars spring to life throughout the cosmos.

‘WFC3 is able to view distant galaxies at an unprecedented resolution — high enough to locate and study regions of star formation within them,’ NASA said.

Stars are born within giant clouds of gas.

These massive clouds, or stellar nurseries, grow unstable and begin to collapse under gravity, becoming the seeds that will grow into new stars.

By analyzing the luminosity, size and formation rate of different stellar nurseries, scientists hope to learn more about the processes that can lead to the formation of a newborn star.

Studying nurseries within different galaxies will provide information about star formation at different points in time and space throughout the universe.

WHAT IS THE HUBBLE SPACE TELESCOPE?

The Hubble telescope was launched on April 24, 1990, via the space shuttle Discovery from Kennedy Space Centre in Florida.

It is named after famed astronomer Edwin Hubble who was born in Missouri in 1889.

He is arguably most famous for discovering that the universe is expanding and the rate at which is does so – now coined the Hubble constant.

Hubble has made more than 1.3 million observations since its mission began in 1990 and helped publish more than 15,000 scientific papers.

It orbits Earth at a speed of about 17,000 mph in low Earth orbit at about 340 miles in altitude.

Hubble has the pointing accuracy of .007 arc seconds, which is like being able to shine a laser beam focused on Franklin D. Roosevelt’s head on a dime roughly 200 miles away.

Woman who lives as full-time baby spends hundreds on nappies and...