Facebook tweaks its ‘why am I seeing this ad?’ feature to display more info and make it easier to understand, in bid to be more ‘transparent’ about your data

Facebook users interested in how the platform targets ads served on their feed are getting an added dose of transparency.

Added options will grant curious users even more granularity when they click on the platform’s ‘Why am I seeing this ad?’ button in an effort to imbue the platform with some widely desired transparency.

‘In the past, ‘Why am I seeing this ad?’ highlighted one or two of the most relevant reasons, such as demographic information or that you may have visited a website,’ reads a blog post from Sreethu Thulasi, a Product Manager at Facebook.

While many Facebook users have left the platform in the wake of a number of scandals, it’s unclear what effect added privacy will have on those that remain

‘Now, you’ll see more detailed targeting, including the interests or categories that matched you with a specific ad.’

According to Facebook, this will allow users to see not only why there being served an ad, but explanations into how that data was collected like what website or page they liked to generate the connection.

To get to this page, a user must click an ellipses at the top of an ad and then naviaget to ‘Why am I seeing this ad?’

Facebook will also give users details on which advertisers may have them in their cross hairs.

By diving into Facebook’s Ad Preferences tab users can see which advertisers have added them to lists and also whether or not they used that list to serve them marketing materials.

‘For example, a fitness studio that uploaded a list of client emails and used that for advertising could show up in this section,’ reads the blog post. 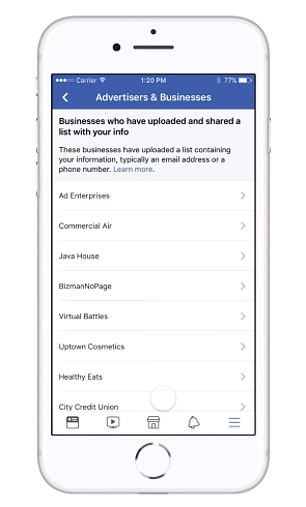 To get to this page, a user can click ‘Advertisers and Businesses’ in the ‘Ad Preferences’ page to view a list of ‘businesses who have uploaded and shared a list with your info.’

The list extends only to the last three months of businesses, however.

Added granularity in Facebook’s marketing methods and data collection are in line with a number of transparency and privacy initiatives launched in the wake of scandals like Cambridge Analytica and revelations regarding misinformation spread via the platform during the 2016 presidential election.

In the former incident, a pro-Trump political consulting firm scraped the private data of 87 million Facebook users without their consent.

The company recently set up a task force to stop interference in the 2020 census and presidential election and banned ads that discourage people from voting.

Whether the added information will have an substantive impact on Facebook’s practices with user data or users’ perception of the platform, however, remains to be seen.

Zuckerberg promised end-to-end encryption for all of its messaging services, which will be combined in a way that allows users to communicate across WhatsApp, Instagram Direct, and Facebook Messenger.

This he refers to as ‘interoperability.’

This could mean, for example, that users set messages to auto-delete after a month or even a few minutes.

‘Interoperability’ will ensure messages remain encrypted even when jumping from one messaging service, such as WhatsApp, to another, like Instagram, Zuckerberg says.

Facebook also hopes to improve users’ trust in how it stores their data.

Zuckerberg promised the site ‘won’t store sensitive data in countries with weak records on human rights like privacy and freedom of expression in order to protect data from being improperly accessed.’